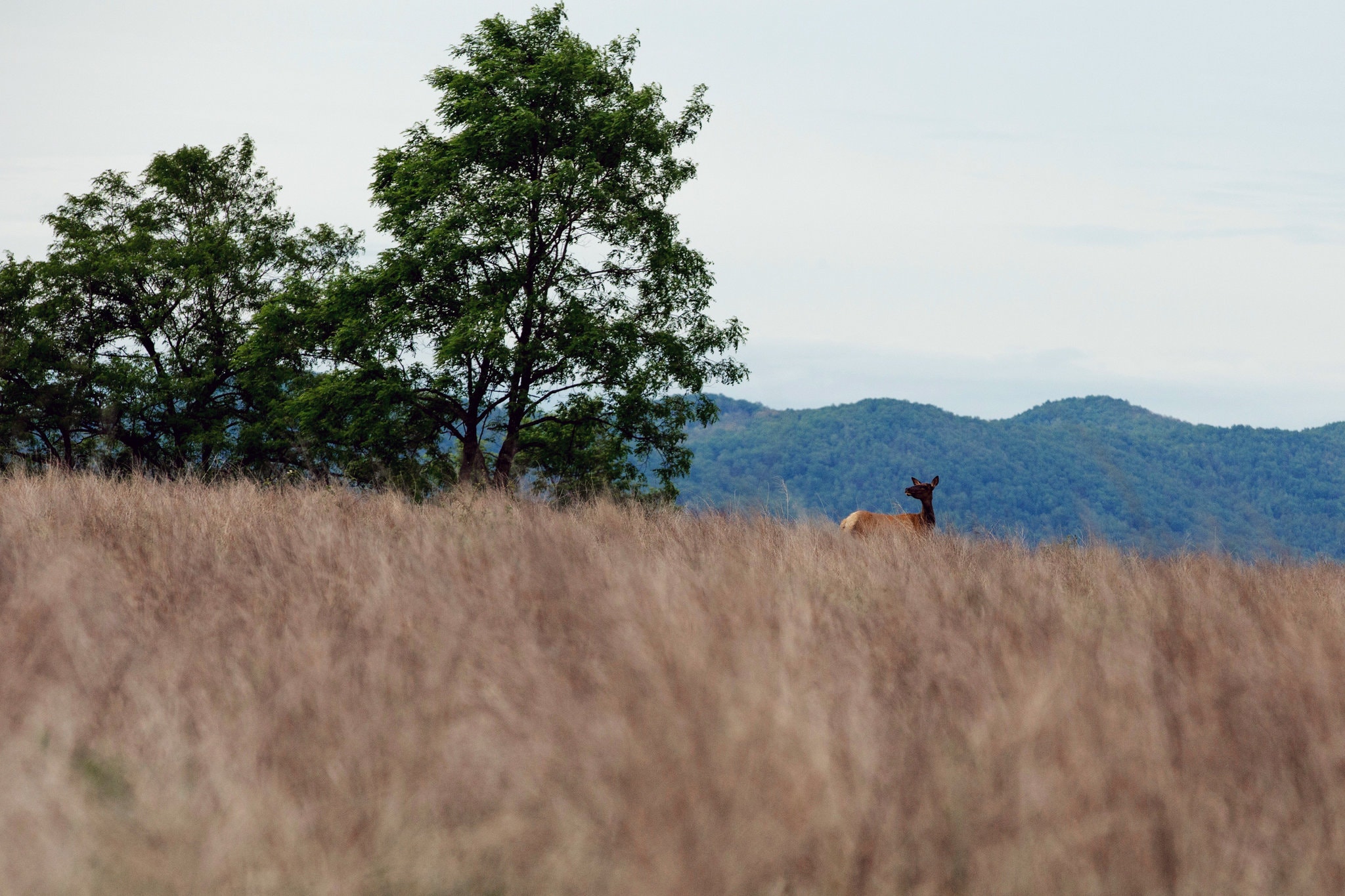 Elk were basically wiped out before a 150-year effort to restore them began. This animal has enriched every area to which it has returned.

NOTE: this article was originally published to NYTimes.com on June 30, 2020. It was written by Oliver Whang.

After a concerted reintroduction effort two decades ago, the state is now home to the largest population of elk east of the Mississippi. The animals’ home: reclaimed coal mines.

On a bright morning early this spring, David Ledford sat in his silver pickup at the end of a three-lane bridge spanning a deep gorge in southeast Kentucky.

The bridge, which forks off U.S. 119, was constructed in 1998 by former Gov. Paul E. Patton for $6 million. It was seen at the time as a route to many things: a highway, a strip mall, housing developments. Today, it spills out onto Mr. Ledford’s 12,000-acre property, which he and his business partner, Frank Allen, are developing into a nonprofit nature reserve called Boone’s Ridge. The road sloped up and disappeared around a hill, and Mr. Ledford took his right hand off the wheel for a moment to appreciate it. “It’s a hell of a driveway,” he said.

When Boone’s Ridge opens in 2022, it will offer a museum and opportunities for bird-watching and animal spotting. Two independent consultants have estimated that it could draw more than 1 million annual visitors and add over $150 million per year to the regional economy. This is in Bell County, in rural Appalachia, which has a poverty rate of 38 percent and an average household income of just under $25,000, making it one of the poorest counties in the United States.

The decline of the coal industry created a multibillion-dollar hole in the economy and left hundreds of thousands of acres of scarred land. But it has also created opportunities. Boone’s Ridge is being established on reclaimed mine land, and one of its biggest selling points is a big animal that has only recently returned to Kentucky: elk.

Gone, then back again

When Daniel Boone wandered through the Cumberland Gap and into Kentucky in the late 1700s, the state was filled with wildlife. In his written account of this journey, Boone recalled finding “everywhere abundance of wild beasts of all sorts, through this vast forest.” In the west, prairie animals roamed grasslands. In the east, steep valleys lined with hardwood forests allowed unique biomes to emerge, home to species found nowhere else: the Big Sandy crayfish, the Cumberland Plateau salamander, the Virginia big-eared bat.

But in less than a century, land development and hunting decimated or eliminated buffalo, turkey, whitetail deer, river otters, bald eagles, quail and other animals. Elk — their presence enshrined in place-names like Elk River and Elkhorn City — were among the first to go; the last one was killed before the Civil War. By the 1900s, few residents remembered there had once been elk in the state.

In 1944, the Kentucky Department of Fish and Wildlife Resources was established and charged with reintroducing animals of all kinds and regulating their numbers for hunting and conservation. Whitetail deer, which numbered fewer than 1,000 after the Depression, now number more than 1 million and generate $550 million in state revenue from hunting licenses, tourism and the sale of rifles and other hunting-related paraphernalia.

The department’s headquarters are on a large plot of land outside of Frankfort, the state capital. Out back is a kind of local zoo, housing dozens of native species — bald eagles, waterfowl, cottonmouth snakes, black bears, a bobcat shading itself under a rock overhang — that have all been successfully reintroduced, with stable populations.

“That is the whole reason we’re here today,” said Chris Garland, director of the agency’s wildlife division. “We started out with getting game, protecting the few remaining species we had left.”

With most of the region’s threatened game restored, attention turned to restoring other species, among them elk. In 1997, the Rocky Mountain Elk Foundation, an association of hunters, offered to fund a multimillion-dollar six-year plan to airlift more than 1,500 elk to Kentucky from the western United States.

Gabe Jenkins, a biologist with the Kentucky Department of Fish and Wildlife Resources, worked for more than a decade on the project. “All the stars had to align for us to pull off this project,” he said. “Nobody in that short amount of time had ever moved that many elk. We went big.”

The plan was popular; more than 90 percent of state residents supported it. There was only one problem: Each elk eats over 40 pounds of vegetation a day, and the grassland habitats of western Kentucky, where the animals were populous in pre-settlement times, had all been developed. Farm owners did not want half-ton animals destroying their crops, and there simply was not enough land to support large herds anymore.

But in the eastern half, where craggy mountains had previously prevented elk population growth, hunters and conservationists were presented with a remedy to this problem: abandoned coal mines.

On the shoulders of coal

Coal mining has been a fixture in the region since the early 1800s, when speculators first found seams of black gold throughout the ridges of eastern Kentucky. Demand increased, technology improved. In the 1960s, companies developed a devastatingly efficient technique called mountaintop removal, which scraped away entire tops of mountains to expose the wells of coal underneath.

Using this method, the rock — shale, limestone, sandstone — is blasted apart and towed away by massive draglines, producing vast amounts of rocky debris. Sometimes this extra material can be packed back down onto the mined land, forming an “approximate original contour” of the ridge. But often the steepness of a slope prevents this, so the debris is dumped into surrounding valleys and planted with shrubs, grass and trees, turning the jagged mountain terrain into a sloping plateau.

Unregulated, the environmental effects of mountaintop removal-mining can be devastating and lasting. A number of studies have found that communities near mountaintop removal sites have abnormally high rates cancer and serious illness. Some “valley fills” destroy headwater streams and surrounding forests, turning delicate mountain ecosystems into barren plains. But when reclaimed correctly, the landscape can offer opportunities for different kinds of land use, including cattle farming, housing developments and sites for tourism.

Active coal mines started receding from the region in the 1990s and 2000s, and the towns built around them faced an economic vacuum, with fewer jobs and deepening poverty. Many residents who could leave, did. But the reclaimed mines remained, transforming previously uninhabitable mountains into something of a topographical patchwork quilt: long, thin ridges of stone and hardwood trees interrupted by sloping grassy plateaus. Thousands of these sites dot the eastern counties of Kentucky. Underpopulated and undeveloped, they offer ideal habitat for elk.

“Elk are classified as an intermediate feeder,” said Will Bowling, an elk biologist with the Nature Conservancy. “They prefer a wide array of different food sources. They’ll graze, they’ll browse, they’ll eat acorns and stuff that are falling from trees.”

Reclaimed plateaus provide a diverse landscape: meadows surrounded by forests, which provide shelter and alternative grub. So long as humans don’t interfere, Mr. Jenkins said, “elk can survive just about anywhere. They’ve just got to have some grass.”

In 1997, a year before the bridge leading to Mr. Ledford’s land was constructed, 4,000 people gathered on the grassy slope of a reclaimed mine in Perry County as Governor Patton threw open the doors of a trailer and an elk stepped foot on Kentucky land for the first time in more than 150 years.

Since then, Kentucky elk have been closely monitored by researchers like Mr. Jenkins and Mr. Bowling. Absent any real predators, the animal’s population has exploded: The state is now home to 13,000 elk and counting, all clustered in the 16 counties of coal country.

The ecological impact of refilling that niche has not been fully charted, but it can only be positive, Mr. Bowling said. “Having the natural breadth and scope of your species is good,” he said. “Within the conservation community, most people just hold that as a fundamental truth.”

The economic impact is tangible. The state now issues a couple hundred tags for elk hunting each year, and a small market has developed — elk sightseeing tours, elk hunting guides — that adds about $5 million to local economies, according to the state fish and wildlife department.

The elk industry will not come close to replacing what was lost when coal left, but “coal business will not be back,” said Rodney Gardner, a naturalist at Jenny Wiley State Resort Park in Floyd County.

Mr. Gardner, 47, who grew up nearby, leads elk tours on the mine where his father once worked; it was reclaimed in 1986. One morning in March, as the sun peeked over the mountain, Mr. Gardner halted his bus beside a group of animals, each about five feet tall, with brown fur coats and bushy tails hugging their rumps. The seven passengers on board slid to the windows to get a better look, pulling out their phones and snapping pictures.

Half a century ago, this grassy plateau was an open coal mine. Half a century before that, it was a mountain peak; a sharp eye can still make out the hint of the valley that has since been filled. Shrubs and trees — pines, sycamores, trees of heaven — have sprung up, as well as a regional detention center and a small airport on the mountain.

Boone’s Ridge has a similar history, and is also filled with elk. As Mr. Ledford drove his pickup, he leaned forward, thinking he spotted a couple, then relaxed at the sight of what he called “elk rocks,” the big chunks of sandstone or limestone left over from when the land was being mined.

“Some of these rocks look like elk and they fool you, and it gets annoying when the same darn rock fools you 30 times,” he said.

Ten minutes later, he pointed out a herd of 20 elk loping through a dip in the plateau. The animals kicked their legs back sharply as they ran, their heads still, looking straight ahead. A bull paused where the grassland became mountain, his antlers thrown in sharp relief by the sun. He stood there, still and proud as the stone ridge behind him, then bolted off out of sight.