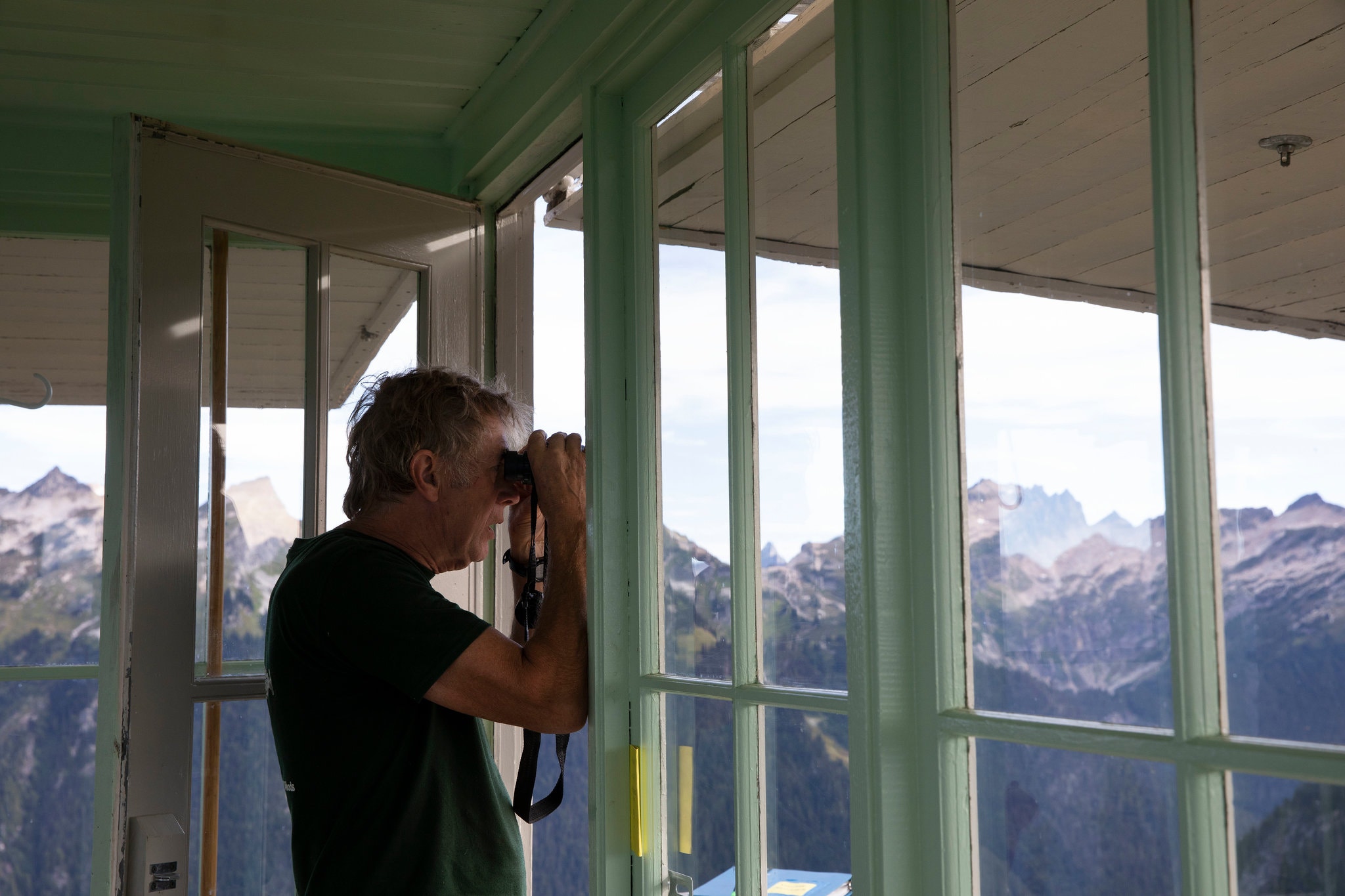 The last of a breed.

NOTE: this article was originally published to NYTimes.com on January 13, 2019. Photographs and Text by Ruth Fremson.

GLACIER PEAK WILDERNESS, Wash. — Smoke was rising over Bonanza Peak. So Russ Dalton, 72, stepped inside the lookout post perched high above the Glacier Peak Wilderness, spun the fire finder to point in the direction of the faint dark smoke he had spotted, and lined up the cross hairs on the exact spot.

Then he put down his binoculars and picked up his radio: “Puget Sound Dispatch. Miners Ridge lookout. I’m reporting active smoke.”

Mr. Dalton is a fire lookout, one of the remaining few whose job it is to scan the horizon for smoke and alert the authorities before a fire becomes deadly.

In their heyday there were more than 8,000 fire lookouts in 49 states across the United States. Many were built during the Great Depression by the Civilian Conservation Corps, one of President Franklin D. Roosevelt’s New Deal programs. Despite the solitude, many fire lookouts were drawn to the romance of spending summer on a mountain peak, sleeping under the stars between days scouting for fires. The writers Jack Kerouac, Gary Snyder and Edward Abbey were among them.

Now, human lookouts are becoming a remnant of the past. The Forest Service manages 153 lookout posts these days in Washington and Oregon, but only about 50 of them are staffed full- or part-time. 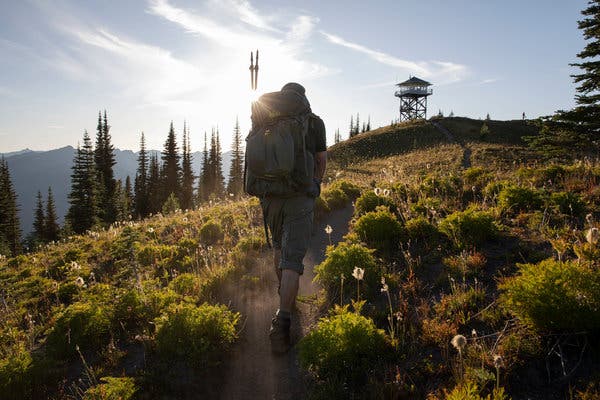 The use of aerial surveillance in the 1960s accelerated their demise. A variety of modern fire detection methods, including infrared devices, live streaming cameras, satellite imagery and drones, have sped up the retirement of most lookouts.

Though they are not yet quite as extinct as lighthouse keepers or elevator operators, a great many have disappeared. Mike Liu, a retired District Ranger for the Methow Valley district, said that cost played a role.

“Putting a person in a tower, paying them minimum wage, is not the big dollar figure,” Mr. Liu said. “It’s mostly the upkeep of the towers that breaks the piggy bank.”

Though a single surveillance aircraft with a spotter can cover as much territory as 20 lookouts could on the ground, he said, there are still areas in the rugged back country where only a human can relay information in emergency situations. But if tight budgets force the Forest Service to choose between having a lookout or a fire crew member, the crew member wins, he said, because “life and property are paramount to protect.”

Still, Mr. Liu concedes, “most every ranger I have spoken to, given the opportunity, would staff a lookout.”

Mr. Dalton is in his fourth year manning the lookout at Miners Ridge, elevation 6,210 feet, where he spends two months each summer. Some lookouts are paid employees, but most, including Mr. Dalton, are unpaid volunteers. And he isn’t ready to let go.

“I wake every morning and look over my toes at Glacier Peak,” he said. Besides Glacier Peak, an active volcano in the Cascade Range and the fourth tallest mountain in Washington state, Mr. Dalton looks out at peaks with names like Buck, Agnes and Flower Dome ringing the lookout. The ground around the tower is blanketed with heather, anemones, purple asters and huckleberry bushes.

The basic living conditions, with no running water, don’t faze him.

Much of Mr. Dalton’s work is dedicated to maintaining the post. A retired Park Service employee with 40 years of experience building trails, restoring historic structures, and working as an interpreter for both the National Park Service and the Forest Service, he seems particularly suited to the role of modern lookout. Over the past four summers, he has painted, hammered, wired, and cleaned, banging the 169-square-foot cabin back to its former shape. “This is a plum,” he said. “The price of admission was to restore the place.”

Almost every day, after posting signs about restoration areas and hunting seasons or checking nearby campsites to make sure hikers are adhering to the rules, Mr. Dalton carries a 40-pound pack with jugs of water from the nearest source, Image Lake, about a mile back to the lookout. As he hikes, he snacks on huckleberries that he picks along the way without breaking stride.

Social media posts by hikers and campers about Mr. Dalton and his lookout have dramatically changed his role. He gets far more visitors now —as many as 20 a day who want to sample the views or just say hello. “One post and, bang, 50 people read it and say, wow, ” Mr. Dalton said. He added that he often spends more time giving tours than he does looking for fires.

Doug and Paula Jones, retired teachers, arrived one morning at Miners Ridge, eager to see the views that Ms. Jones’s father remembered from a visit in 1959. Mr. Dalton showed the couple around the lookout, explaining the old telephone system and the fire finder, a type of alidade used by fire lookouts. Ms. Jones peered through the fire finder.

“It was very sweet to go back in time and realize that he hiked here,” she said of her father.

These days there are more eyes on the forest than ever before. Visitors to the Glacier Peak Wilderness alone have doubled since 1997. Hikers are carrying cellphones and using back-country apps, GPS devices and rescue beacons. There are webcams, satellites in space and planes in the air. For now, though, there is still a role, however modified by technology, for the human fire lookout.

Ray Kresek, a retired firefighter and a historian of fire lookouts, said they have an advantage over anything yet invented: they live in the tower.

“The ideal would be a combination of electronics, daily air patrols, and a lookout,” Mr. Kresek said. “But if you removed all but one of those, I would say the lookouts are the most reliable.”

A version of this article appears in print on Sept. 28, 2019, Section A, Page 13 of the New York edition with the headline: High in the Cascades, Still on the Lookout for Smoke.
Share on Facebook Share on Twitter Share on LinkedIn
Previous Next