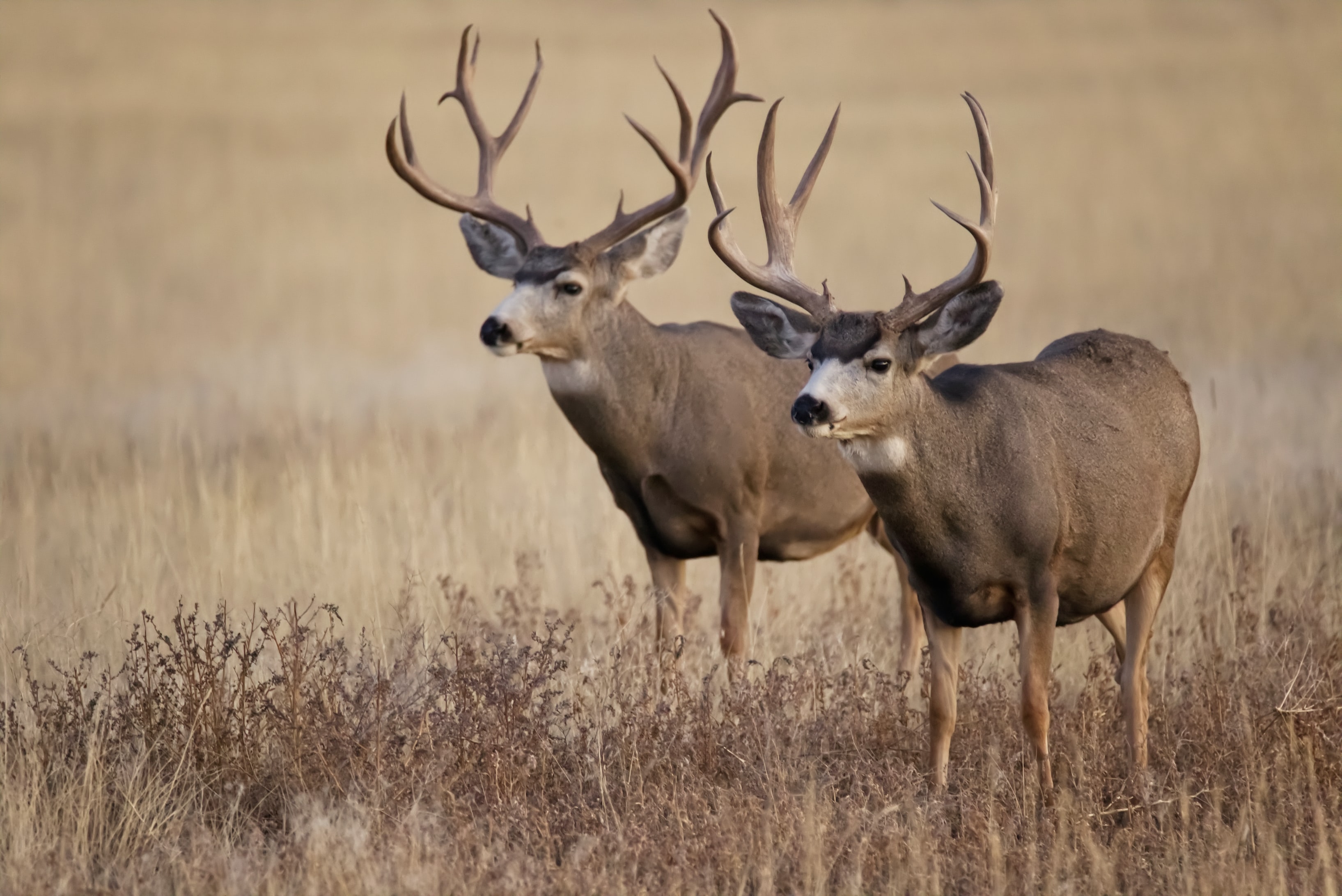 As reported below, 98% of the animals in one of Wyoming’s deer herds have Chronic Wasting Disease (CWD). Infection rates like these will soon make Wyoming, Montana and Idaho the national leaders of the epidemic.

Obvious ways to control CWD include stopping practices such as winter feeding that everyone agrees spread the disease among elk and deer, increasing predator populations, especially wolves, to cull sick animals thereby helping curb the disease’s spread, and treating the brucellosis and CWD that is widespread in the Yellowstone bison, deer and elk herds.

Current practices do the opposite and are disasters for deer, habitat and people. In order to address this wildlife health crisis effectively, environmental objectives, people and livelihoods must be given equal consideration in all decisions.

NOTE: this article was originally published to JHNewsandGuide.com on January 11, 2022. It was written by Mike Koshmrl.

It has become a foregone conclusion for Riverton outfitter Ken Metzler that when one of his mule deer hunters shoots a buck, the animal is afflicted with chronic wasting disease, he said.

“We had 98% last year and this year,” Metzler said of the positivity rate. “And we had every one of them tested but a couple.”

Generally, the lethal disease’s sky-high prevalence isn’t a deterrent for the out-of-state hunters eager to target a muley on the Fremont County ranchland where Wyoming Trophy Hunts leads its clients, he said. Applications to hunt with Metzler’s guides are still pouring in, especially since the pandemic began, even though the likelihood of taking home a trophy-class deer has declined. As the population has fallen, hunting licenses have also been cut.

“I’ve dropped from 100 hunters to probably, oh, 20,” said Metzler. Of the clients who do get out to hunt, Metzler said, “we’re not killing big bucks.” Meat from younger, fatter bucks typically goes in the freezer, even though public health experts caution against consuming CWD-positive animals. But when the hunters walk up to a downed animal and find a sickly looking, “flat-ass skinny” deer, Metzler calls up the warden and gets the OK to pitch the remains, he said.

Given the condition deer are in, Metzler would support a larger reduction in licenses if it would help the herd bounce back.

The Wyoming Game and Fish Department and U.S. Geological Survey researchers share concern and curiosity over what to make of the mule deer herd that Metzler’s business depends on. The Project Herd — as Game and Fish knows it — is easily Wyoming’s big game herd most ravaged by the degenerative prion disease. In fact, the data show the herd is also among the most CWD-infected wild cervid populations known to exist in North America.

“We have a proposal for a study for this herd because of the extraordinarily high rates of CWD,” Game and Fish Dubois Wildlife Biologist Zach Gregory said.

Plans are still in the rough, initial phases, Gregory told WyoFile, but researchers intend to find funding for 40 GPS collars that will be fitted to a random sample of deer in the Project Herd as soon as next winter. Some — likely a good portion — will be CWD-positive animals and therefore destined for death, but they’ll be tested while they’re alive using rectal biopsies and then let loose.

The hope is to glean some clarity about the factors contributing to the alarming disease prevalence.

“Are these positive deer in different places than these negative deer?” Gregory asked. “That’s going to potentially help us identify the hot spots.”

Only time will tell whether those collared, sickened deer point Gregory and his USGS counterparts toward locations like the ranches where Wyoming Trophy Hunts guides — and, according to Metzler, where virtually all buck mule deer are CWD-positive.

What’s already understood is that the Project Herd is an anomaly in the region and is itself a hot spot. The herd roams Wyoming’s deer hunt units 171 and 157, in west-central Wyoming, which are both within the borders of the Wind River Indian Reservation, although non-native hunting is confined to non-tribal lands within.

The herd is considered a priority for CWD surveillance, and between 2016 and 2020 Game and Fish staff gathered tissue samples from 139 of its bucks. Of those, 85 came up positive, for a prevalence rate of 61%.

“It’s the highest that’s been recorded, maybe anywhere in the world in wildlife,” Lutz told attendees at a public meeting last month.

The Wildlife Health Laboratory supervisor for the state of Wyoming, Hank Edwards, wouldn’t go that far, instead emphasizing the multi-year positivity rate. There are agricultural parts in southwest Saskatchewan, he noted, where prevalence has been documented in the 60-70% range. Annual reports from the provincial government confirm it, and say that in over a dozen Saskatchewan wildlife management zones, more than 50% of mule deer bucks are testing positive for the degenerative disease.

Edwards labeled CWD’s prevalence in the Project Herd “alarmingly high,” and he pointed out that it’s Wyoming’s most CWD-infected deer herd by a nearly 20% margin. Statewide, 12.5% of the nearly 6,500 CWD samples processed during 2020 tested positive, statistics that span species, sex and cause of death, according to Game and Fish’s most recent CWD surveillance report.

“Every herd responds differently,” Edwards said, “for a number of reasons.”

In the Sublette Herd, which roams the Green and Snake river basins, CWD is just now arriving, and 0.8% of 375 samples tested to date have hit for the prion disease. There’s also significant variation in herds that for decades have suffered from CWD’s inexorable effects, like listlessness, physical wasting and inevitable death. In southeastern Wyoming’s Laramie Mountains, one of the first places where CWD was found in wild deer, 22% of hunter-killed bucks have been positive in the last five years. But in the Black Hills, the long-term prevalence in mule deer bucks is just 5.9%, though Edwards said that rate may have been dragged down by other diseases, like epizootic hemorrhagic disease (often called blue tongue).

Ahead of the study, wildlife managers hesitate to hazard a guess for why the Project Herd’s disease rates are a whole order of magnitude greater.

One reason is that the Project Herd today is poorly understood. It’s a rare mule deer herd and the population isn’t monitored, although Gregory and others are trying to change that. There are several explanations for why the Project Herd is shrouded in so much unknown. It’s a smaller, low-density herd, Gregory said, that generally occupies riparian areas, private agricultural ground and the reservation, where it’s difficult, or impossible, for agency staff to regularly count deer.

Rather than counting deer, Game and Fish has used two metrics to monitor the herd: hunter satisfaction and landowner surveys to gauge perception of the population. Satisfaction has fallen off, and landowners are also noticing downward changes.

As recently as 2018 and ’19, no one surveyed thought the mule deer population was too low. But in the last two years, nearly half of respondents felt there were too few deer.

To help the herd hold up, Game and Fish slashed doe-fawn hunting licenses by half ahead of the 2020 hunting season, though that’s still not enough in the eyes of an outfitter like Metzler.

Mike Miller, a longtime CWD researcher and wildlife veterinarian for the Colorado Division of Wildlife, was not surprised outfitters like Metzler are observing so few older bucks in an area where prevalence is so high. He has seen it before, while studying Colorado’s Table Mesa Herd, where prevalence in bucks was approaching 50%.

The captures he referred to outside of Boulder, Colorado, occurred 14 years ago. But he returned to capture mule deer more recently and it was the same outcome: “I don’t think we caught any bucks that were aged over 5 or 6 years,” Miller said. “They’re just not there.”

Chronic wasting disease is killing them before they can reach those middle ages, he said, and that’s even true in Boulder County, where hunting is prohibited.

Miller declined to theorize what’s going on with the Project Herd directly. But he said common themes tend to emerge among deer herds in the few cases where CWD prevalence rates have been so off the charts. The herds are usually non-migratory, and consistently gather at concentrated food sources. Clay-type soils that effectively bond with the transmissible prions and even enhance infectivity can also be contributing factors, he said.

“I’m not implying that these deer are captive, but where you do see these really, really high infection rates commonly, is in deer and elk that are in captivity,” Miller said. “They’re living in a very small area and feeding and watering in the same places, day in and day out.”

When those kinds of conditions exist without a fence, he said, there can be the same effect. There are management methods to encourage these types of deer herds to move around more to reduce transmission, but easy solutions are unlikely, he said.

“It’s hard when infection rates get this high,” Miller said. “You’ve probably got a lot of contamination in the environment, and in the wild that’s just really hard to do anything about.”

Still, Edwards hopes that the coming GPS data on the Project Herd mule deer points his agency toward next steps that could create a healthier population. Once the sources of CWD’s spread are identified, be it a silage pile or some other hypothetical factor, he said, then more concrete steps could follow.

“It all depends on what’s going on,” Edwards said. “You have to know the sources to try to change the transmission factors. Maybe at the end of this research, it’s not such a gray picture.”