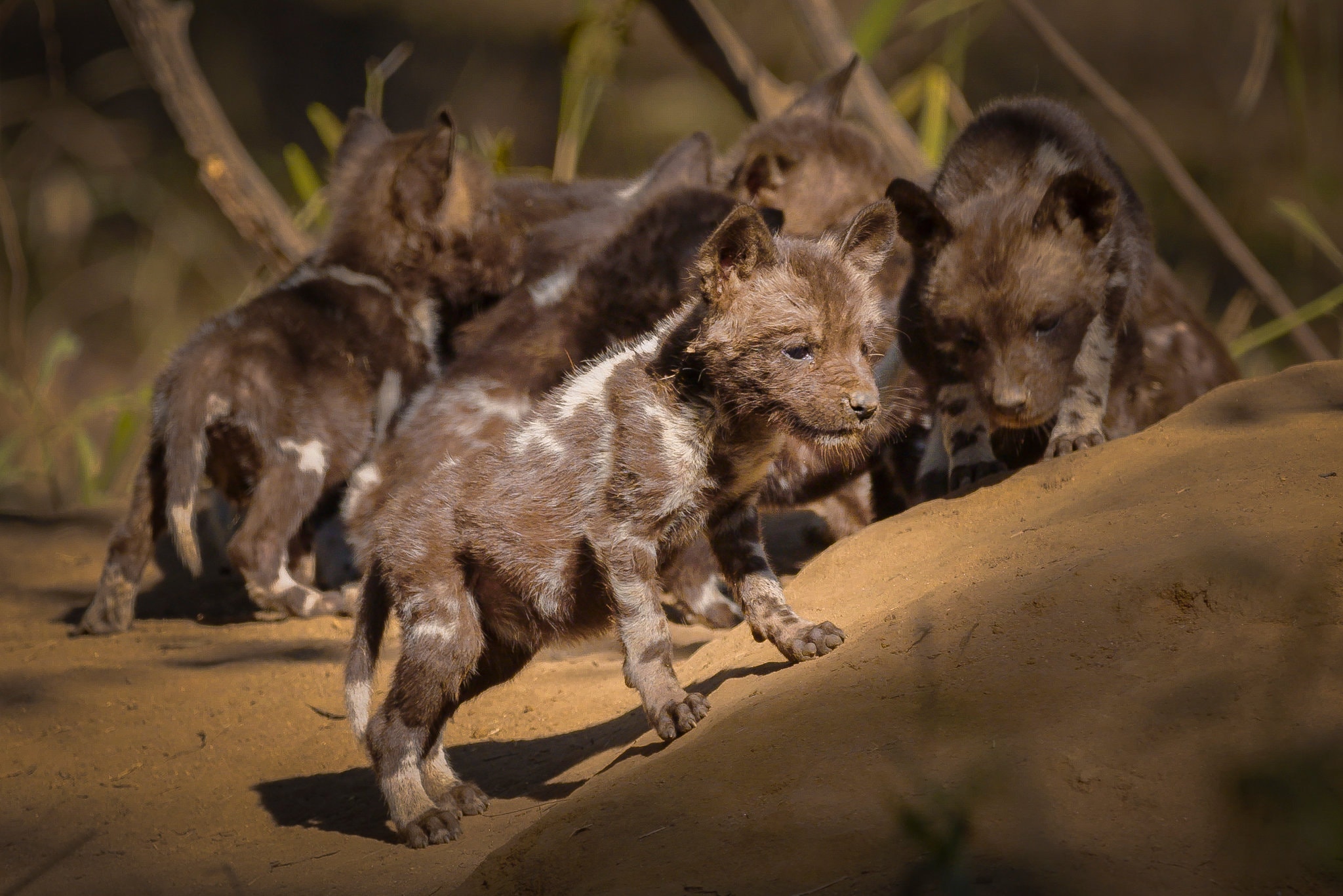 This is part of a remarkable success story from Mozambique’s Gorongosa National Park. The success there shows how fast systems can recover when keystone grazers, numerous prey species and the full compliment of predators are restored.

For more on this topic watch this lecture of Dr. Sean B. Carroll, author of the Serengeti Rules: He discusses Mozambique’s Gorongosa National Park at minute #46 of the video.

NOTE: this article was originally published to NY Times on August 3, 2019. It was written by Natalie Angier.

Wild dogs have returned to the famed Gorongosa National Park in Mozambique. The first puppy litters were not far behind.

Last summer, not long after releasing a pioneer pack of 14 African wild dogs into Mozambique’s Gorongosa National Park as part of an ambitious wildlife restoration effort, Paola Bouley went to see for herself what in the name of Canis major could have happened to the wild dog pups.

As Gorongosa’s carnivore expert, Ms. Bouley knew that Beira, the alpha female of the pack, had been pregnant when the dogs were set free. She knew that the closely bonded and highly endangered apex predators had dug a maternity den for their queen, and that Beira had spent a lot of time down there — until one day, she didn’t. She and the pack had moved on.

But where were the pups?

As Ms. Bouley was crouching by the abandoned den and peering into the hole, she met the likely answer. A giant African rock python — the continent’s largest species of snake — dropped from a nearby tree, stared her in the face and then slithered off.

“I think it was disappointed that I wasn’t a warthog,” Ms. Bouley said.

For a snake that can grow to 20 feet and swallow an impala whole, even a large litter of Lycaon pictus pups would barely rate as an amuse-bouche.

Yet the wild dogs were unbowed, and this year, after migrating to a less serpent-y sector of Gorongosa’s one million acres, they made up for lost time in spectacular fashion. Beira give birth in late April to 11 pups, who emerged from their den in early June and appear on camera trap footage to be thriving, as well as inexcusably cute (although the runt of the litter eventually died).

Of greater surprise to Ms. Bouley and her colleagues, Nhamagaia, the beta female of the pack, defied the L. pictus convention that only the resident alpha female gets to breed, and in late June delivered her own litter of eight. 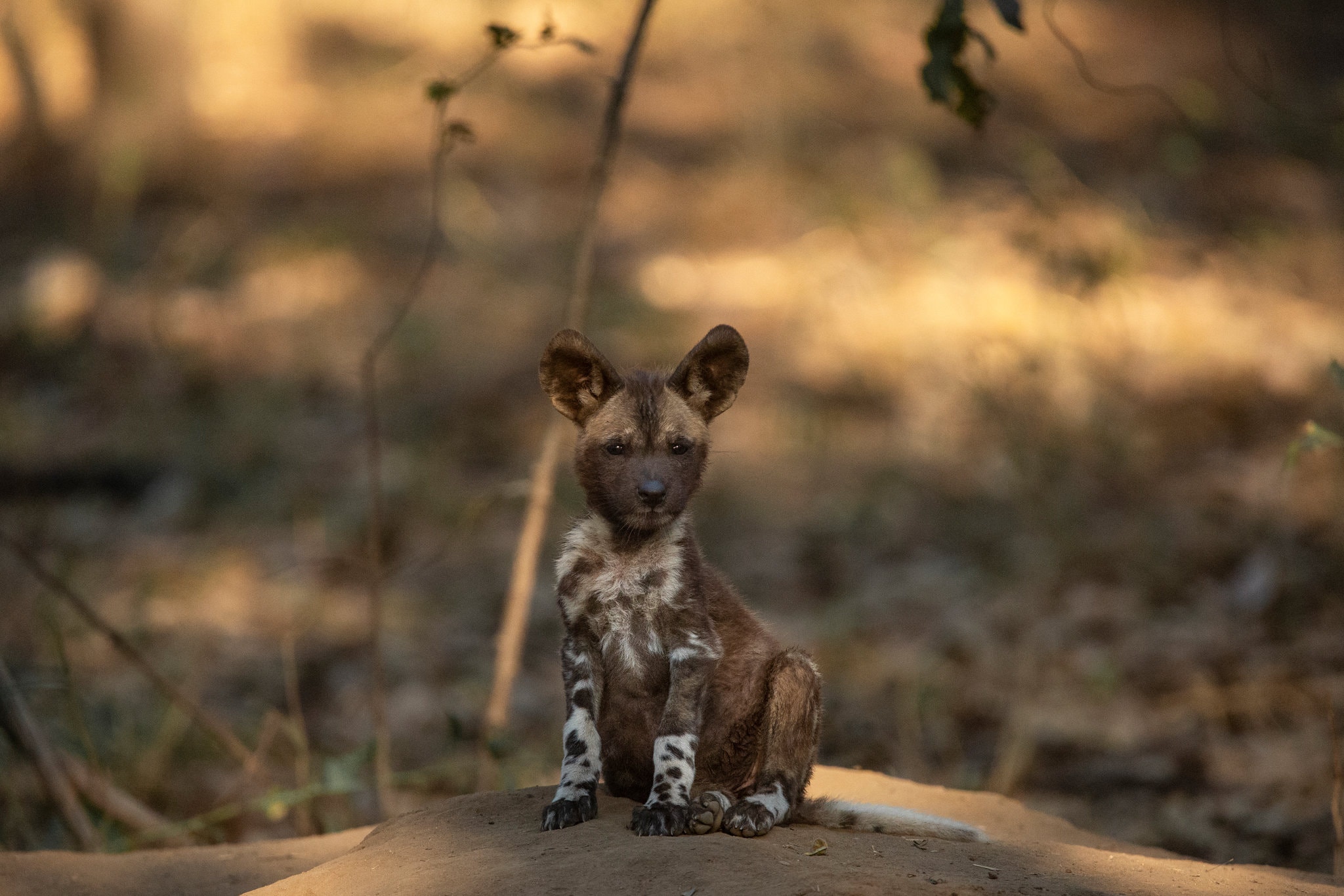 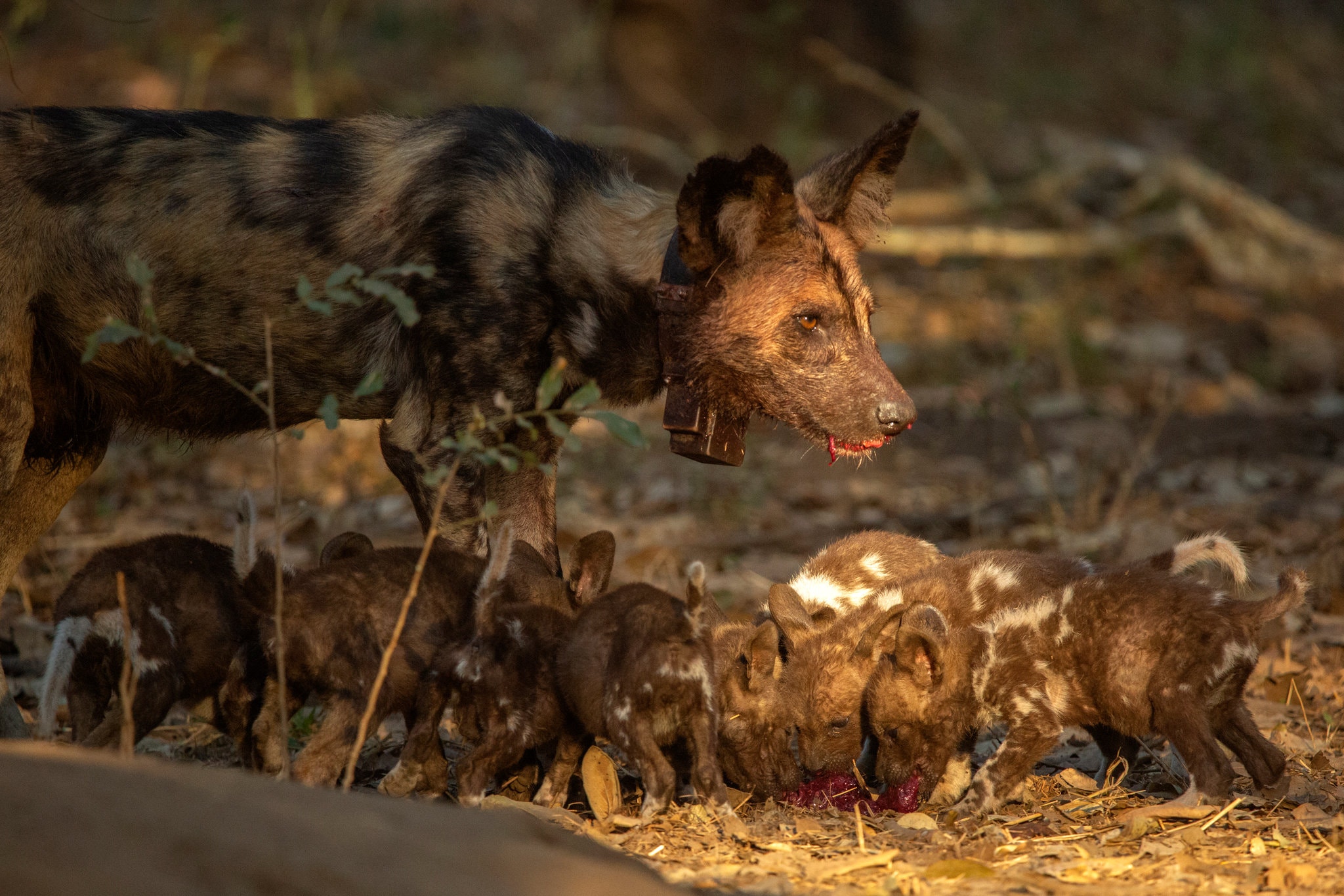 The researchers initially feared that Beira and the other adult dogs might reject the off-label young, leaving them to die of neglect. But no: The new pups have been swept up into the sens-a-round frenzy of carnivore kumbaya — life as an ardently, obligately social mammal for whom, as wild dog expert Scott Creel of Montana State University put it, “the worst thing that can happen is to be alone.”

Gorongosa’s pup eruption didn’t end there. Not far from the Beira-Nhamagaia crèche, a group of four adult dogs that had split off from the original pack in the spring — three males and one female — appeared to be successfully rearing yet another litter of eight pups.

“It’s incredibly exciting,” said Cole du Plessis, coordinator of the wild dog range expansion program at the Endangered Wildlife Trust. “At the beginning of last year there were no wild dogs in Gorongosa, and now we’re closing in on 50.”

And why not? “When I flew over Gorongosa,” Mr. du Plessis said, “looking at the prey numbers, the water, the topography — I thought, if you could sketch what wild dog heaven would look like, Gorongosa is it.”

The successful reintroduction into Gorongosa of African wild dogs underscores the park’s position as one of the bright spots on an otherwise grim landscape of shrinking forests and accelerating loss of large, charismatic animals unlucky enough to not be our pets or livestock.

During Mozambique’s civil war, which ended in the mid-1990s, Gorongosa’s abundant wildlife was almost completely destroyed. Since then, the park has been steadily recovering, aided by an unusual partnership between the Mozambique government and the wealthy American philanthropist Gregory Carr, along with input from local communities, international teams of scientists, conservationists, human rights advocates — really, anybody Mr. Carr can get on the phone.

Researchers see in Gorongosa the chance to track the recovery of a complex ecosystem from the ground up, and to see what will heal on its own and what requires intervention.

Getting the right mix of grazers and meat-eaters has proved a particular challenge.

Herbivores were the first to bounce back in post-conflict Gorongosa, and today the park pulses with more than 100,000 of them: blue wildebeest, buffalo, impala, hippo, waterbuck, reedbuck, elephant, eland, nyala, oribi, the hauntingly beautiful sable, the disturbingly furry bushpig.

Experts thought that, with so much meat on the hoof, carnivores of all stripes would surely immigrate from surrounding areas of their own accord, but predator rebound has proved spotty — or not spotty enough.

The lions in the park have fared well, and from the handful that remained after the war, the number today is 146 and rising. “We’ve got cubs everywhere,” Ms. Bouley said. “It’s hard keeping up with them.”

Not so for the other major predators. Spotted hyenas, which are common in many parts of sub-Saharan Africa and once were a Gorongosa staple, have yet to return, and the park team hopes to reintroduce a clan or two in the next few years. So, too, the leopards: Camera traps have picked up a lone leopard, probably a male, skulking around at night, but for all the park’s abundance of a leopard’s favorite dish, baboon, that loner has remained a party of one.

“We’re pushing to translocate some females from outlying areas into the core of the park,” Ms. Bouley said. “That should draw in other males and jump-start the leopard population.”

In the meantime, the wild dogs are having their day, hunting ferociously and cooperatively every morning and afternoon and sometimes in between.

Wild dogs, which are also known as painted wolves, are not like other dogs. According to a recent genomic analysis, they split off from the rest of the canid lineage some 1.7 million ago. They twitter and sneeze rather than bark or howl, and their ears are like satellite dishes to track prey and one another’s high-pitched calls. Their legs are like the sticks of a shadow puppet, and they have four toes rather than five, an adaptation that helps them run at up to 45 miles per hour.

In Gorongosa, the dogs target bushbuck, impala and waterbuck, surrounding the prey, grabbing at legs, nose and hindquarters, disemboweling it from below. Whatever they do, they do as a team. A lion may stray from its pride for hours or even days at a time, but wild dogs are never out of sight, smell and sound of their pack mates.

Dr. Creel, who has studied dog packs in Zambia and Tanzania, said, “If you don’t see an individual for an hour, you know the dog has either died or dispersed” — gone off to join a new pack.

Group life has its privileges, including being cared for when sick or injured. Last year Nhamagaia, the beta female, broke a front leg. “You could see it dangling,” Ms. Bouley said. “We thought we were going to lose her.”

But though the dog straggled behind, the pack would wait patiently for her and make sure she could feed at a kill, and the leg eventually healed.

The dogs are cooperative hunters and cooperative breeders, a fairly rare reproductive strategy among mammals. In this system, the alpha pair of the pack do most of the breeding, while the other adults serve as childless helpers at the nest. They regurgitate meat from a kill to feed the lactating alpha female, and they regurgitate still more to fuel her weaned but dependent, ever-begging pups.

The alpha dogs defend their status through minor acts of aggression, nips and charges, particularly during mating season, but the subordinates don’t seem to mind. Dr. Creel and his colleagues found that underdogs have lower levels of stress hormones, compared to the dominant pair.

Subordinate females generally don’t bother to ovulate, and their balance of sex hormones resembles that of women on birth control pills. It’s a tough enough job to keep the alpha female’s litter alive, especially in brutally competitive settings where the dogs are surrounded by lions and hyenas eager to steal their prey and kill their young, and where the ranges of other dog packs encroach on theirs.

Moreover, because subordinate pack members often are related to the dominant dogs, helping the pups keeps some fraction of their genetic legacy alive.

Nevertheless, subordinates may seek higher status and personal parenthood in a number of ways: by dispersing to a neighboring pack if available, forming a new pack, or getting pregnant at home and hoping for the best.

Ms. Bouley suspects that Gorongosa’s lavish conditions, of abundant prey and light competition, explain the success of Nhamagaia’s insubordinate act. The alpha female not only didn’t shun the beta’s young — with her own pups mostly weaned, Beira pitched in as wet nurse to the new brood. The older pups treat their juniors like toys, one taking the head, the other the tail, in a tug of war.

“The bonding between the new pups and the whole pack, especially Beira, it’s not what we were expecting at all,” Ms. Bouley said.

Beira may be grateful for the extra dogpower come September, when another pack of 22 dogs will be relocated to Gorongosa from the Kalahari, and turf battles are sure to begin. 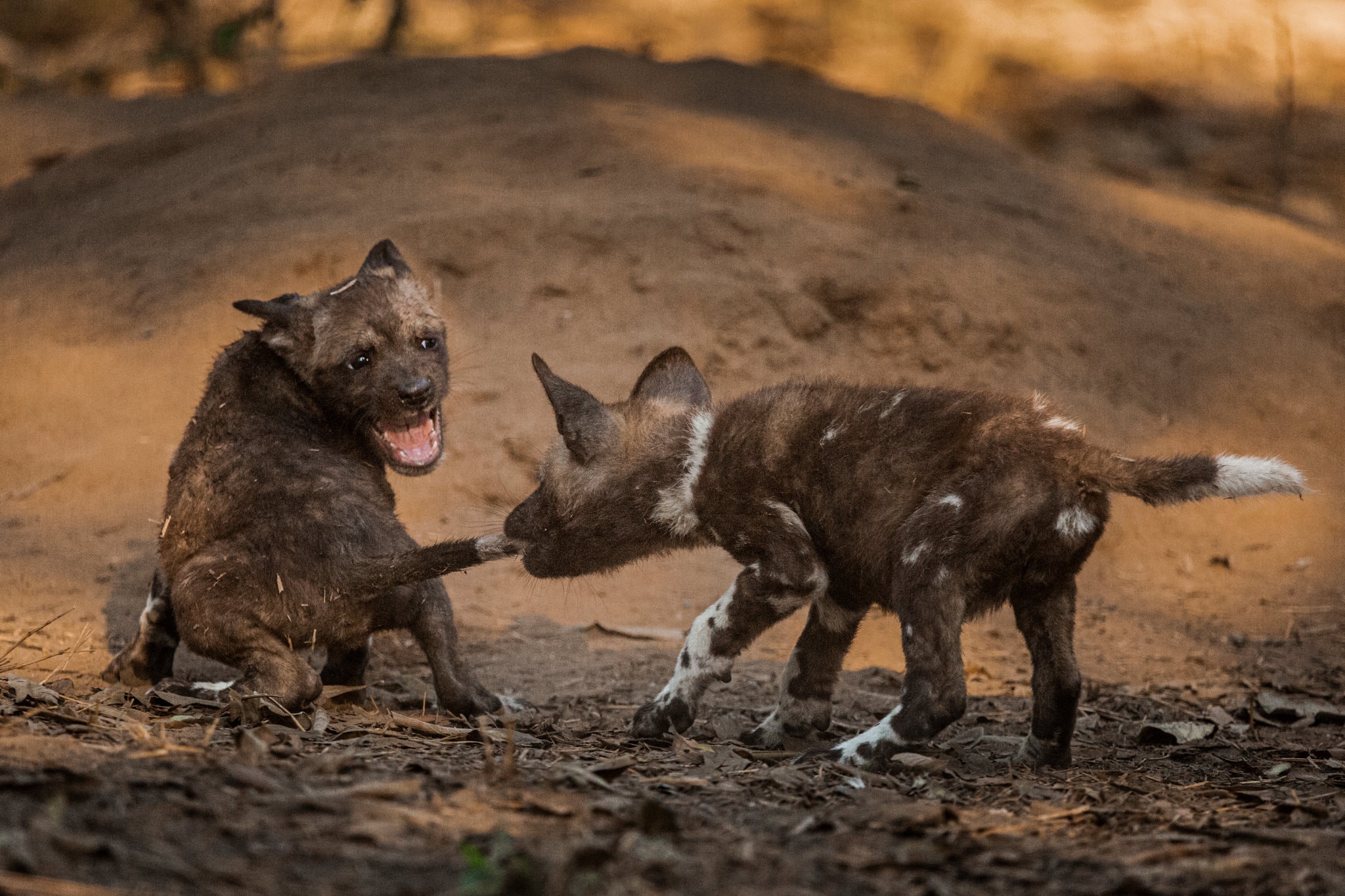