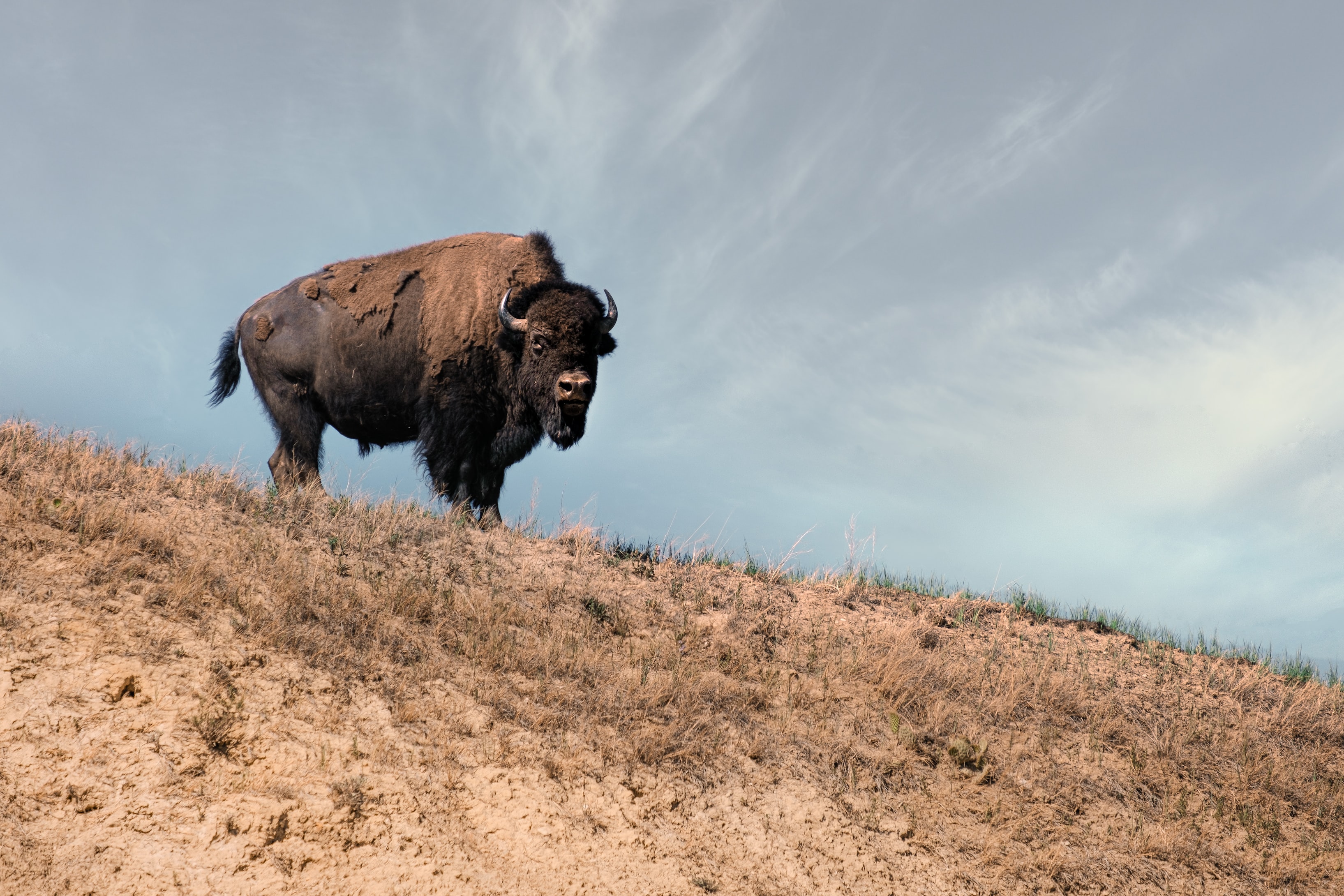 “As discussed in the article below, when bison were allowed to graze through patches of tallgrass prairie, they boosted native plant species richness by a whopping 86 percent.

Cattle and other domestics animals –  when they are grazed in ways planned to mimic native bison herds – do the same thing.

NOTE: this article was originally published to NationalGeographic.com on August 29, 2022. It was written by Jason Bittell.

A study 29 years in the making shows how bison reintroductions can create richer ecosystems and resilience against climate change in North America.

Twice a year for the last 29 years, scientists have waded through the same sections of tallgrass prairie in eastern Kansas and tallied up as many plant species as they could find. The goal was to determine the impact of American bison and cattle on the ecosystem, compared with plots of similar prairie protected from these grazers.

It’s hot, tedious, and tick-infested work, but it is incredibly important: Tallgrass prairies used to cover a huge portion of Texas and stretch all the way up to southern Canada. Today this habitat, dominated by head- and waist-high grasses and forbs, herbaceous flowering plants, is imperiled. Tallgrass prairie is now present in just four percent of its former North American range.

Now, decades of diligence and data show a perhaps surprising result: When bison were allowed to graze through patches of tallgrass prairie, they boosted native plant species richness by a whopping 86 percent over the past three decades, according to a study published August 29 in the journal Proceedings of the National Academy of Sciences.

“We’re still kind of surprised at just how large of an effect bison had,” says study leader Zak Ratajczak, an ecologist at Kansas State University. “I don’t think anyone would have predicted this ahead of time.”

The scientists checked their results against 252 similar studies worldwide that looked at the impact of large herbivores on plant diversity. Among these studies, the American bison and their effects ranked in the 95th percentile, meaning that the new study’s findings are some of the most dramatic on record.

Between 30 million and 60 million bison lived in the United States in the mid-1800s, before the U.S. government largely exterminated the population, reducing their numbers to just a few hundred by 1889, part of a coordinated effort to deny a key food source to Native American populations. The new study’s findings suggest that ongoing efforts to reintroduce bison into their former range could have enormous benefits not only to Native peoples and their culture, but also to the land and natural environment.

“That is a reciprocal relationship that really was severed,” says Jason Baldes, tribal buffalo program manager for the National Wildlife Federation’s Tribal Partnerships Program, who was not involved in the new study.

“As Native people, as we restore this connection to the buffalo, it heals us. And that buffalo, by its presence on the land, heals the land,” says Baldes, who is also an ecologist and a member of the Eastern Shoshone Tribe. “And that is something that we can all learn, understand, and benefit from.” (Read about how Native peoples are working to bring bison back to their ancestral lands.)

How do bison affect tallgrass prairies?

For the prairie grass study, scientists surveyed sections of the Konza Prairie Biological Station, an 8,600-acre tallgrass prairie reserve co-owned by Kansas State University and the Nature Conservancy. In some areas, which are as large as 2,000 acres, free-ranging bison were allowed to graze year-round and other sections housed cattle during the growing season, between April and November. To test the impact of the grazers, a third group of plots were kept clear of both species.

In the herbivore-free plots, much of the landscape was covered by just four species of native grasses: big bluestem, Indian grass, switchgrass, and little bluestem. However, when bison and cattle were allowed to mow these species down, other, less dominant plants were able to thrive. (Read about a tallgrass prairie preserve in Oklahoma.)

Researchers at the Dunn Ranch Prairie in Missouri put Crittercams on bison to see how they interact with the ecosystem.

One particular beneficiary was a tall, flowering forb known as rigid goldenrod. The botanists saw this species only rarely in the ungrazed plots, but it popped up regularly in those frequented by bison. Similarly, several species of dry-adapted grasses also took hold in the bison plots, along with 11 annual species that had never been seen before in those plots.

Though Ratajczak can’t say for sure yet why bison create better opportunities for native species than cattle do, he has some theories.

“Bison also go around forming disturbances in the soil, called wallows,” says Ratajczak. “These are areas where they roll around and shake off their winter fur, and that creates this little hot spot of very different types of soil characteristics you wouldn’t find otherwise.”

Wallows harden and collect water after rain, for instance, creating miniature wetlands, which allow still more and different types of plants to grow.

Interestingly, by promoting different types of plant growth, the scientists believe bison could help their ecosystems become more resilient to prolonged droughts, one of the most significant effects of climate change in the American West.

For instance, annual plant species, which were abundant in the grazed plots, reproduce early before they flower, seed, and finally go dormant during the hottest and driest months, reappearing when climate conditions improve.

“We have to reassess what progress has looked like”

For his part, Baldes was impressed with the scope of the new study and says its findings reiterate “what we already know about the importance of this animal as a keystone species.”

Bison boost butterflies, salamanders, and reptiles by creating habitat both for the animals themselves and the plants they require for survival, says Baldes. When the large herbivores shed their thick winter coats, that hair becomes useful for nesting birds. “I’ve witnessed osprey flying over me at the buffalo enclosure, and it looks like they’re carrying a snake, but they’re carrying a big piece of buffalo hair back to their nest.” (See more photos of bison, the U.S. national mammal.)

Baldes is working to bring bison back to lands they once inhabited, such as Wyoming’s Wind River Indian Reservation, which is home to almost a hundred reintroduced bison. It’s an idea that’s gaining momentum in the U.S. and Canada, bolstered by studies such as this one, he says. A recent study also suggested that bison reintroductions would help Native American populations achieve better food sovereignty and economic sustainability.

By rejecting environmental exploitation, reintroducing important species like buffalo, and working to preserve Native languages, Baldes says, “we can make sure that our young people can be proud of being Shoshone and Arapaho, Blackfeet, Crow, Cheyenne, or any of the 574 federally recognized tribes in this country that are trying to tell their story.”

“We’ve had a level of colonization that’s happened, not only to Native people, but also to how land gets utilized,” says Baldes. “It’s been plowed up, paved over, fenced in, fenced out, all with this idea of progress.”

If bison reintroductions are going to succeed, Baldes says the health of the environment should take priority.

“That colonial system of thinking destroyed predators and removed the buffalo,” he says. “And so we have to reassess what progress has looked like.”