NOTE: this post initially appeared on WSJ.com on September 22, 2017 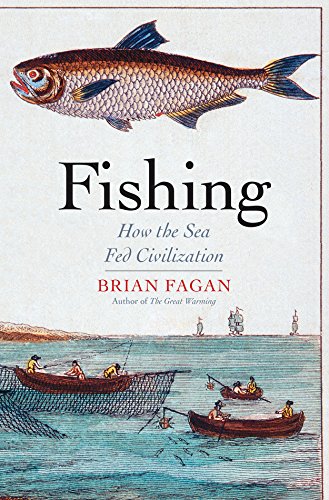 Many denied that there was anything wrong, insisting that what appeared to be problematic was just part of a natural fluctuation, independent of any human agency. If regulations were imposed, they were trumped by rising demand and the powerful interests who profited thereby.

Any resemblance between the debate over recent centuries about our dwindling fisheries and the matter of global warming today is not so coincidental in Brian Fagan’s “Fishing: How the Sea Fed Civilization.” In fact, the climate, its fluctuations over the millennia and concomitant changes in sea level, have played an underappreciated role, Mr. Fagan says, in the blossoming of fisheries in certain places and times, their extinction in others.

But over the ages nothing has been so constant in these extinctions as human ingenuity and—wherever fishing rises from a subsistence to a commercial enterprise—the profit motive.

The subtitle of “Fishing” rather misleads: Mr. Fagan, an archaeological writer and emeritus professor at U.C. Santa Barbara, devotes nearly half this book to the way fishing was practiced for hundreds of thousands of years in subsistence cultures around the world, beginning with pre-Neanderthal hominids trapping catfish in shallow pools or shrinking rivers. He goes on to survey ancient fishing practices in the East and the West, the Old World and the New, and then the rise and fall of civilizations, the ascendancy of commerce, and such contemporary tools as lines 60 miles long bearing 30,000 baited hooks.

Along the way we find that fishing not only sustained ancient empires and modern nations to a degree we may not have grasped before—the pyramids of Giza, Mr. Fagan notes, could not have been built without hundreds of workers processing thousands of Nile fish each day, both fresh and dried, for laborers—but nurtured them as well.

The cooperative nature of fishing, wherever catches were rich and stable, fostered complex and hierarchical communities long before cities arose. The technologies of boat-building and seamanship seeded exploration. Shells, beads and dried or salted fish sustained long-distance trade networks, and even today, Mr. Fagan writes, fish are “the most traded commodity in the world.” And of course preserved fish—nutritious, lightweight, long-lasting—were the primary fuel of merchant fleets, navies and conquering armies.

No coincidence, then, that civilizations flourished along seacoasts or river systems, and yet we conceive of civilization as primarily an agricultural phenomenon, and we celebrate the farmer as its founder and culture hero. By contrast, fishermen, writes Mr. Fagan, “lived at the obscure margins of society, anonymous, hard-working, and laconic, and largely outside the dramas that interest historians.”

An increasingly important overlap between farming and fishing, however, exists in the practice of aquaculture, which is nearly as old as farming, dating back to the Chinese domestication of Amur carp as early as 3500 B.C. The Romans elevated aquaculture to a high art, and indeed “only [farmed fish] could provide the yields needed to feed the growing population.” Today Asia is in the forefront again. People there have annually produced more farmed fish than wild since 2008.

Otherwise fish remain our last wild food resource, our sole surviving forager’s link to an undomesticated world. Mr. Fagan rightly finds it remarkable that through so many thousands of years the basic technology of fishing—hook, line, net—remained unchanged. These tools were sufficient to destroy several fisheries, most notably the great North Atlantic herring fishery in the 18th century, and to seriously deplete Atlantic cod stocks. These depredations were aided, Mr. Fagan notes, by phenomena like the North Atlantic Oscillation, a century-scale variation in atmospheric pressure that caused the herring fishery to “literally appear and disappear.”

In the West, Christian dogma had defined all creatures as there for the convenience and utility of humanity, and the Catholic Church’s frequent fast days, where the consumption of meat was proscribed, ensured a constant demand for fish. This made the myth that the sea was inexhaustible—or better yet, that intensive fishing improved and enhanced fish stocks—a more comfortable idea than finitude. Fishers knew better, but these marginalized folk were generally ignored. On rare occasions when restraints were imposed—in 1668 the Massachusetts Bay Colony, for example, banned cod fishing during the winter spawning months—they were sooner or later overridden.

Throughout history (and prehistory) the answer to an extinct fishery has been movement: of villages to new locations, or boats to different bodies of water. Of course cities are less portable, as rising sea levels will likely demonstrate. And the last century’s industrialization of fishing, in which a host of new technologies combined to make the practice all too efficient and its vessels global in range, has left the world with no new fisheries to exploit for a population expected to reach nine billion by 2050.

Mr. Fagan’s book is sometimes repetitive and has little of the narrative drive of, say, Mark Kurlansky’s “Cod” (1997) or William W. Warner’s account of Chesapeake Bay watermen, “Beautiful Swimmers” (1976). This is a different sort of book, more big-picture, more of a scholarly exercise, working dutifully through the catalog of times, places and ways in which fishers worked their magic and the world grew to what we know it to be today. In lucid, graceful prose, however, “Fishing” eventually crystallizes into an epic story—one of opportunism, ingenuity, complaisance and denial spanning the breadth of human (even pre-human) experience.

Mr. Fagan holds that this era’s global warming will be another contributing factor to what he foresees, within a few generations, as the wholesale demise of fishing. When this happens, he writes, “a significant link with our long history will have been severed.”

Aside from the matter of whether then we will have eaten our way out of house and home, the end of fishing will mark the end of a primal unity of vocation and avocation. Despite the danger, low pay and frequent discomfort, fishers typically love their work. Mr. Fagan quotes William Ellis, a missionary in Tahiti, who in 1829 could not help noting that men there “set out on their fishing excursions with an exhilaration of spirit equal to that with which a European nobleman pursues the adventures of the chase.”

They can enjoy it, at least, until the adventure is over, until the seven seas are one great desert. Then civilization will be on its own.

—You can find this book on Amazon.  Mr. Carey’s books include “Against the Tide: The Fate of the New England Fisherman” and “The Philosopher Fish: Sturgeon, Caviar, and the Geography of Desire.”