“According to the article below, “La Niña 2020 has evolved quicker and with stronger intensity than many leading climate models predicted.”

NOTE: this article was originally published to WSJ.com on December 4, 2020. It was written by Lucy Craymer. Feature photo via: David Gray / Bloomberg News.

Characterized by cooler-than-normal waters in the Pacific, it causes dry conditions in some parts of the globe, heavy rains in others

La Niña is shaking up agriculture in an already-tumultuous year for commodity markets.

The natural weather phenomenon, known as the cool sister of the better-known El Niño, occurs every few years. It is characterized by cooler-than-normal waters in the Pacific Ocean, causing dry weather in some parts of the globe and heavy rainfall in others.

Past La Niñas have created significant market volatility and raised prices for many foods, and the current edition is already pushing up prices of crops such as corn and reducing supplies of pineapples and mangos. This event has the potential to last till the Northern Hemisphere spring, according to government forecasters in the U.S., Japan and Australia who monitor sea conditions.

So far, dry conditions have been reported in Brazil, Argentina, and parts of the U.S., and bouts of excessive rain in Australia and parts of Southeast Asia.

“La Niña 2020 has evolved quicker and with stronger intensity than many leading climate models predicted,” analysts from J.P. Morgan said in November, calling the phenomenon the “primary supply-side wild card” for agricultural markets going into 2021.

Prices of some U.S. crops have climbed this year, thanks in part to increased demand from China and a pandemic fueled baking craze. Futures prices for soybeans, corn and hard red winter wheat—the kind used in bread—have risen by as much as a third since a rally began on Aug. 10.

As well as affecting prices, volatile weather could interfere with farmers’ ability to harvest and sell their crops. Australian farmer Mark Swift, now harvesting one of the best winter crops he has ever had, is hoping there won’t be much more rain in the coming weeks.

“We expect some rain but La Niña can turn it right on. It’s either Garden of Eden or Mordor,” said Mr. Swift, referring to a grim realm in “The Lord of the Rings.” “At the moment it’s Garden of Eden, so I’m wondering when Mordor is on its way back.” La Niña also comes with the risk of increased hail and wind that, like the rain, could hurt the quality of his canola and wheat.

Australian winter wheat production is expected to more than double in the current season, according to government data, following a widespread, yearslong drought. But heavy rains before harvest could reduce the quality and the amount of wheat produced.

Even if production meets forecasts, it might not make up for declines in wheat output that could hit parts of South America, the Black Sea region and the southern U.S. unless they get rain soon. The regions are going through dry spells, and grain prices are facing upward pressure as a result.

The last La Niña formed in November 2017 and lasted till April 2018. The biggest recent La Niña impact on the global food market came when one developed in July 2010, lasted through May 2011, and was followed by another later that year. The United Nations Food and Agriculture food price index—which includes globally traded commodities including meat, grains and dairy—hit a record high in 2011.

In November, that index was near a six-year high.

La Niña can lift prices for specialty products as well as widely traded global commodities, according to market-intelligence firm Tridge. Unseasonably heavy rain in Costa Rica has hurt pineapple production, it says, though U.S. restaurant closures during the pandemic has reduced demand and held down prices.

Meanwhile, says Jin Woo Lee, a market analyst at Tridge, drier-than normal conditions are likely to hurt mango production in Peru, source of about 12% of the U.S. supply. That could push up mango prices next year, Mr. Lee forecasts. When mango production in Peru dropped significantly in 2018-19, U.S. wholesale prices hit a five-year high, he said.

Mango producers in Vietnam and Thailand are also likely to be hit by abnormal amounts of rain and typhoons, as they were during the 2017 La Niña, he added.

But Peru also supplies around 8% of U.S. avocado imports, and colder temperatures caused by La Niña could boost production by reducing the number of pests that could damage the fruit.

In Southeast Asia, increased rainfall in the coming months could hamper some harvests. 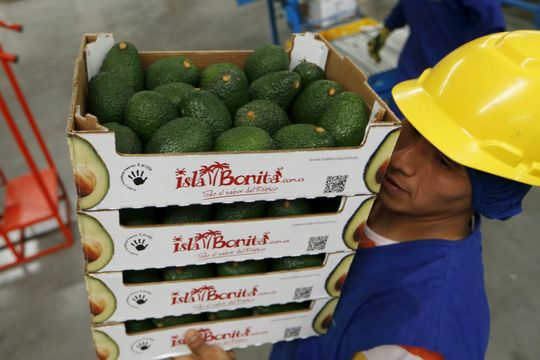 Rubber prices have already climbed this year as China’s economy has returned to growth and automobile production has increased. If La Niña brings heavy rains, collecting sap from rubber trees may be more difficult.

The unpredictability of the situation makes forecasting more complicated for a wide range of commodities, said Tobin Gorey, agri strategy director at Commonwealth Bank of Australia.

“La Niña is always good for farmers in some places and bad for others elsewhere, but the outcome is always uncertain because total supply is different with each episode,” he added.