Using Wolves as First Responders Against a Deadly Brain Disease

For more than 150-years, agencies and the public waged a relentless war on predators of every size and species across North America. As the article below indicates, this mentality is slowly changing. (Those elk hunters and conservationists who still believe that predator removals help deer and elk should read and rethink.)

The authors explain why predators including wolves offer the cheapest and most effective way to control Chronic Wasting Disease (CWD), a rapidly spreading, invariably-fatal brain disease which is decimating North American deer and elk. Like COVID-19, smallpox, measles and other zoonotic (animal) diseases, CWD could spread to humans.

CWD was “created” in a state wildlife experimental station located in Fort Collins, Colorado, where mule deer were being held in close confinement. It was spread by a host of accepted wildlife “management” practices—often conducted and promoted by wildlife agencies—that unnaturally concentrate animals in very high numbers for long periods over infected areas through the use of artificial feed, high fences and predator removals.

CWD control by wolves and other predators is but one example of why systems benefit from biodiverse populations of plants and animals interacting as nature intended.

NOTE: this article was originally published to NYTimes.com on November 13, 2020. It was written by Jim Robbins.

Some scientists say that the predators are essential to curbing the spread of Chronic Wasting Disease because they pick off weak deer.

Are the wolves of Yellowstone National Park the first line of defense against a terrible disease that preys on herds of wildlife?

That’s the question for a research project underway in the park, and preliminary results suggest that the answer is yes. Researchers are studying what is known as the predator cleansing effect, which occurs when a predator sustains the health of a prey population by killing the sickest animals. If the idea holds, it could mean that wolves have a role to play in limiting the spread of chronic wasting disease, which is infecting deer and similar animals across the country and around the world. Experts fear that it could one day jump to humans. 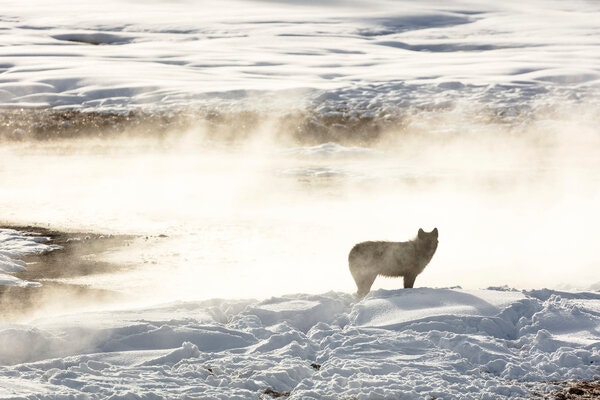 A wolf from the Wapiti Lake pack near a hot spring of Yellowstone National Park in Wyoming. Credit…Jacob W. Frank/National Park Service, via Associated Press

“There is no management tool that is effective” for controlling the disease, said Ellen Brandell, a doctoral student in wildlife ecology at Penn State University who is leading the project in collaboration with the U.S. Geological Survey and the National Park Service. “There is no vaccine. Can predators potentially be the solution?”

Many biologists and conservationists say that more research would strengthen the case that reintroducing more wolves in certain parts of the United States could help manage wildlife diseases, although the idea is sure to face pushback from hunters, ranchers and others concerned about competition from wolves.

Chronic wasting disease, a contagious neurological disease, is so unusual that some experts call it a “disease from outer space.” First discovered among wild deer in 1981, it leads to deterioration of brain tissue in cervids, mostly deer but also elk, moose and caribou, with symptoms such as listlessness, drooling, staggering, emaciation and death.

It is caused by an abnormal version of a cell protein called a prion, which functions very differently than bacteria or viruses. The disease has spread across wild cervid populations and is now found in 26 states and several Canadian provinces, as well as South Korea and Scandinavia.

Cooking does not kill the prions, and experts fear that chronic wasting disease could spread to humans who hunt and consume deer or other animals that are infected with it.

The disease has infected many deer herds in Wyoming, and it spread to Montana in 2017. Both states are adjacent to Yellowstone, so experts are concerned that the deadly disease could soon makes its way into the park’s vast herds of elk and deer.

Unless, perhaps, the park’s 10 packs of wolves, which altogether contain about 100 individuals, preyed on and consumed diseased animals that were easier to pick off because of their illness (The disease does not appear to infect wolves).

“Wolves have really been touted as the best type of animal to remove infected deer, because they are cursorial — they chase their prey and they look for the weak ones,” said Ms. Brandell. By this logic, diseased deer and other animals would the be most likely to be eliminated by wolves.

Preliminary results in Yellowstone have shown that wolves can delay outbreaks of chronic wasting disease in their prey species and can decrease outbreak size, Ms. Brandell said. There is little published research on “predator cleansing,” and this study aims to add support for the use of predators to manage disease.

A prime concern about the spread of chronic wasting disease in the Yellowstone region is the fact that Wyoming maintains 22 state-sponsored feeding grounds that concentrate large numbers of elk unnaturally in the Yellowstone region. And just south of Grand Teton National Park lies the National Elk Refuge, where thousands of animals, displaced by cattle ranches, are fed each winter to satisfy elk hunters and tourists. Many wildlife biologists say concentrating the animals in such small areas is a recipe for the rapid spread of chronic wasting disease.

When cases of the disease among deer ranged from 5 to 50 percent in Wisconsin and Colorado, those states were considered hot spots. But if the disease gets into game farms like the ones in Wyoming, “prevalence rates skyrocket to 90 or 100 percent,” said Mark Zabel, associate director of the Prion Research Center at Colorado State University.

Prions are especially deadly. Unlike bacteria and viruses, prions can persist in soil for 10 years or more and live on vegetation. Even if a herd dies out or is culled, new animals moving in can become infected.

The origin of the disease is unknown. Andrew P. Dobson, a professor of ecology and epidemiology at Princeton who has studied predator cleansing, believes the illness is largely the result of ecosystems with too few predators and scavengers.

He speculates that the disease may have come from deer living in proximity to sheep in Colorado or Wyoming, where it was first identified. Sheep have carried scrapie — effectively mad cow disease for sheep — for centuries. Dr. Dobson has theorized that after a contaminated animal died, it may have lain on the ground for a while in the absence of predators and scavengers, which would usually clean up carcasses.

Elk and deer must have calcium, he said, and they may have eaten the bones of a contaminated animal and spread the disease. 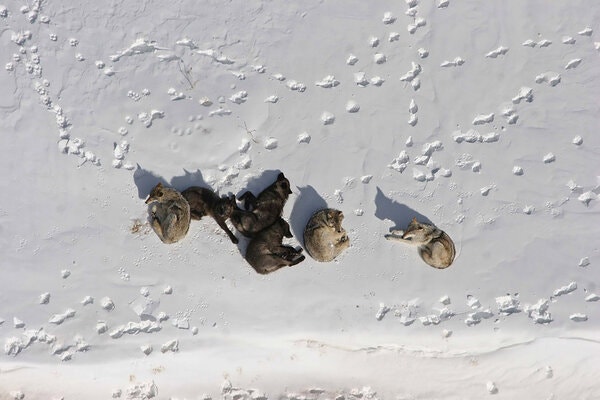 Officials say wolves may be able to detect the disease long before it becomes visible, through smell or a slight change in the movement of prey that humans might not notice.Credit…National Park Service

The absence of wolves throughout much of the West may also have allowed the disease to take off. “Taking the sick and weak removes chronic wasting disease from the population, because any animal showing any signs of it will get killed and eaten by the wolves,” Dr. Dobson said. “The rest of the carcass gets cleaned up by the coyotes, the bald eagles, ravens and bears.”

“Without predators and scavengers on the landscape, animal components last much longer, and that can definitely have an impact on the spread of disease,” Ms. Brandell said.

Restoring the population of predators in national parks and wild lands would go a long way toward healthier ecosystems with less disease, Dr. Dobson said.

“Wolves help remove sick animals, but animals don’t get visibly ill for about 2 years,” he said. “So they are carriers and spreaders but don’t get the classic symptoms.”

Mr. McDonald said that maintaining a large enough wolf population outside of Yellowstone to control chronic wasting disease would require so many wolves that it would be socially unacceptable, especially to ranchers and hunters.

The state’s approach to controlling the disease, he said, is to increase the number of deer that can be killed in places where the disease is growing.

Ms. Brandell, however, said that wolves may detect the disease long before it becomes apparent to people, through smell or a slight change in the movement of prey, which could be beneficial.

“Wolves wouldn’t be a magic cure everywhere,” she said. “But in places where it was just starting and you have an active predator guild, they could keep it at bay and it might never get a foothold.”