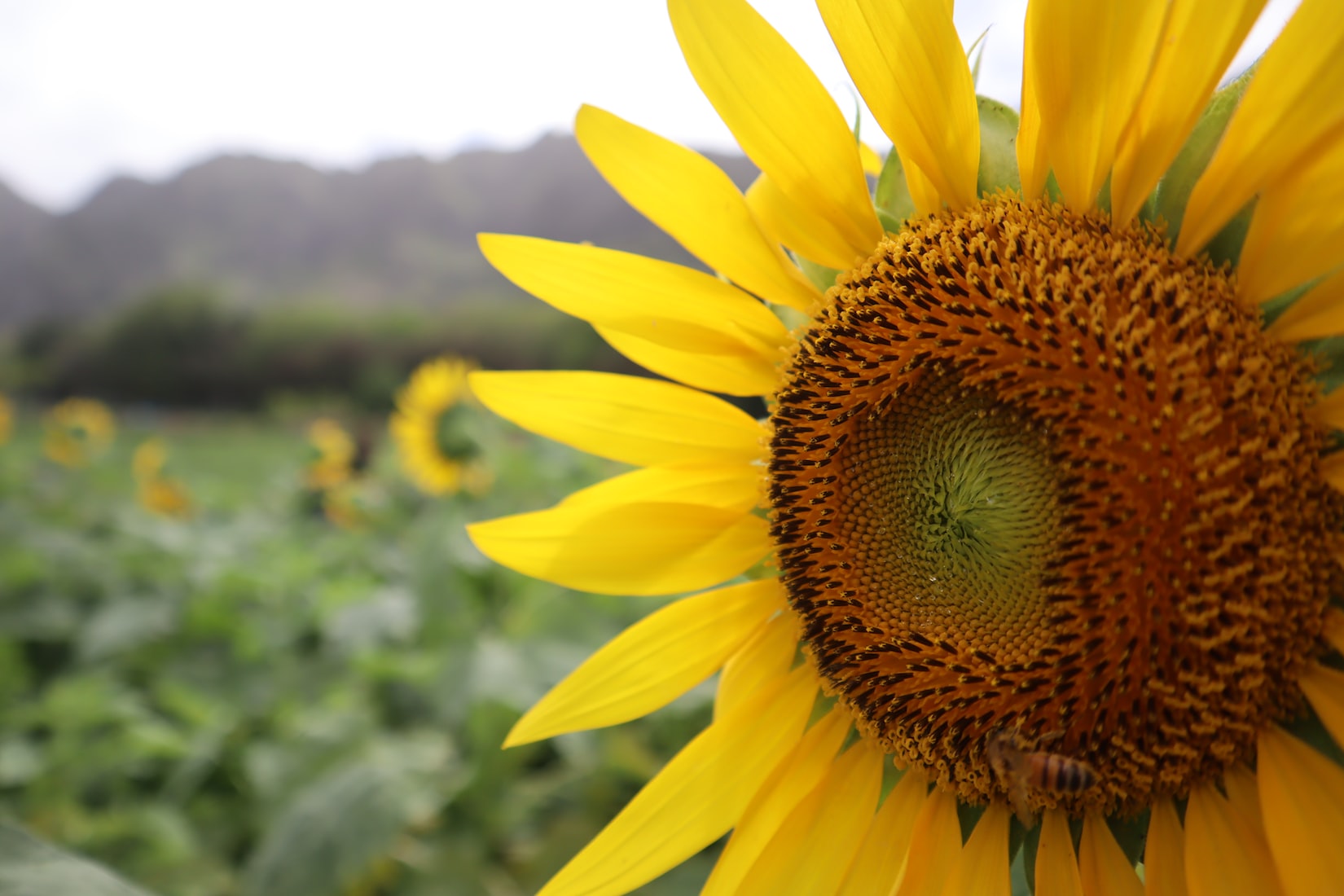 These lessons, from  organic farming, are completely portable to desert grasslands restoration.

By studying the immune systems of plants, they’ve developed a technique that eliminates the need for chemicals.

“In the Second World War,” Samuel Zook began, “my ancestors were conscientious objectors because we don’t believe in combat.” The Amish farmer paused a moment to inspect a mottled leaf on one of his tomato plants before continuing. “If you really stop and think about it, though, when we go out spraying our crops with pesticides, that’s really what we’re doing. It’s chemical warfare, bottom line.”

Eight years ago, it was a war that Zook appeared to be losing. The crops on his 66-acre farm were riddled with funguses and pests that chemical treatments did little to reduce. The now-39-year-old talked haltingly about the despair he felt at the prospect of losing a homestead passed down through five generations of his family. Disillusioned by standard agriculture methods, Zook searched fervently for an alternative. He found what he was looking for in the writings of an 18-year-old Amish farmer from Ohio, a man named John Kempf.

Kempf is the unlikely founder of Advancing Eco Agriculture, a consulting firm established in 2006 to promote science-intensive organic agriculture. The entrepreneur’s story is almost identical to Zook’s. A series of crop failures on his own farm drove the 8th grade-educated Kempf to school himself in the sciences. For two years, he pored over research in biology, chemistry, and agronomy in pursuit of a way to save his fields. The breakthrough came from the study of plant immune systems which, in healthy plants, produce an array of compounds that are toxic to intruders. “The immune response in plants is dependent on well-balanced nutrition,” Kempf concluded, “in much the same way as our own immune system.” Modern agriculture uses fertilizer specifically to increase yields, he added, with little awareness of the nutritional needs of other organic functions. Through plant sap analysis, Kempf has been able to discover deficiencies in important trace minerals which he can then introduce into the soil. With plants able to defend themselves, pesticides can be avoided, allowing the natural predators of pests to flourish.

According to Kempf, the methods he developed through experimentation on his Ohio farm are now being used across North and South America, Hawaii, Europe, and Africa. The entrepreneur promises clients higher-quality crops, bigger yields, better taste, and produce that carries a lucrative “organic” label. Kempf, however, considers his process as an important improvement upon standard organic farming methods. “Organic certification is a negative-process certification,” he explained, “You can do nothing to your field and become certified. In contrast, we focus on actively restoring the balance found in natural systems.”

I recently sought out Samuel Zook, one of Kempf’s earliest converts, at his farm in Lancaster, Pennsylvania to see Advancing Eco Agriculture’s practices in action. After trailing a leisurely horse and carriage in my car for several miles, I was greeted at the farm by a bounding dog and Zook’s young barefoot son. The boy stared silently with his arms wrapped around a watermelon almost as big as himself. In a straw hat and suspenders, he looked like a miniature version of his father. The elder Zook smiled demurely through a neatly trimmed beard and extended his hand before inviting me on a tour of his fields. A hushed gaggle of children tripped along behind us as we walked among the bales of hay and rows of tomatoes, onions, melons, and squash.

Morin: Can you describe the differences between how you used to farm and how you farm now?

Morin: What was the hardest part about making the change?

Zook: Well, there was a big psychological block that I had to get through. I’d see a couple bugs out there and feel like I immediately had to do something about it. But, I learned that if I sit back, things will often take care of themselves. That first summer for instance, we saw a lot of horn worms. Before that, I would have sprayed them right away, but this time I waited and a bunch of wasps came along and killed them. Once I saw that, I started getting really excited.

Morin: So, when you use a pesticide you’re killing the predators too, right?

Morin: Have all of your problems disappeared?

Zook: I wish I could say that, but not entirely. We’re not living in the Garden of Eden yet. The issues I had before have disappeared, but we still have some other issues that we’re working on. One of the main things that has improved is how it feels to farm. Before, if I applied fungicide on my tomatoes, I had to wait three to seven days before I could reenter the area. Now, it’s so nice to just walk in my field any day of the week and not worry a bit. That in itself is huge. The other thing is, when I used to mix these skull-and-cross-bones chemicals to put in my sprayer, I’d have to be suited up. The children would be around and I’d say, “Now, get in the house. It’s not safe.” Now though, if the children want to help, it’s fine. If I want to mix the solutions better, I’ll just put my hand in a stir it around.

Morin: What are some of the problems that you’re dealing with now?

Zook: One of my major issues in the greenhouse is spider mites—little insects that just love a warm, dry environment. It’s very hard to control them, even conventionally. We usually get them under control, but we often lose some yield.

Morin: How do you get them under control?

Zook: Mainly through applying specific trace minerals like iodine and a whole line of ultra-micronutrients. We analyzed the sap of the plants with the help of a lab and I think we’ve narrowed the problem down to excessive ammonium nitrates. If ammonia builds up in the plants, it’s bug food, so we need to figure out a way to convert ammonia fast. I just spent two days with John [Kempf], and he came up with an enzyme cofactor which we’ll use to stimulate that ammonia conversion. We figure things out ourselves now rather than call up the chemical rep.

Morin: What did your chemical rep say when you told him that you didn’t need his services anymore?

Zook: Well, that was an interesting summer. He used to come here every week telling me horror stories about all the diseases in the neighborhood. But, I had made up my made up my mind, “No mas.” He came back every week for eight weeks telling me what I needed to spray. I said, “I’m fine, thanks.” The last time he was here, we were out picking tomatoes and he walked over. He was looking around and talking about this and that, and he didn’t even mention pesticides. “Well,” he said, “your tomatoes look pretty good.” I thought, “Yes!”

Morin: One thing that I immediately noticed is how great everything smells here. Do you still smell it, or are you accustomed to it?

Zook: Oh, I smell it every time I come here. It’s exciting. Those aromas are actually compounds the plants produce to defend themselves from insects and disease attacks. A lot of people don’t realize that plants have immune systems.

Zook: Yes. There’s a real science to walking through a field and pausing to feel what the plants are feeling. There’s a huge difference between walking in this field and walking in one that has had six fungicide applications. The plants just don’t radiate that same vitality. Another thing I learned is that every time you spray with a fungicide or something, it’s actually suppressing the plant as well as the fungi.

Morin: The same way that antibiotics can weaken a person’s immune system?

Zook: Yes. It might kill the disease, but then because it has weakened the plant, a week later the plant is much more susceptible to that same disease again. That’s the way it is with miticide. If I come in here and spray the mites with it, it would kill some of them, but it kills by messing with their hormones, so the ones that do survive will then mature 50 percent faster. So, it’s pretty much guaranteed that I’d have a huge mite outbreak 10 years later. Instead of doing that, let’s figure out what this plant wants and provide it. They really do respond.

Morin: What else can you tell by looking at your plants?

Morin: Before you started with this method were you able to read the leaves?

Zook: You know, I barely noticed them at all. I just planted and sprayed. Now, it’s much more fun.

Think like a gardener: Desert grassland restoration is a gardening challenge, and animals with their impact and fertilizer are the tool that enhances soil fertility to restore plant health.