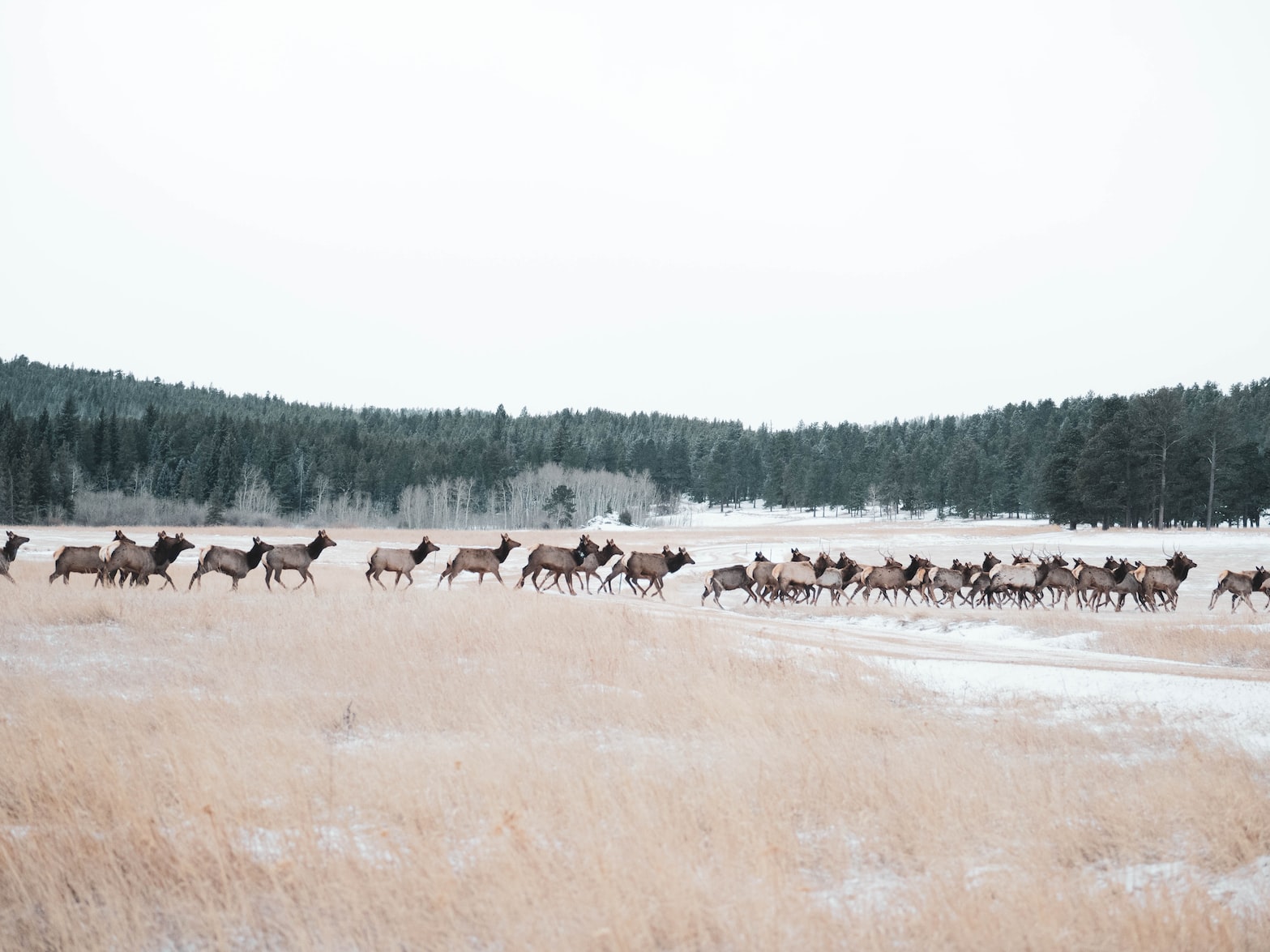 “Colorado Parks and Wildlife has shared a stunning video of a herd of elk running across a landscape near Denver.

NOTE: this article was originally published to Newsweek.com on December 27, 2019. It was written by Kashmira Gander.

‘It is quite the sight to see’

The video shot on the morning of December 26 shows the animals galloping up a hill, around 20 miles northwest of Denver, according to the organisation.

The state is home to the world’s largest elk population, Colorado Parks and Wildlife wrote alongside a tweet of the video.

Colorado is home to some 287,000 elk — the largest elk population in the world. It is quite the sight to see a large elk herd move across the landscape. pic.twitter.com/cRLuMO1C7F

“It is quite the sight to see a large elk herd move across the landscape,” it said.

Colorado Parks and Wildlife also shared a video of a gang of elk running through the morning fog, and an image of bachelor bull elk “looking majestic with the sunrise, clouds and fog behind them.”

On Thursday, a Colorado Parks and Wildlife official warned members of the public not to feed or pet wildlife after footage emerged of a woman trying to touch a bull elk.

Jason Clay, a spokesperson with Colorado Parks and Wildlife told Fox affiliate KDVR: “Feeding or petting wildlife can be very dangerous. It can cause bigger problems down the road, and in the case of big game wildlife like elk, it is against the law.

“When wildlife is fed, they become habituated to people and in turn begin to expect food when they see humans. That level of habituation can lead to dangerous encounters,” Clay said.

Also known as wapiti, a Shawnee Native American term for light-colored deer, elk can grow up to 4 to 5 feet tall at shoulder height, and weigh between 325 to 1,100 pounds. The antlers of a bull can add another 4ft to an elk’s height. These animals largely inhabit western North America, including Yellowstone National Park and the National Elk Refuge in Wyoming. They’re also found in the mountains of Central Asia. The herbivores are built for lengthy, cold winters, and life in open plains, where they live for between eight to 12 years.

Clay told Newsweek: “It is common to see elk herd up like what you saw in the videos.”

The cows, or adult females, calves, and yearling bulls live together in herds most of the year. Mature bulls, meanwhile, live in bachelor groups or alone most of the year, he said.

In March, male elk lose their antlers, before they grow back in May. Elk spend the early summer in mountainous areas where they graze, and females give birth. By late summer, mating season will begin, and males will battle one another using their antlers.

During the breeding season the cows and calves form “harems” with one or two mature bulls, Clay explained.

According to the IUCN Red List, a monitor of threatened species, elk have “least concern” status, as their populations are growing. Their biggest threats include mining and quarrying, as well as roads and railroads, hunting and trapping, and logging and wood harvesting.

“Wildlife, and the abundance of it, is one of the great features of Colorado,” said Clay. “We want people to know about wildlife and to help in conservation efforts to ensure that Colorado’s Wildlife remains abundant for future generations.

“It is important that we continue to preserve habitat, protect key winter range and migration corridors for wildlife as our human population continues to grow,” he said.