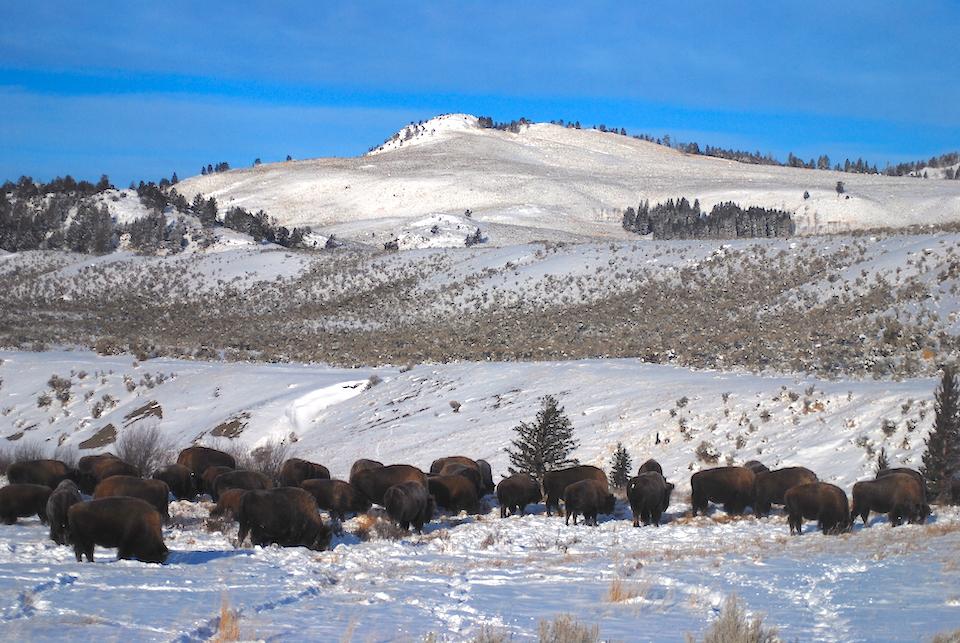 “According to Yellowstone’s senior bison biologist who is quoted below, Yellowstone is the only place in North America with a complete set of predators and herbivores – both of which shape their habitat in ways conventional “managers” neither understand nor like.

NOTE: this article was originally published to NationalParksTraveler.org on April 13, 2020. It was written by Kurt Repanshek.

A new report claiming that bison are damaging the Northern Range of Yellowstone National Park is drawing criticism from a park wildlife biologist who questions whether the scientists behind it are “looking too narrowly” at the range.

A new report claiming that bison are damaging the Northern Range of Yellowstone National Park is drawing criticism from a park wildlife biologist who questions whether the scientists behind it are “looking too narrowly” at the range.

The study by Oregon State University researchers contends that bison “have become a barrier to ecosystem recovery in the iconic Lamar Valley.” Bison, they say, have 10 times the impact elk have on the valley’s vegetation.

“In portions of the Northern Range, like the Lamar Valley where bison are common, woody vegetation has continued to decline,” said Bill Ripple, who works in the university’s School of Forestry and co-authored the paper with Bob Beschta, who also works in the school. “We hypothesized that was because of the bison. We also hypothesized that bison, via the suppression of riparian vegetation and trampling of streambanks, may be increasingly influencing the channel of the Lamar River and tributary streams that cross the valley floor.”

The two trace the recent history of bison in the park, noting that at the turn of the 20th century, there were only about two dozen in Yellowstone following the “great slaughter” of the mid-to-late 19th century. While efforts by park staff to boost the bison population succeeded, producing roughly 750 animals by 1925, the extirpation of wolves and reduction of mountain lion populations gave way to a population boom of elk and bison in Yellowstone.

Park staff aggressively culled elk numbers as they grew, though that ended in the mid-1960s over public outrage. At that time, there were about 4,000 elk and 100 bison in the Northern Range, the Oregon State researchers said, adding that within two years those numbers increased to 20,000 and 1,000.

The wolf recovery program of the 1990s brought predator pressure on the ungulate numbers, and the elk population since has dropped to about 5,500, while bison number around 4,500.

“Changes in elk behavior were observed shortly after the return of wolves,” Beschta said in a university release. “And, with predation pressure from wolves, cougars, and grizzly bears, a degraded winter range, and human hunting of elk that wintered outside the park, annual counts of the Northern Range elk herd began to decrease from their historical highs in the 1990s.”

To support their conclusion that bison are impeding ecosystem recovery on the northern range, the two used photo analysis that indicated “a near complete loss of willow-dominated riparian communities for at least some parts of the Lamar River and the West Fork of Rose Creek.”

“And the roughly 7.5 hectares of aspen stands that were present on the valley floor in 1954 had diminished to one-tenth of a hectare by 2015, representing a 99 percent loss in the cover of overstory aspen trees,” Ripple said in the release. “The rapid increase in bison numbers in recent years suggests the park’s large carnivore guild may be incapable of controlling bison populations. And prey switching by wolves – from elk to bison – looks unlikely to provide a stabilizing effect on bison populations.”

In an email, Beschta said Yellowstone’s Northern Range didn’t historically have a large bison population prior to the 20th century.

“The park’s Northern Range is located at the extremities of the normal migrations for bison on the Great Plains, and thus if bison got into the park, it was likely only briefly,” he wrote. “It is not easy to get into (and out of) the park because there are significant topographic challenges to do so. Also, if significant numbers of bison consistently went into the park, it seems like Native Americans would have utilized this resource, but we have no knowledge that such was the case.

“Thus, we seem to have the abnormal situation of where large numbers of bison are permanent residents inside the park and thus creating all of the impacts we discuss in our publication,” Beschta went on.

“Those authors have a very specific, and I would say narrow, view of what the Northern Range, and in particular the riparian areas of the Northern Range, should look like. I interpret their work, or their conclusions, as anything outside of that narrow vision being a sign of degradation,” Geremia said last week during a phone call.

The biologist said Beschta and Ripple long have studied tropic cascades — “The idea of a trophic cascade is that a predator can affect its food’s food. What that means, say a predator like mountain lions or wolves can affect their food – elk – by changing their behavior, by changing their numbers, which in turn affect their foods, like willows, cottonwoods, grasses, plants, sagebrush.” — and view healthy ecosystems as having such “top down” dynamics.

“They’ve worked very hard to say that ecosystems should have these top down effects. And, in turn, areas like the Northern Range should have riparian areas characterized by lots of cottonwoods and willows,” Geremia said. “But there’s something very unique about Yellowstone that isn’t true anywhere else in North America. We have a large, healthy, valued bison population. And we’re learning that the same way that predators can influence the system from the top down, bison are ecosystem engineers and can affect systems from the bottom up.

Yellowstone, which has a fully intact cast of predators and herbivores, should be allowed to experience both top down and bottom up effects, said Geremia.

“My interpretation is that we’re not facing ecological collapse. Instead, we are seeing the only full, complete, natural system in the continental U.S. where we can have top down and bottom up effects happening at the same time,” he went on. “That really is the role of Yellowstone. That’s what we want to have happen. We want people to come and enjoy it. It’s for their benefit, to see it and experience it. I disagree with their findings.”

The bison biologist, who last fall published research that shows bison play a key role in patterns of spring vegetative rebirth in Yellowstone with their grazing habits, said the decade of work he invested in that paper and other bison research failed to turn up “any negative effects on the ecosystem.”