Rise of the Golden Jackal 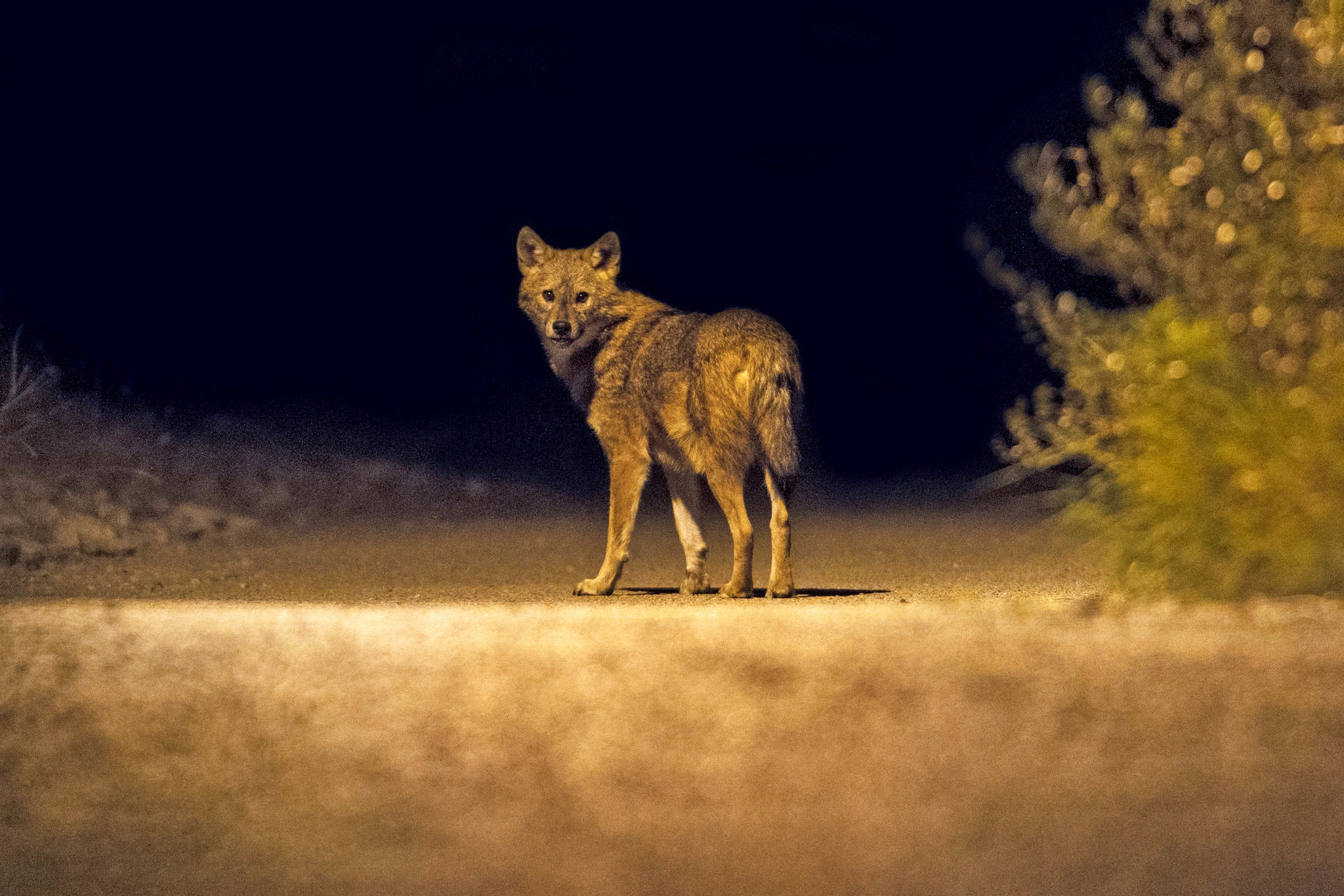 The golden jackal is Europe’s coyote. Like coyotes in North America, golden jackals are spreading because: (1) Mother Nature abhors a vacuum, and (2) natural systems require predators.

When looked at this way, the golden jackal’s spread into empty biological pockets created by the eradication of native predators is natural –  not “invasive”.

NOTE: this article was originally published to NYTimes.com on January 14, 2019. It was written by James Gorman.

A species that was barely known in Europe now vastly outnumbers wolves there, and is rapidly spreading north and west.

On a hill above Trieste, Italy, at the western edge of Slovenia, I heard the golden jackals howl.

This was my second night out with Miha Krofel, a conservation biologist at the University of Ljubljana, driving rural roads through farmland and forests.

The night before, along with two volunteer researchers — one a photographer who had become something of a jackal specialist — we had visited four locations where Dr. Krofel had heard jackals.

Sunset came late, so we didn’t start until around 10 p.m. and finished close to 2 a.m. At each spot, we played a recording of a jackal pack howling and then waited about five minutes for a response. Played it again. Waited. We did this three or four times at each spot.

Away from human habitation, the night soundscape is as rich as the night sky. We stood quietly, not speaking, and listened to insect songs, nightjars clapping their wings and roe deer barking. The small deer’s rough cough startled me when it came from a nearby thicket.
We heard dogs barking, unidentified rustling in the bushes, and a faint “krek krek” call that Dr. Krofel said came from a corncrake, a bird that is endangered in Slovenia.

They were in the area, Dr. Krofel assured me. He and 37 other volunteers — scientists and naturalists, dedicated and informed — have been monitoring the animals throughout Europe. The effort is led by Dr. Krofel and Nathan Ranc, a doctoral student at Harvard and the Edmund Mach Foundation in Italy.

Jackals now vastly outnumber Europe’s wolves, totaling at most 117,000 by the latest official estimate. By contrast, a high estimate of Europe’s wolves is about 17,000. Slovenia itself has somewhere between 200 and 400 jackals, Dr. Krofel estimated, and about 75 wolves.

This is an unheard-of expansion of a medium-sized predator into a continent that it once inhabited only on the fringes. And it has only started to capture scientific interest in Europe, which is beginning to grapple with what the expansion means ecologically, and what the issues are in terms of conservation and legal status.

So far, the jackals have posed some problems for sheep farmers. How the animals will be received by the general public as their numbers rise is an open question.

Smaller than North American coyotes, the golden jackal weighs an average 20 pounds. It is native to the Middle East and southern Asia, ranging as far east as Thailand and inhabiting Iraq, Iran, Afghanistan, Pakistan and India.

The species arrived at the southern edge of Central and Eastern Europe about 8,000 years ago, fossil evidence suggests, and started to expand slowly in the 19th century. But the current boom really began in the 1950s and has accelerated over the past 20 years.

Jackals are one of the least studied canine predators. Like wolves and coyotes, jackals have family-based packs, but the groups tend to be smaller, with four to six animals, while wolf packs may include 15 animals.

A monogamous pair of jackals forms the core of a pack; the young may stay with the parents, or leave to establish their own packs.

Jackals are not as prominent in tales and proverbs as some other animals, although there’s an old quote, variously attributed, that it is better to live like a lion for a day than a jackal for 100 years. Hemingway described “personal columnists” as jackals, which no doubt refers to their scavenging habits.

Jackals did have one moment of past glory. The Egyptian god Anubis was sometimes said to have a jackal’s head. That claim to fame has been lost: The North African animal that may have inspired the sculptures of Anubis has been reclassified as the African wolf.

Still, jackals have a kind of renown in some circles. The New Jersey Jackals, a minor-league baseball team, play at Yogi Berra Stadium, on the campus of Montclair State University in New Jersey. Jackals are, after all, known to be clever, resilient and opportunistic — all good qualities in baseball.

Substantial populations of jackals now live in a number of European countries, including Greece, Slovenia, Croatia, Hungary, Romania, Ukraine, Austria, Italy, and above all, Bulgaria, which has the largest population.

Jackal wanderers — or advance scouts — have been found in France, Italy, Germany, Switzerland, Poland, Belarus, Estonia, the Netherlands and Denmark.

Scientists think jackals began to move north because wolves were targeted for eradication, particularly in the Balkans. That opened a door, since jackals seem to avoid areas well populated by wolves.

Climate change doesn’t seem to have been a factor, although it will probably be significant in the future. Jackals don’t live in places where snow is on the ground more than about 100 days a year. As warming continues and snow cover declines, more European territory will open up to them.

Their ability to travel is clear. Mr. Ranc and Dr. Krofel tracked the movements of one female who covered hundreds of kilometers. She seemed to have found a mate and established a den before she was shot.

The jackals’ expansion is a huge natural experiment, similar to but more surprising than the spread of coyotes in North America. Coyotes were well established in the West and Southwest before they started arriving in the Northeast and Southeast, and lately in Mexico.

In Senozece, in southwestern Slovenia, Dr. Krofel and I visited a sheep farm on a rocky hillside ringed by forest. About 350 sheep were sprinkled across the rough pasture; they moved away in leisurely fashion as we walked up the slope with Dr. Krofel’s two dogs and a hyperactive young cat.
Sheep farming is a small part of Slovenian agriculture, but one likely to be affected by jackals. I asked the farmer, Leon Franetic, about the jackals and whether their presence in his region was O.K. Dr. Krofel didn’t get a chance to translate.

“Not O.K.!” Mr. Franetic said emphatically. He went on at greater length in Slovenian, with Dr. Krofel translating. He had learned to live with some predation, he said: “We’ve gotten used to the wolf,” because one pack roamed nearby.

But jackals were one canine predator too many. In the past three years, wolf attacks had gone down, but now jackals were killing the sheep. In 2017, Mr. Franetic said, he lost 20 to 25 sheep.

Although jackals did not initially expand into wolf territories, Dr. Krofel suggested that the two species seemed able to coexist. Wolves now live deeper in the abundant forests of Slovenia, while the jackals prowl along the edges, closer to farms and towns.

The jackal kills were messier, leaving sheep corpses only partly eaten, Mr. Franetic said. As he saw it, the wolves were professionals, the jackals sloppy amateurs.

Marjan Tomazic, a hunter and forest service official, told us many farmers felt the same disdain for jackals, but were less inclined to abide wolves than Mr. Franetic. Occasionally, for unknown reasons, a wolf or wolves will go on a spree and kill as many as 50 sheep.

Still, “this is the home of the wolf,” said Mr. Tomazic, a confessed admirer.

The next night, we stopped by the annual meeting of about 30 hunting clubs in the Primorska region, in Divaca, a town near Lipica. (The famed Lipizzaners were named after Lipica, since some of the first breeding occurred here.)

Two teenage musicians in traditional dress played folk music on accordions. Club members in uniforms with ties and Tyrolean hats applauded and then listened as the head of the club gave a speech emphasizing that hunters took on the responsibility of conservation and criticizing the government for setting the number of animals to be hunted too high.

We walked through a school building with walls temporarily decorated with the antlers of animals killed by hunters that year. Some of the hunters said the jackals could be a problem, while others felt they should be tolerated, like wolves and bears. Hunted, but tolerated.

One hunter mentioned hearing a pack of jackals nearby, so after the dinner we drove to the location. We stopped in a plateau of fields and apple trees near Trieste, Italy. Dr. Krofel began playing the jackal recording.

Jackal howls are a bit like sirens, but softer and a little wobbly. He said that some people say they sound like babies crying, without that kind of urgency. Nor do jackals have the yips of coyotes or the full-throated baying of wolves. They sounded to me a bit demented, but that’s a human and North American reaction.

There was no response to the first recorded howls. But immediately after the second, I heard a faint howl, and then another one, closer. Then, for about half a minute, a group of jackals alternated distant wails.

Since it is hard to tell individual howls apart from a distance, Dr. Krofel and his colleagues count jackals this way: “One, two, more than two.”

As the calls drifted to an end, he breathed a sigh of relief. “Finally.”

These jackals have established a pack and are reproducing. They are living a successful life. And their offspring have every chance of establishing new packs as they move into Western Europe.

But what will happen as that expansion continues is hard to predict. Mr. Ranc said that if the spread of jackals in Europe shows anything, it reflects “the fundamental uncertainty in ecological systems.”

“Who would have guessed that this small canid would be the likely winner of poisoning campaigns of wolves in the Balkans?” he added.

But in Western Europe, the reaction to their presence may be different, he said. Perhaps stricter procedures for waste management and disposal of livestock corpses on farms will have an impact on the animals. Hunters of small game may object to the jackals’ arrival.

Jackals are just starting to put down roots in Italy, Germany and Austria. What happens when those populations grow should say more about how much of Europe will be open to them.

For golden jackals in Europe, Mr. Ranc said, “The moment of truth is soon to come.”

James Gorman is a science writer at large and the host and writer of the video series “ScienceTake.” He joined The Times in 1993 and is the author of several books, including “How to Build a Dinosaur,” written with the paleontologist Jack Horner.

A version of this article appears in print on Jan. 14, 2019, on Page D1 of the New York edition with the headline: Rise of the Golden Jackal