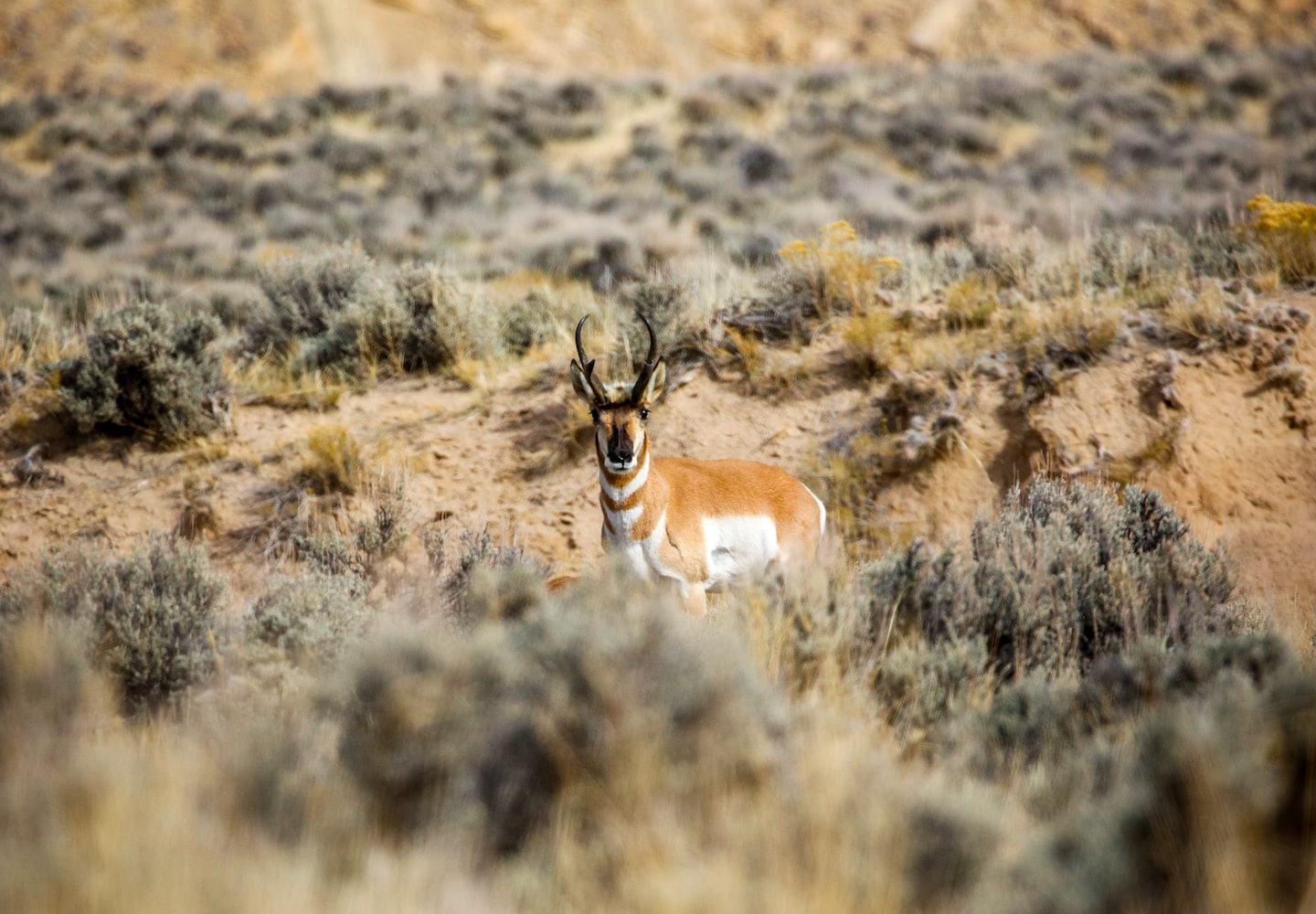 According to the article below, “More than 600,000 miles of fence crisscross the West, possibly making fence modification for conservation “more urgent than currently recognized.”

The lead author’s insights which led her to study fences’ effects on wildlife movements were based on observations she made on a field trip to Tibet. The study analyses 6-reactions of mule deer and pronghorn to fences in a 6,000-square mile area of Wyoming. Specific wildlife-friendly designs are described.

The authors say that in general, fences “are all very necessary for socio-economic reasons.”

NOTE: this article was originally published to wyofile.com on January 14, 2021. It was written by Angus M. Thuermer Jr.

Pronghorn and mule deer alter their natural movement nearly 40% of the times they encounter fences, according to a Wyoming study that could change how wildlife managers worldwide alleviate the toll imposed by such barriers. Pronghorn antelope migrating south for the winter, pass the town of Pinedale. These pronghorn summer in Grand Teton National Park, but must migrate out of the protected area for the winter, passing several highways, fences, and residential areas before they reach their wintering grounds in southern Wyoming. (Joe Riis)

Published in the Journal of Applied Ecology, the research used GPS data from 48 tagged animals in 2014 and 2016, plus the locations of 3,728 miles of fence to demonstrate that the barriers alter natural movements, costing wildlife energy and possibly keeping them from high-quality habitat. Furthermore, researchers observed six different types of altered movements — an important nuance that expands the traditional thinking about fences.

The “non-normal fence behavior” occurred during nearly 40% of the encounters. The most common abnormal reaction was what researchers called a “bounce.” A bounce occurs when animals “move away from fences if they cannot quickly cross.”

The altered behavior likely takes a toll on the wildlife, researchers found. “Such avoidance of fences can drive animals away from high-quality resources and reduce habitat use effectiveness,” they wrote.

Centered on Sublette and Teton counties, location of the Path of the Pronghorn migration route and parts of the Red Desert to Hoback mule deer route, the study says fencing may affect the ungulates “across large portions of the landscape.” The average antelope in the study encountered a fence 248 times a year, the average deer 119 times.

Researchers at the University of California, Berkeley, and in Germany and Laramie wrote the paper. Lead author Wenjing Xu said it could be used to prioritize fence modifications or reconstruction, which can cost $10,000 a mile.

Land and wildlife managers are taking note, Xu said. “Local agencies told me about their interest in using this,” she said. The study area covered 6,726 square miles where the average antelope encounters a fence 248 times a year. (Journal of Applied Ecology)

“We are not trying to say any type of fencing is bad,” Xu said. In general, fences “are all very necessary for socio-economic reasons.”

The study “has potential to be very helpful if used in the right way,” said Jim Magagna, executive vice president of the Wyoming Stock Growers Association. To modify fences, “we’ve got to identify some financial incentives” for private landowners, he said.

“It’s going to take some dollars, and they’re going to have to be dollars beyond the ranchers,” he said. “Funding sources are going to be critical.”

In 2018 Wyoming lawmakers requested that Yellowstone and Grand Teton national parks collect a wildlife conservation fee from visitors to be distributed to Wyoming, and in the case of Yellowstone, to Montana and Idaho as well. But no entity has implemented a program enabling the federal government to collect such an assessment and distribute it to states.

Magagna called the parks concept “intriguing.” But, he said, “I don’t have the answer how you work it out.”

Intriguingly, Xu found inspiration for her investigation from a visit to Tibet, a place stereotyped as having only wide-open spaces. When she visited the high desert plateau for a six-month internship, she saw otherwise.

“When I was traveling across Tibet … what I saw was fences everywhere,” she said. “It was striking. My original motivations [began] back in Asia.”

At Berkeley, she studies under Arthur Middleton, a researcher who specializes in migrations and the Yellowstone area. He co-authored the paper with her and Nandintsetseg Dejid, who has studied movements of Mongolian gazelle, goitered gazelle, saiga antelope and Asiatic wild ass in the Gobi‐Steppe ecosystem.

The Wyoming study created a modeling tool that is “very flexible” and globally adaptable, Xu said. It can highlight problems well beyond the 6,726-square-mile Teton-Sublette study area, where there are enough miles of fence to circle Wyoming almost three times.

Worldwide, most fences are not mapped or documented, researchers wrote. “Different managers in different areas — they can adjust it to fit different wildlife species,” Xu said of the study’s tool.

Nuances of an encounter

Before her work, many wildlife observers saw fences in black and white — either wildlife could get through, or not. Xu expands that to six reactions. “This may be the first of this type,” she said of her cataloguing of wildlife responses to fences. Lead author Wenjing Xu characterized six types of reactions antelope and deer have when encountering a fence, distinctions that may have never been made before but that are critical in determining the effects fences have on wildlife. (Journal of Applied Ecology)

Observers have watched pronghorn pace back and forth at a fence and described the behavior “but didn’t go into [analysis] in a systematic way,” she said.

During her field observations in Wyoming, Xu categorized “all the possible ways,” animals could respond to fences. She came up with six responses.

The first is when animals make a “quick cross,” with no apparent hindrance. The second is called “average movement” when an animal can cross a fence line at will to use both sides. Both of these are considered benign encounters.

The next three of the classified reactions alter natural movements. Xu characterized her third reaction as a quick bounce — a retreat. The fourth is a back-and forth, in which an animal appears to keep looking for a place to cross along a defined stretch.

Such a level of detail may seem excessive to layman. But, “all these are very important for me when I think about them conceptually,” Xu said.

In many cases stock managers can construct “wildlife friendly” fences that also restrain stock, Magagna said. The bottom wire on a traditional Western fence, for example, can be un-barbed and 18 inches off the ground to allow antelope to scoot under.

That would keep cattle from meandering “unless you’re in a pasture that would have small calves,” he said.

An un-barbed top strand can be low enough to enable most wildlife to jump over; ranchers and land managers can build lay-down fences lowered during migration seasons. Electric fencing has some applications as well.

“The tools are much more available today,” Magagna said.

Elements of the study need more examination, Magagna said, including an investigation behind the reason for “bounce” behavior.

Maybe, he said, “they just run and go over here to get a bite of food,” and don’t suffer any harm. Xu agreed the motivation behind a bounce remains undocumented. Right now, “we don’t know if they don’t want to cross or don’t need to,” she said.

Xu’s study leads to the next challenge, at least on private land, Magagna said. That’s ranch-by-ranch engagement with stockmen and -women.

“A typical rancher who’s out there, he or she could tell you where the wildlife bunch up against a fence,” he said. “You sit down with each rancher that has a fence and find out what their needs are. There may be some instances where fences can’t be changed. We can identify a common approach that works for both.”