National Parks Are Getting Trashed During COVID-19, Endangering Surrounding Communities 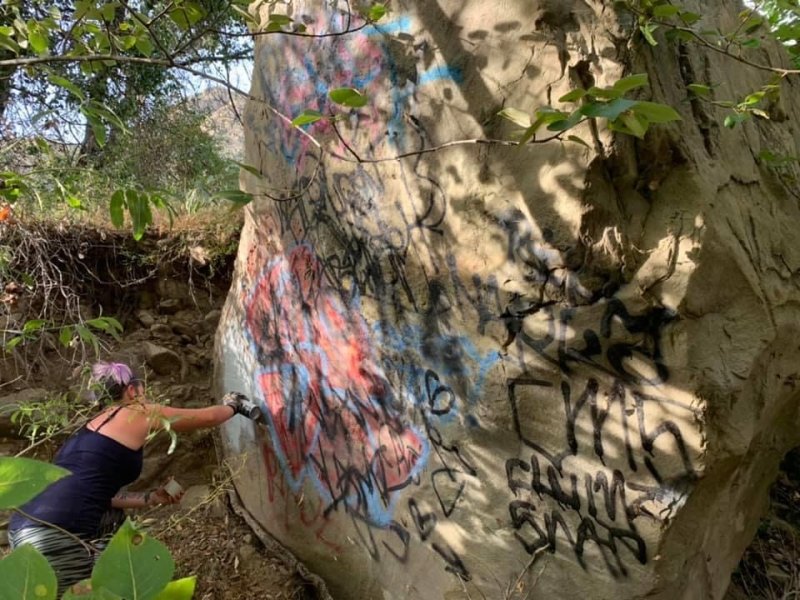 For many decades our national parks and forests have suffered as Congress has diverted federal lands’ mineral royalties, which are supposed to support public lands. As a result, infrastructure maintenance including upkeep of trails, roads and facilities increasingly is deferred.

As described in the article below, public use has surged during the pandemic. While this is a good thing, the increased numbers of visitors has to be accommodated by a limited and out-of-repair system of trails and facilities.

Recently, the president signed a major new executive order that fully funds the restoration of park and forest roads, trails and facilities—and guarantees maintenance funding into the future. This addresses money.

In this time of increased use, civil disorder in our parks, just as in our cities, seems to be a tolerated consequence of COVID. To protect our beloved parks from damage, the answer isn’t to close them, but to enforce the laws against destruction of public property.

NOTE: this article was originally published to Time on July 22, 2020. It was written by Andrew Chow.

Ellie Mora has been running down the Santa Paula Canyon in Ventura County, Calif. on a weekly basis for years.

She likes the serenity of the desert: the waterfalls that mist into placid green pools and the burnt orange wildflowers that bloom in the spring. For many like her, the park serves as a calming escape from the stresses and smog that can accompany everyday life in Southern California.

But this spring, following the onset of coronavirus, the park’s condition started to drastically worsen. Litter accumulated on the sides of trails and at watering holes. Graffiti materialized on rocks. Parked cars stretched for more than a mile near the bottom of the trail, and hundreds of people splashed maskless in the canyon’s pools.

“I can’t tell you how much pee and feces were littered along the trail,” Mora said. “It’s disgusting.”

The situation got so bad that the U.S. Forest Service shut down the trail in mid-May, citing the crowds and the trash. Since then, Mora and a team of volunteers have been working long days to clear out the litter and paint over the graffiti.

“It’s been decimated by people who have never hiked before, coming back there with no morals,” she says. “It’s insane to see people acting the way they have, like the end of the world.”

During the pandemic, Mora is far from the only one to witness worrying changes in national and state parks. Many of these spaces, supposed to be untouched swaths of time-proof wilderness, have been overrun by first-time visitors seeking refuge from quarantine, joblessness, or the inability to take far-flung vacations. And as people have flooded into the parks, new crises have arisen for rangers and nearby communities, including indigenous populations who were already particularly susceptible to the virus.

“A lot of tourists who come through here, they think it’s unfair that we’re trying to have a lockdown and that we’re trying to keep outsiders out,” says Alberta Henry, a member of Navajo Nation who operates a camping rental business outside the Grand Canyon. “A caucasian man from Tennessee came onto the reservation and told my nephews, ‘Get those effing masks off! What’s wrong with you?’ People are openly racist, even in front of my children.”

Before the pandemic, national parks were already exploding in popularity. In 2019, the National Park Service tallied 327 million visits—9 million more than the previous year, and the third-highest total since record-keeping began in 1904.

Many of these parks briefly shut down once the pandemic hit a crisis point in March and April. But as states began to reopen, so did parks, albeit with some restrictions. At Rocky Mountain National Park—the third most-visited national park in the country—rangers implemented a timed entry system in May, with the goal of keeping the park at 60% capacity.

But eager backpackers have found a loophole around the restrictions: arriving early in the morning before the regulations are enforced. Paulina Arcuri, a Boulder resident who climbs and hikes regularly at the park, was accustomed to arriving before 6 a.m. to avoid the thunderstorms that roll through in the afternoon. Recently, she’s been arriving before the sunrise to a full parking lot. “It’s completely packed,” she says. “And before, it would usually be mostly Colorado license plates. Now, I’m seeing maybe 75% from out of state. There are so many Texas plates it’s insane.”

Inside the park, Arcuri says the timed system isn’t preventing crowds from swelling at particular points like at lookout points or summits. “Even through a mask, it smells like you’re at Disneyland,” she says. She says she’s seen discarded masks strewn about the park, and that these newfound visitors aren’t paying heed to trail etiquette or environmental guidelines. “To step off the trail is to endanger 100-year-old moss,” she says.

Wendy Koenig, the mayor of Estes Park— the town that sits at the park’s entrance—says that campgrounds are full. Her downtown is full of visitors every weekend. Local businesses have enforced strict social distancing measures, and so far the number of cases in the town has been low. “It’s really in the hands of the visitors,” she says. “If they will cooperate and wear their masks, they can keep all of us safe and keep their vacation destinations open.”

In interviews, rangers at Big Bend National Park in Texas, Great Falls Park in Maryland, and Glen Canyon National Recreation Area in Utah and Arizona said they have all seen increases in visitation following COVID-19, particularly from first-timers. RV and camper sales have surged; so have campground reservations across the country. With travelers still leery of airplanes, and most indoor entertainment options closed, many families seem to be embracing a relatively cheap getaway option where the risk of catching the virus is much lower than it is indoors.

“We don’t want to take any chances”

But this enthusiasm is sowing chaos and anxiety in communities connected to national parks—particularly indigenous communities who have been hit disproportionately hard by the virus. Limited health services, shaky infrastructure, and high rates of immunocompromising diseases have all increased the vulnerability of indigenous populations during the outbreak.

In Montana, Glacier National Park borders the Blackfeet Nation. In past years, a good chunk of Glacier’s three million annual visitors entered the park through the Blackfeet reservation, providing a major boost to the local economy. But the Blackfeet decided to remain closed this summer, especially given a recent study that showed that in Montana, Native Americans made up more than a third of the state’s COVID-19 deaths despite making up less than 7 percent of its population.

“Our elders are the keepers of our culture and history—they’re one of the most vulnerable,” Robert DesRosier, who leads the tribe’s COVID-19 response team, says. “We don’t want to take any chances of losing anybody.”

The closure of one edge of the park has created a bottleneck on the other side, with harried rangers dealing with traffic congestion. Meanwhile, DesRosier says that visitors are still entering the reservation unwittingly. “We have people that still show up that are uninformed, who don’t even realize they’re on an Indian reservation,” he says. “We’ve had people that establish a private campground and invite guests in, or jump on a Side-by-Side or a four wheeler and drive it all over the country without permission.”

“We’ve been focusing on educating,” he says. “We’re trying hard not to take a punitive approach.”

At the Grand Canyon, parks officials have worked with nearby tribes, including the Navajo Nation, to close off certain entrances to the park. But trash is still accumulating in the park, according to Alberta Henry, whose camping rental business is located outside the canyon. Emergency medical workers are short-staffed. And visitors are still coming into Navajo towns and wreaking havoc.

“The businesses here in Cameron [Ariz.] get negative feedback because tourists get mad about having to wear masks and use hand sanitizer before they come in stores,” Henry says.

Henry and three other members of her family contracted COVID-19 earlier in the year; she’s had to cancel hundreds of reservations, and her income has all but disappeared. Despite the economic hardship, Henry is deeply concerned about the rising cases in Arizona and says she is willing to stay closed until next season. “I’m really nervous,” she says. “I want it to be safe before I open again.”

Big Bend National Park in Southwest Texas also shut down in early July after an employee contracted the virus and as cases in the region started to mount. “We’re 100 miles away from the nearest hospital, which is quite small,” ranger Adam Prato says. “If someone here is positive, that would be a real strain on the community.”

“Back to how it was”

Then there’s the impact on the parks themselves. Virginia State Parks rangers have reported “illegal all-terrain vehicle use, trash dumping,” and “boulders thrown from landmarks,” according to the Bay Journal. At Arizona lakes, visitors have left behind dirty diapers, shoes, broken glass and entire grills, AZ Central reported.

Back at the aforementioned Santa Paula Canyon in the Los Padres National Forest, which is a convenient 90-minute drive from central Los Angeles and has long had a history with litter and graffiti, scenic photos shared by social media “influencers” from the canyon this spring spurred a copycat rush and an astonishing level of overcrowding. “I’d describe it as folks celebrating the 4th a couple months early,” says Andrew Madsen, a spokesperson for the forest. “You had too many people, and there was not a lot of practicing of social distancing or trail stewardship.”

After the park’s closure, Mora and other volunteers have contributed hundreds of hours of cleanup work. Volunteers like these across the country are becoming increasingly crucial to the U.S. Forest Service and the National Park Service due to their already existing economic frailties. Many areas are understaffed and many repair work proposals have yet to be fulfilled; President Trump, during his tenure, has repeatedly proposed budget cuts to the organization. Since coronavirus, local budget shortfalls have led to the scaling back of some parks jobs—including a bear whisperer in Mammoth Lakes, Calif., who was in charge of keeping hikers safe from bears.

Mora worries that when the Santa Paula Canyon opens back up on July 31, people will go right back to trashing it, and that she and other volunteers could be fighting an uphill battle for months or years to come. “This area was a beautiful, sacred place to the Native Americans who used to live here,” Mora says. “I hope we can turn it back to how it was before graffiti and trash were even in the canyon.”

Working remotely but don’t want to stay indoors? Here are the best states to seek out
https://www.allconnect.com/blog/best-places-to-work-remote-in-nature