The labeling on “organic” meat is as misleading as most other food labels.

NOTE: Article was originally published on SAExpressNews.com on April 24, 2016

That pricey grass-fed burger you had for lunch may have come from a cow that ate more than just grass.

As it stands now, the U.S. Agriculture Department will consider any labeling claim relating to what percentage of a cow’s diet was grass, as long as the company can back it up with documentation. Some say that’s misleading and that only animals fed grass from beginning to end should be labeled grass-fed.

And there lies the rub: As consumers increasingly spend more money on meat they consider healthier and more sustainable, there’s no one agreed-upon definition for grass-fed beef. Many in the organic and natural meat industry are calling for a tougher measure after a voluntary federal standard was dropped earlier this year. Meanwhile, surging sales of steaks and burgers processed from grass-fed cows are creating business opportunities throughout the supply chain.

“It’s all about the taste. … We’re trying to compete for mainstream consumers delivering a great-tasting product that happens to be healthy,” said Lenny Lebovich, CEO of PRE Brands, a Chicago-based grass-fed beef company that launched last year. “For grass-fed (beef) to have the success it wants to have, there needs to be a pure standard.”

In January, the Agriculture Marketing Service, an arm of the Agriculture Department, withdrew the grass-fed standard that had been in place for about 10 years, saying it lacked the statutory authority to enforce it. The voluntary standard defined grass-fed as meaning the cow ate only grass and foraged plants from weaning to slaughter.

Agriculture Department officials have said dropping the standard will have little effect, but many in the grass-fed beef business disagree and contend that the standard was important in providing a minimum threshold by which a company could declare its products grass-fed.

Last month, several industry trade groups signed a letter urging the Food Safety Inspection Service, another arm of the Agriculture Department, to adopt and use the rescinded standard when approving labeling for grass-fed beef products.

As it is now, the Food Safety Inspection Service allows and approves labels for varying degrees of grass-fed beef as long as a company can support its claim. For example, a company might make the claim that its beef is 50 percent grass-fed but supplemented with grain feeding.

“As with anything that becomes more than just a food trend, people see money to be made and they want to slap a label on it,” said Marilyn Noble, a spokeswoman for the American Grassfed Association, one of the organizations that signed the letter urging the inspection service to reinstate the standard. “We think it’s important there is a standard.”

The distinction is important to companies such as PRE Brands, which sells its products in more than 300 stores, mostly in the Midwest, and plans to triple its reach in the coming year. Sales are expected to hit “north of $10 million” this year as the company rapidly grows, Lebovich said.

PRE Brands’ beef comes from New Zealand cattle fed only grass from weaning to slaughter, Lebovich said, and is processed at a plant in Chicago.

The lack of a federal standard can create confusion among consumers about what they’re buying, and that’s bad for business, Lebovich said.

For decades, most American cattle have spent their final days in feedlots where they’ve been fed grains, including corn and soybeans, and given other supplements, which could include antibiotics and hormones — an economical system to feed one of the world’s most carnivorous countries. Today, grass-fed beef represents about 6 percent of the U.S. beef supply, according to the Agriculture Department.

But increased consumer demand for food considered healthier and more transparently produced, as well as the rise of diet trends that cut out grains and processed foods, have led to a renaissance of sorts for beef produced the old-fashioned way.

That’s almost double the $56.2 million in sales in the same period two years ago and represents a 32.5 percent increase from the $84.4 million last year.

“Basically, it comes down to consumer demand for transparency,” said Kim Kawa, natural products specialist for SPINS. “Antibiotic- and hormone-free were the big natural standards for beef, but as consumers demand more transparency, new labeling follows.”

It’s unclear what, if any, changes the Agriculture Department will implement.

“We have received the groups’ letter and will take their recommendations into consideration,” department spokeswoman Catherine Cochran said in a statement. “In the meantime, we continue to review companies’ claims and supporting evidence closely to ensure consumers are presented with accurate and meaningful information about the products they are buying.”

In the absence of such a standard, retailers have to work harder to discern what exactly they’re selling, said Tony Busalacchi, vice president of meat and seafood for Roundy’s stores.

“There are hundreds of (grass-fed beef suppliers) knocking on our door, but who really believes in what they’re doing and who’s following the rules?” Busalacchi said.

On average, grass-fed beef costs $4 to $5 more per pound than conventionally grown beef, Busalacchi said. But customers, and particularly millennials, are “buying this stuff like there’s no tomorrow,” he said, largely because it’s considered to be healthier than beef from grain-fed cows.

An often-cited study by researchers at California State University in Chico in 2010 found that grass-fed beef has higher levels of omega-3 fatty acids, lower levels of dietary cholesterol, and more vitamins and antioxidants.

In October, a study by the World Health Organization’s International Agency for Research on Cancer linked the cooking of red meat to cancer. In a panel discussion after that announcement, researchers with the Harvard T.H. Chan School of Public Health said there’s not enough data from large epidemiological studies to determine whether grass-fed beef would present any less of a cancer risk.

For some consumers, they’ve heard enough to make the extra cost of grass-fed beef worthwhile.

“It has more flavor because of the grass. And it’s better for you,” said Stoney Fritz, 40, of San Jose, California, walking out of a downtown Chicago Whole Foods Market. “You can tell just by looking at it.”

In Palestine, Illinois, about four hours south of Chicago, the Shaw family raises about 200 head of grass-fed cattle on about 700 acres at Flying S Beef. The cows are outside year-round and eat hay when there’s no grass in the winter, said Penny Shaw, 36, who handles the marketing. 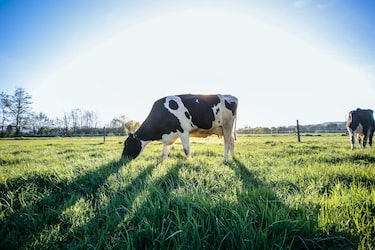