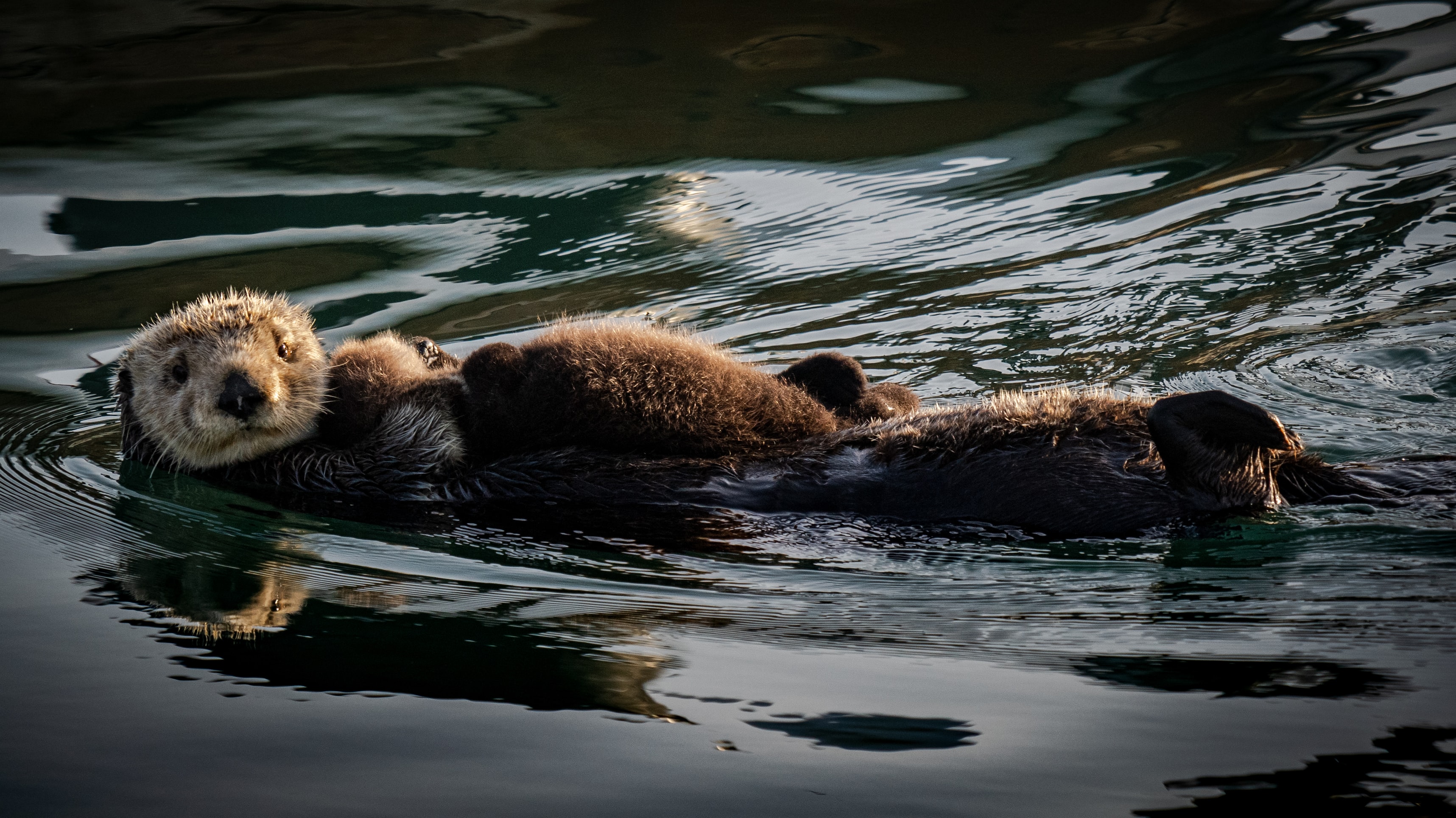 This article discusses one of several reasons that sea otters are essential to the health of the Pacific Coast’s marine systems.

The seagrasses otters maintain also support the salmon, steelhead and commercial fisheries. Whether on land or sea, predators are necessary to the health of habitats and everything in them.

NOTE: this article was originally published to NationalGeographic.com on October 14, 2021. It was written by Douglas Main.

Covered in lush fur, the thickest in the animal kingdom, sea otters can live their entire lives in the ocean, feeding heavily upon seafloor animals such as shellfish and crustaceans.

In British Columbia, Canada, sea otters often eat clams, which bury themselves in meadows of eelgrass (Zostera marina), a wide-ranging aquatic plant species. The predators use their sensitive whiskers and front paws to feel for clams in the soft seafloor. When they find one, they dig it up and pry it open—or use a rock to break the shell—before scarfing it down.

Eelgrass meadows where sea otters live have bare patches and divots in the seafloor where the animals have dug, while meadows without the animals commonly have a dense mat of vegetation.

As it turns out, the meadows with otter inhabitants are more robust, with more genetically diverse eelgrass, according to a new study published October 14 in the journal Science. That’s because by foraging—and gently disturbing—the seabed, the otters prompt the plants to flower and produce seeds. What’s more, their digging provides more space and sunlight for seeds to settle and germinate.

The finding is a powerful example of how predators such as otters influence their ecosystems beyond predation, often in unseen and little-known ways, says study leader Erin Foster, a research associate at the Hakai Institute, a nongovernmental organization devoted to coastal studies and conservation based in British Columbia.

It also means sea otters, an endangered species, are vital to their environments and give eelgrass meadows a better chance at staying healthy and surviving. Eelgrass and other seagrasses are imperiled worldwide, in part due to warming waters brought on by climate change, explains Jane Watson, a study co-author and an emeritus professor of marine ecology at Vancouver Island University.

Seagrass habitats are also important nurseries for many fish and crustaceans, provide food for animals such as gray whales and sea turtles, sequester greenhouse gases, and filter harmful pollution and bacteria from the water.

“Genetic diversity typically builds resilience to change, and considering the challenges we’re facing…this will be important for eelgrass meadows,” says Foster, who conducted this research while completing a PhD at the University of Victoria.

The great otter hunt
Sea otters once roamed the near-shore waters from the tip of the Baja Peninsula all the way up to Alaska and the Aleutian Islands as well as the coast of Russia and Japan. But following European colonization, hunters heavily targeted them for their fur, especially in the 1800s. This reduced their population from an estimated 300,000 to below 2,000 by the early 1900s. Luckily, small pockets of otters survived in Alaska and California, and today they have rebounded in certain parts of North America’s western coast.

North America has two sea otter subspecies, the southern sea otter (found in California), and the northern sea otter. It’s well known that sea otters enjoy eating sea urchins, which can devastate kelp forests when their populations go unchecked or their predators disappear. Scientists have shown that sea otter introduction and expansion into areas with uncontrolled Pacific purple sea urchin populations can restore balance to the ecosystem, and for this reason they are known as both keystone species and ecosystem engineers.

But Foster and colleagues were curious about the otters’ impact on seagrasses, a less-studied element of their biology.

Hunting drove otters in British Columbia locally extinct by the early 1900s, and all the animals currently found in the province are descendants of 89 sea otters reintroduced between 1969 and 1972 from populations in Alaska. One of the introductions consisted of a group of sea otters from Amchitka Island, which were evacuated prior to a nuclear test conducted there in 1972.

Since then, the British Columbia otter population has grown to roughly 8,000, Watson says, though they still occupy only a little more than half of their original known range in the province.

Eelgrass and other seagrasses can reproduce either clonally or sexually. With the first method, the plants send out rhizomes, or root stalks that produce new plants—not unlike how grass spreads on suburban lawns. But all of the new plants created this way are genetically identical. Research has shown some meadows consist of a single genetic clone, making it overall weaker and more susceptible to disturbance, Watson says.

However, these grasses can also reproduce sexually, via flowering and producing seeds—exactly what the otters encourage with their foraging. This is preferable in the long-term because it creates diverse offspring.

Resilient to change
The enhanced genetic diversity caused by sea otters could make eelgrass more resilient to present and future threats—which, in the case of eelgrass, are many.

Warming and acidification associated with climate change are particularly problematic, since eelgrass meadows are sensitive to changes in temperature and acidity. Such ecosystems are also under assault worldwide due to development, nutrient and fertilizer runoff, siltation, and disruption by dredging or boat anchor dragging. (Read how some seagrasses can fight ocean acidification.)

Brent Hughes, a marine ecologist at Sonoma State University in California, says the impact the otters are having is quite significant, and it’s noteworthy how quickly this effect has become apparent, within the few decades following their reintroduction.

“It’s surprising that it can happen so fast, but also plausible, and I think their data shows that well,” Hughes says.

It’s just another example of how helpful sea otters can be in environments where they live. “Wherever we look at sea otters, the vegetation seems to be really healthy,” he says.

The study also illustrates what can be lost when large animals disappear—for example, “a host of genetic interactions that would be pretty cool to rediscover if we start looking for them,” Foster says.

“The average person thinks of species loss as a sadness because we lost the animal, but we also lose all the interactions that the organism controls,” she says.