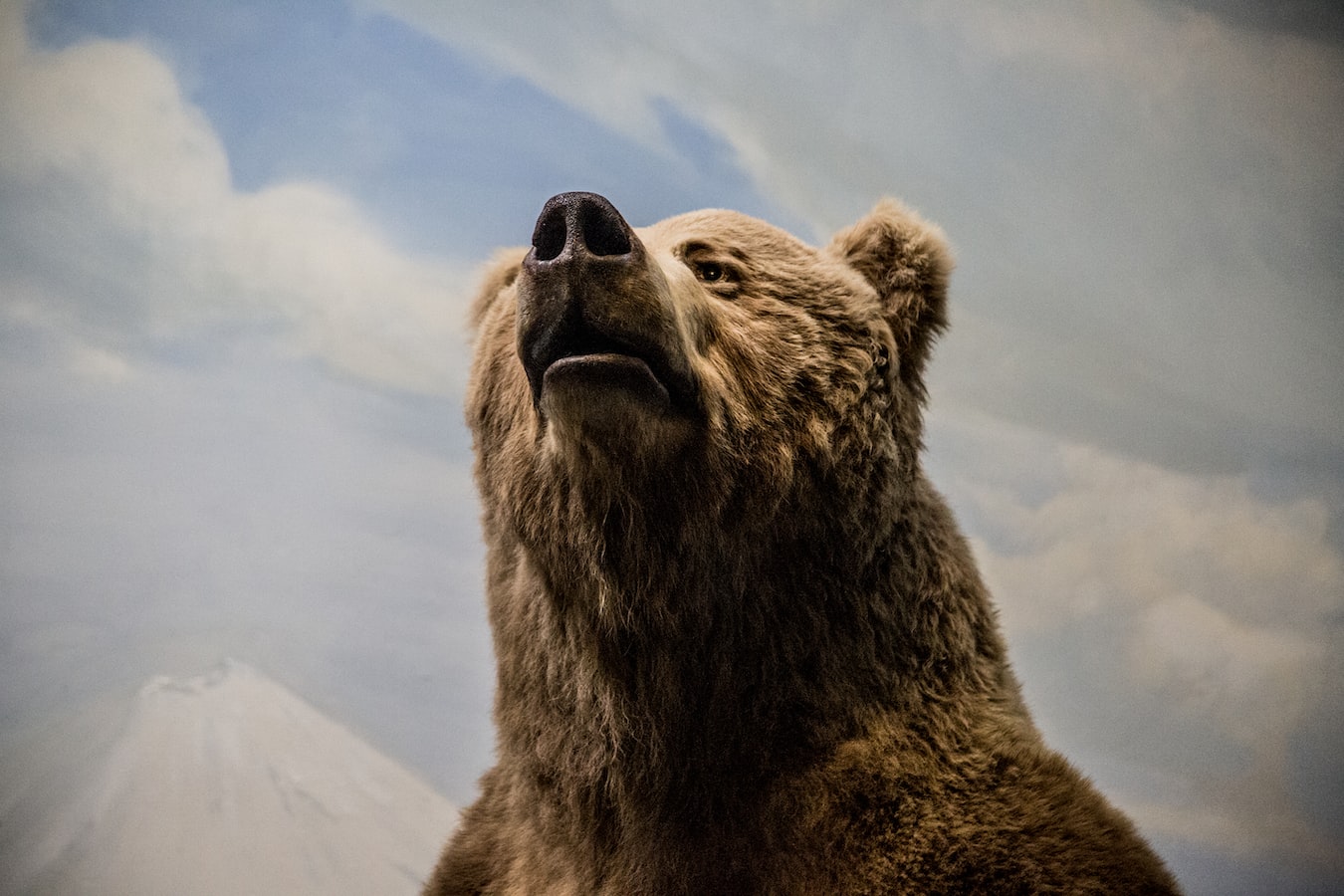 “The real problem described in the article below is that grizzly bears do not fear humans. Limited hunting would change that, greatly reducing bear mortality from human causes by making bears wary of people.

NOTE: this article was originally published to NYTimes.com on February 10, 2020. It was written by Jim Robbins.

Trains, cars and poaching have all contributed to a soaring number of fatalities, prompting fears for the grizzlies’ future.

In 2018, a record number of grizzly bears — 51 — were killed in the Northern Continental Divide Ecosystem, millions of acres in and around Glacier National Park.

ESSEX, Mont. — The long freight trains climb slowly over Marias Pass, through snow-draped mountains south of Glacier National Park and north of the Great Bear Wilderness, snaking through some of the wildest country in the Lower 48.

Some 25 trains a day, each a chain of 90 to 120 cars, make the journey over the Rocky Mountains in northern Montana at speeds up to 25 miles per hour. They have long been a threat to grizzly bears, and last year was the worst with eight of the bears — a federally protected species — run over by trains. On one day in June, a mother and her two cubs were killed by trains in two separate incidents. The long-term average for grizzly deaths by train is two a year.

“A train can sneak up on you,” said John Waller, the supervisory wildlife biologist for Glacier National Park, as he stopped to watch one chug through the forest. “They are amazingly quiet on the down grade and there are a lot of times the sound is blocked, coming in and out of the valleys.”

The death rate of grizzlies in this region has been rising, attributed not only to trains, but to poaching, cars and the removal of troublesome bears. In 2018, a record number — 51 — were killed in the Northern Continental Divide Ecosystem, millions of acres in and around Glacier Park. And last year, 51 bears were killed. In 2017, just 29 bears were killed or euthanized.

At the same time, though, the region’s population of grizzly bears has come roaring back to a high of 1,051 from a low of about 350 to 400, when they were listed in 1975 as a threatened species. Some experts say the increase in mortality is a reflection of the fact that more bears are roaming in far more places than they used to, and argue that, so far, these higher death rates are not a threat to the species.

“We’re still below the threshold that we established to make sure things are sustainable in the long term,” said Cecily Costello, a biologist with the Montana Department of Fish, Wildlife and Parks. “All the data we collect tells us the population is still growing and there’s way more bears on the landscape.”

But if the increase in deaths continues, it could affect the bear’s long-term future, others say, as well as the potential for connectivity between bears in the Greater Yellowstone Ecosystem and Glacier region. A merging of bears from these two wild strongholds is considered critical for the long-term genetic viability of grizzlies in the Lower 48.

State officials convened a meeting last month to advise people how to live alongside the grizzly population, for the safety of both humans and bears.

Higher mortality rates may also play a role in decisions on how the bear population will be managed. David Bernhardt, the interior secretary, visited Montana this fall, when some residents and officials called for removing grizzly bears from the list of threatened species as soon as possible so they could be more readily dealt with if they attacked livestock or threatened people.

In October, five grizzly bears were killed by trains on the Blackfeet reservation adjacent to Glacier Park after a major snowstorm. The bears had been drawn to the carcasses of two cows that had died near the tracks and weren’t promptly reported by the railroad, according to Dan Carney, a bear biologist for the Blackfeet Tribe who is now retired.

Two bears were killed by cars as they crossed a nearby highway and three were killed by trains. “There was a lot of snow, but the railroad should have been more vigilant, certainly,” said Mr. Carney, who helped clean up the aftermath. “After the first bear got hit, red lights should have gone off and they should have removed the carcasses.”

Maia LaSalle, a spokeswoman for BNSF Railway, in a statement that factors like weather, vegetation and distance from the track “can impact the ability to detect and remove carrion.” “When carrion is reported on or along the rail BNSF mobilizes removal equipment as quickly and as safely possible,” she added. “Additionally, BNSF crews are directed to promptly report suspected bear strikes.”

Ms. LaSalle said only three of the eight bears were killed by BNSF trains; the other five were hit by Amtrak trains.

Perhaps the biggest threat to bears here is the expansion of human development in rural lands. Since 1990, some 30,000 homes have been built outside incorporated areas in the Glacier region, according to Dr. Costello, and with them come a range of problems, from chicken coops and beehives that attract bears, to more people hiking and mountain biking in bear habitat, and especially more car traffic.

Transportation corridors are an especially difficult wildlife problem — one researcher calls them “ecological traps.” Bears are drawn to roads or railways because of carcasses of elk or deer killed by trains or cars, the growth of berries in a cleared right of way or the ability to travel unimpeded.

Wildlife crossing structures have helped greatly reduce animal deaths on highways around the world, experts say, though they are not used much on railroads. The Confederated Salish and Kootenai Tribes of Montana have led the country in finding solutions, building 41 underpasses and one large overpass for wildlife to cross safely.

Despite the tribe’s state-of-the-art highway crossings, eight grizzly bears were killed by cars on the reservation in 2018 — including four in one night that didn’t use nearby underpasses. “We’re trying to figure out what’s going on,” said Whisper Camel-Means, a tribal wildlife biologist. “They might need a taller underpass or need an overpass. But when you have females and cubs getting hit, that’s a big deal.”

While there has been a good deal of research in recent years on highway collisions with wildlife and the possible solutions, railroads have not come under the same scientific scrutiny. One notable exception is in Banff and Yoho National Parks. A study found that from 2000 to 2017, there were 14 confirmed grizzly deaths by trains in those parks and as many as seven that were struck but not found.

While not a threat to the species, that’s a significant number for a local population of 60 bears, said Colleen Cassady St. Clair, a conservation biologist at the University of Alberta. “And it’s a huge number in terms of public empathy for grizzly bears,” she said. “No one wants to see grizzly bears get struck by trains anywhere, but especially in national parks.”

Train strikes on all types of wildlife are a growing global problem as rail — a fuel efficient mode of transportation — is expanding. “We have more trains traveling at higher speeds and no one knows what the impacts are,” Dr. St. Clair said. “It’s large and increasing and poorly understood compared to vehicle collisions.”

China, for example, is building thousands of miles of new high speed rail across the country, and other parts of Asia, as well as the Middle East and Europe.

Fast-moving trains can do serious damage.

A recent book, “Railway Ecology,” is an effort to bring what is known about the problem to the forefront.

Researchers in Banff also posit that bears, who are smart about finding abundant food sources along train tracks, can learn quickly to avoid trains, as well. Jonathan Backs, a researcher at the University of Alberta, has been testing a warning device that sets off an alarm when the vibration from an approaching train is detected.

Why Do at Least Half of All Adult Coho Salmon Returning to Urban Streams in the Seattle Area Die Each Fall Before Spawning?