Foodies Can Order Meats From a Single Animal

Consumer demand for wholesome food is the driving force behind sustainable food production.

NOTE: This post initially appeared on WSJ.com on October 5, 2016

Retailers including Whole Foods Market Inc., FreshDirect, andAmazon.com Inc. are building farm-to-store meat operations that sate some consumers’ desires to trace their burger or bacon all the way back to an individual animal.

“They want to know where it came from, where it was born, where it was raised, where it was slaughtered,” said Rick Stein, vice president of fresh foods for the Food Marketing Institute grocery association.

Other retailers, like Honest Beef Co., are supplying cuts directly to consumers, cutting out the meatpacking middlemen and grocery chains in a foodie twist on traditional mail-order businesses like Omaha Steaks International Inc.

Hannah Raudsepp, the 26-year-old founder of Honest Beef, buys cattle directly from her family’s ranch in the Nebraska Sandhills. She pays a small plant nearby to butcher and dry-age them, one at a time. Then Ms. Raudsepp matches online orders with carcasses coming down the line, and ships directly to consumers who order at least $85 worth of steaks and burgers “from one single animal.” 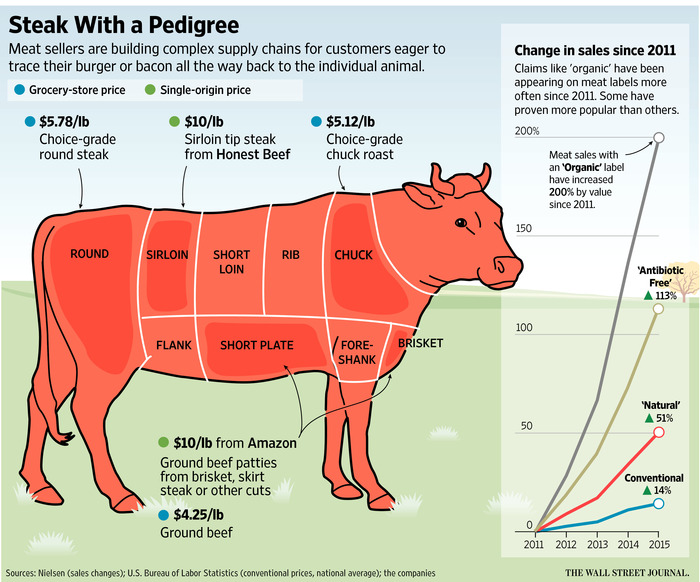 “We’re a beef company with our hand in every step of our short supply chain,” Ms. Raudsepp said.

These efforts take aim at the industrial meat processors like Cargill Inc. and Tyson Foods Inc. that sit at the center of a hub-and-spoke system tying hundreds of thousands of farmers across the country with retailers and food distributors.

There is little chance that single-origin meat sellers like Ms. Raudsepp will soon jeopardize the business of the four companies that buy over 80% of U.S. cattle, and produce around 18 billion pounds of beef annually. Setting up a single-cow supply chain is costly and complex. Sales of meat labeled “minimally processed” totaled $1.3 billion last year. That is a fraction of meat and poultry industry sales worth some $200 billion annually.

Customers must be willing to pay princely sums for these cuts. In addition to its minimum order size, Honest Beef charges around $8.50 a pound for dry-age ground beef. Elsewhere, ground beef prices in August averaged $4.25 a pound nationwide, according to the latest Bureau of Labor Statistics data. Analysts say the single-origin meat sellers are tapping into demand for meat that consumers see as more ethically raised or butchered.

Sales of conventional meat last year grew less than 3% in value, compared with a 12% uptick for meat labeled “natural” and a 23% gain in sales of labeled “antibiotic free,” according to market research firm Nielsen. 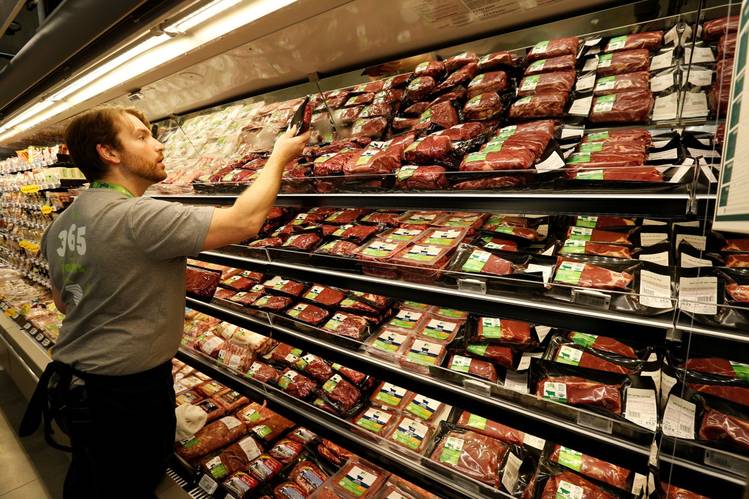 Whole Foods had to invest in farms and slaughter plants to meet the demand. PHOTO:MARIO ANZUONI/REUTERS

“All of these claims are moving up together as part of a growing emphasis on health and wellness” saidMike Olson, associate client director at Nielsen Perishables Group.

Because so few of these farms now exist, Whole Foods had to invest in farms and slaughter plants to meet customer demand for “whole animal” products, said Theo Weening, the retailer’s global meat buyer.

The company bought 20 pigs a week initially from Thompson Farms in Dixie, Ga., several years ago. Whole Foods provided the farm and its processing plant with loans to ramp up production, and now receives 120 hogs each week.

“If it wasn’t for us, they wouldn’t be in business,” Mr. Weening said of the Georgia firm.

Internet retailer Amazon.com in June added “Single Cow” ground beef to its Fresh grocery delivery stores and has since filed a trademark application for the designation. The product, sold in a handful of regions for $10 a pound, is described as being made from a blend of muscle cuts from individual Wagyu cows raised on a California ranch.

Restaurants and supermarkets that grind their beef in-house also could offer “single-source” patties, but most burgers are made from a combination of lean and fatty scraps left over after higher-value cuts like the T-bone are carved up. That means a 1-pound package of store-bought ground beef could contain meat from hundreds of animals.

“A burger made from a single cow isn’t as common as you might think,” said Amazon spokeswoman Nell Rona. The “Single Cow” burger is the only product the e-commerce giant carries exclusively in Fresh stores—out of 500,000 items in some regions—that was developed in partnership with a supplier. Ms. Nell said the company has seen “very high repeat purchase rates” on the burger.

When officials at online grocer FreshDirect began traveling to Pennsylvania and upstate New York to pitch farmers on “disrupting the grocery supply chain,” the idea was met with skepticism, saidStefan Oellinger, the company’s senior buyer for meat and poultry.

“It was another bunch of boys from New York telling [them] what to do,’” said Mr. Oellinger.

Today, the skeptics are falling away. Demand for a cut of a cow offered in its “hyper, hyper local” beef, which the Long Island City, N.Y., company can identify down to the group of steers it bought from a particular farm, has been strong since it made its debut last year, said Mr. Oellinger. He said the company is still deciding how much to put on the market at once.