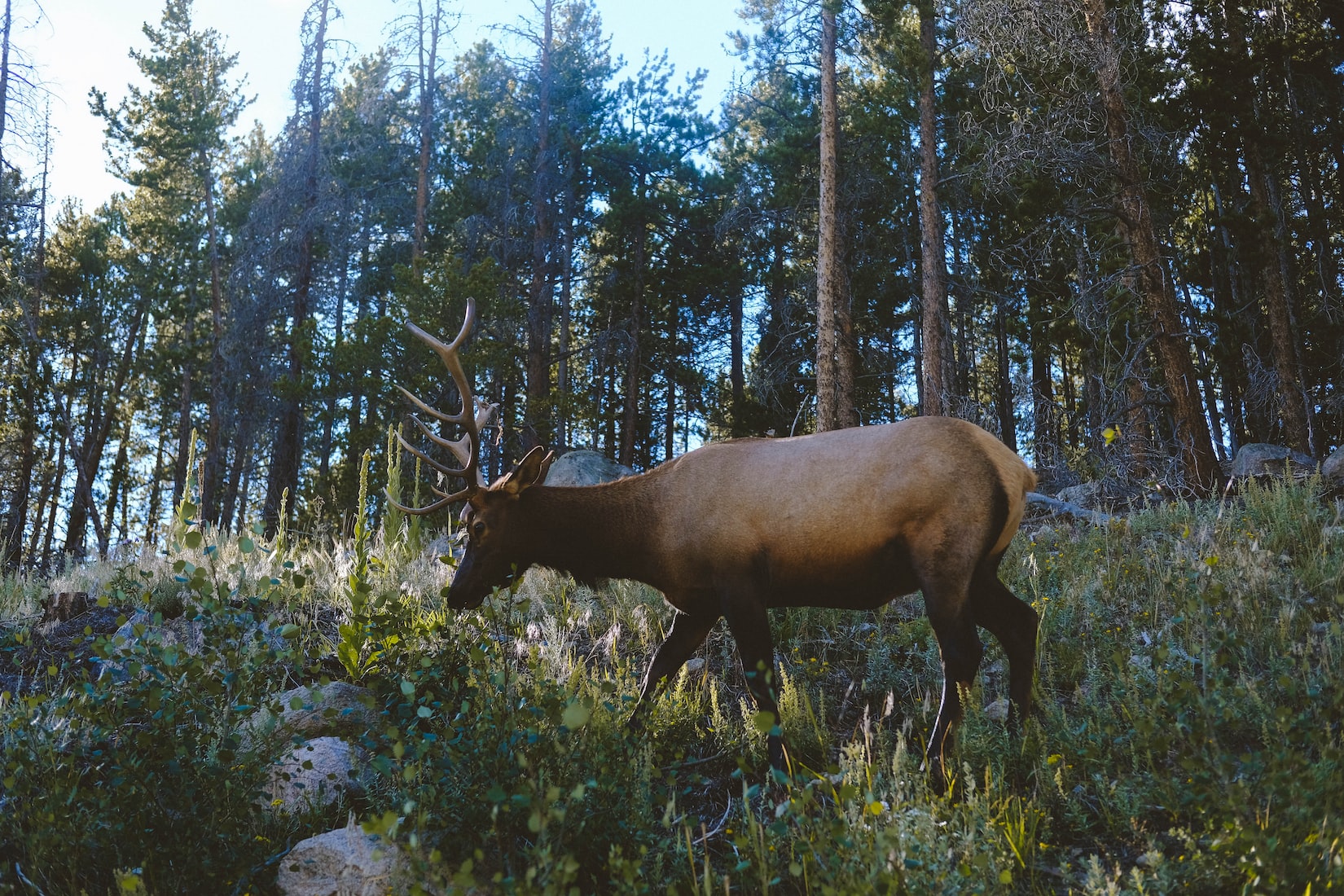 Chronic Wasting Disease (CWD) is a rapidly spreading, invariably-fatal brain disease which is decimating North American deer and elk. It is now found in Yellowstone and Grand Teton’s elk.

In addition, the herds of elk, bison and cattle in and around Yellowstone exist in close proximity and infect each other with brucellosis, a bacterial infection that causes spontaneous abortions, reproductive difficulties and lower productivity in ruminant animals. Brucellosis can be transmitted to humans, where it is known as undulant or Malta fever.

The many sincere and well-intentioned “defenders of wildlife and wildness” who oppose taking steps to control either disease should reconsider. The current Covid pandemic demonstrates once again that animal diseases can transfer to humans with horrible results. Known as zoonosis, disease transmission from animals to humans has happened many times in history. Measles, smallpox, influenza, HIV/AIDS, SARS, and many, many others originated from animals. After transfer, the original illness often mutated into something far worse.

CWD was “created” in a state wildlife experimental station located in Fort Collins, Colorado, where mule deer were being held in close confinement. It was spread by a host of accepted wildlife “management” practices—often conducted and promoted by wildlife agencies—that unnaturally concentrate animals in very high numbers for long periods over infected areas through the use of artificial feed, high fences and predator removals.

Notwithstanding its admirable purposes, elk feeding is a classic example of the above. And, CWD is yet another unintended consequence of what happens when we do not think holistically.

Declining forest and wildlife health, and catastrophic wildfire, are symptoms of a broken management system. Although the actions that led to these failures tried to meet our needs, desires and address problems, they failed because,

1.  First, they missed a simple yet powerful insight: Everything alive is connected, and therefore anything done –  or not done  –  within an ecological system affects every living thing, and every part of the system.

2. And second, while decision makers have always chosen between economic, or social, or environmental outcomes according to their priorities, none have given all three equal importance at all times, nor done so within the context of the first insight.

When every decision maker always considers all of the above, we will at last be managing “holistically”. Managing forests and their animals holistically may not change our objectives, goals, missions or visions. But it will transform our actions, including our response to CWD and other diseases of elk.

NOTE: this article was originally published to JHNewsandGuide.com on December 18, 2020. It was written by Mike Koshmrl.

First wapiti in far Northwest Wyoming to test positive for CWD was killed by a hunter in Grand Teton National Park.

Lethal, incurable chronic wasting disease has been discovered for the first time in an elk that dwells in the region of the state where the ungulates concentrate most tightly on winter feedgrounds.

The dire confirmation of a prion disease among the ranks of feedground elk comes from a cow killed just a few miles from where alfalfa pellets are lined out on the National Elk Refuge. The cow was shot by a hunter Dec. 2 in Grand Teton National Park. A lymph node near its throat was extracted by a park technician, and two weeks later the Wyoming Wildlife Health Laboratory got a positive hit.

On Wednesday a second test confirmed the elk was the first CWD-positive elk among the nearly 20,000 animals that gather annually on 23 state and federal feedgrounds.

“This is not going to be good, that’s my gut feeling,” Wildlife Disease Supervisor Hank Edwards told the Jackson Hole Daily. “How bad it’s going to be? I don’t know.”

The positive test marks a new era in elk management in western Wyoming, where the Wyoming Game and Fish Department is, for now, continuing to feed elk on a landscape that is known to harbor the lethal, degenerative sickness many fear will soon drive down the elk population.

Chronic wasting disease, often called CWD, can infect cervids like deer, caribou, elk and moose. It has been spreading steadily since it was first detected in southeastern Wyoming more than four decades ago. It has now been confirmed in 26 states and two Canadian provinces.

Always fatal, CWD is spread by a misfolded protein called a prion, which can persist in the soil and environment for over 16 years in a variety of the disease that exists in sheep, called scrapie.

CWD has been discovered in the region in the past in mule deer and moose. In the fall of 2018, a mule deer tested positive in Grand Teton National Park, and infected mule deer have been detected near Pinedale, Star Valley and in the Wyoming Range.

Before this week’s news, the nearest known CWD-positive elk was east of Cody, in hunt unit 66, though the crossing of the species barrier from deer to elk in the Jackson Hole area was not a surprise to wildlife officials like Game and Fish Regional Supervisor Brad Hovinga.

“We’ve been speculating when it would arrive for a long time,” Hovinga said. “It’s extremely difficult to predict.”

It’s unknown how fast CWD will progress through fed elk populations in Jackson Hole and elsewhere in the southern Greater Yellowstone Ecosystem, though wildlife scientists have modeled to try to predict what will happen.

Peer-reviewed research focused on the Jackson Elk Herd, led by Colorado State University ecologist Tom Hobbs in collaboration with a Game and Fish employee, predicts prevalence will reach 10% within five years of CWD’s arrival. That is a grim forecast for elk hunters, because the same study forecasts that the population will begin a decline once prevalence in cows reaches 7% — that with a complete absence of cow elk hunting.

Those predictions are more dire than in Rocky Mountain National Park, where CWD has been around for years among its unfed elk. There, populations decline once prevalence tops 13%.

It was Edwards, the state disease specialist, who made the phone call to the hunter whose cow, killed in Grand Teton National Park, tested positive. The man, he recalled, was both “very bummed out” and surprised.

The Centers for Disease Control and Prevention and World Health Organization advise hunters to not consume any animal that tests positive for CWD. There has never been a confirmed instance of CWD crossing over to a human, though a prion disease in bovids — mad cow disease — has crossed over and killed people, and laboratory tests have found that monkeys can contract CWD by eating infected meat, suggesting there is no absolute barrier to primates.

The organized mass feeding of elk in Jackson Hole is a management tactic that is over a century old. It originated after a series of severe winters as a way to keep wapiti alive. Elk feeding has persisted to prop up populations, keep elk off private land and prevent the spread of brucellosis to cattle, but the practice of feeding wild ungulates is also widely condemned, particularly because of its propensity to spread disease.

Some feeding critics aren’t pleased that federal and state agencies are planning to continue business-as-usual elk feeding in the months ahead.

“We know what’s going to happen,” Connie Wilbert, the Sierra Club’s Wyoming Chapter director, told the Jackson Hole Daily. “The idea that they’re going to be feeding this coming winter is crazy and totally insane. If this isn’t a wake-up call, I don’t know what is.”

While there are major divisions over how to respond to the arrival of CWD, its inevitable spread is accepted by almost all. Sy Gilliland, who leads the Wyoming Outfitters and Guides Association, said it’s only a matter of time before the lethal sickness is commonplace in Jackson Hole and other parts of the feedground region.

“It would be a fool’s errand to think that it’s not going to go through all the big game units in Wyoming, eventually,” he said. “Anybody who’s dealt with it knows that.”

Gilliland said he supports the approach Wyoming wildlife managers are taking to address CWD’s effect on feedground elk. The Game and Fish Department recently updated its CWD management plan, but ahead of time made the call to piece out the issue of elk feeding from that plan. Instead, a separate process geared to address CWD on feedgrounds has been launched. That effort began last month, and comments about what to do are currently being accepted.

In the meantime, feeding nearly 20,000 elk will continue this winter, albeit with some tweaks. Surveillance will increase, and elk exhibiting signs of CWD, such as listlessness, will be promptly culled and their carcasses hauled away from state-run feedgrounds, Hovinga said.

The federal National Elk Refuge also is incrementally changing its feeding program for now, rather than pursuing wholesale change.

“Obviously it’s extremely concerning to me that it has made its way into the Jackson Elk Herd,” Refuge Manager Frank Durbian said. “It wasn’t a matter of ‘if’ — it was a matter of ‘when’ — and unfortunately we just got our answer to ‘when.’”