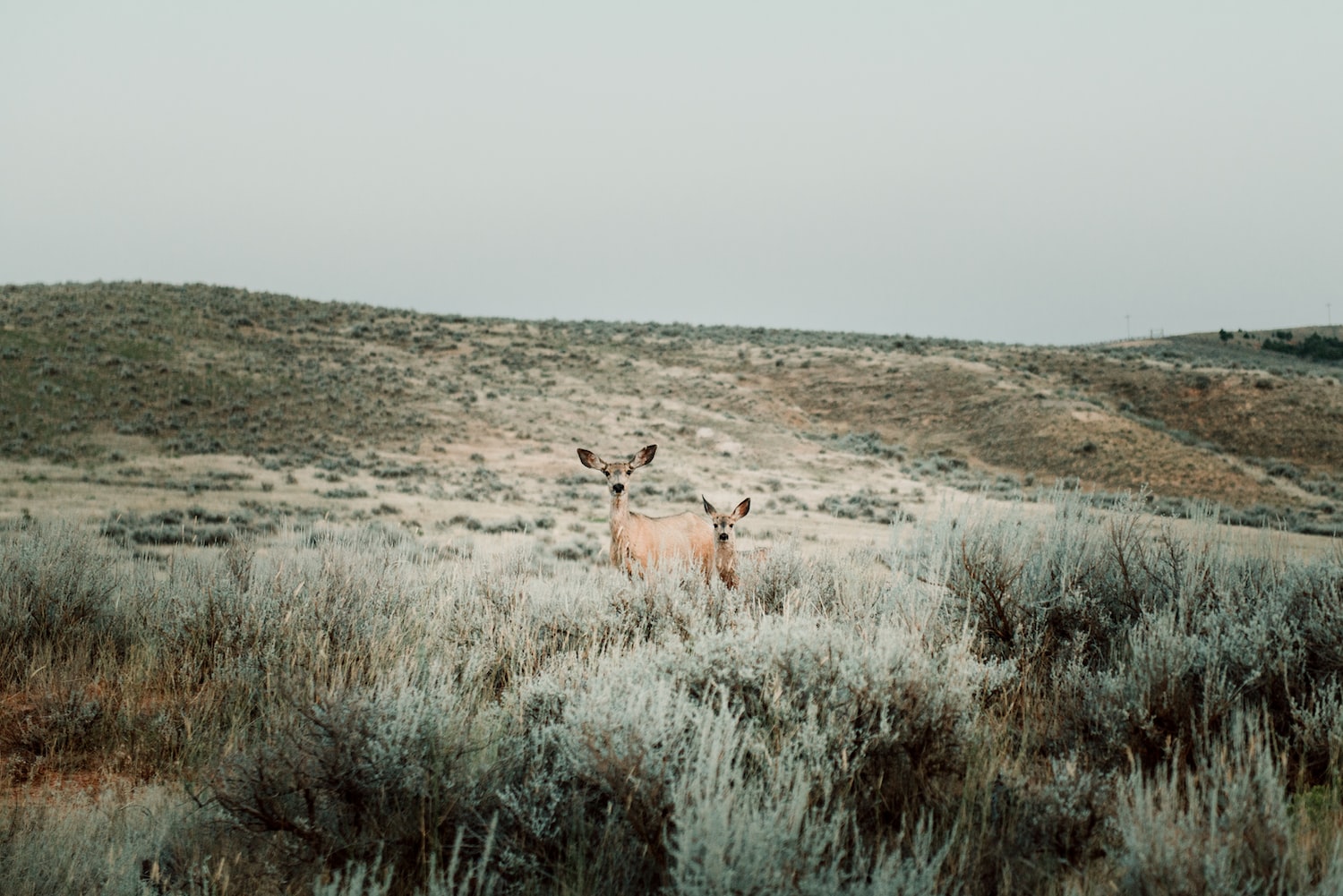 The 2021 campaign of the feds’ seemingly endless war on wildlife is described in the article below. 100-plus years into the misadventure of government funded predator removals the historian’s observation seems appropriate: “They had learnt nothing and forgotten nothing.“

The managers quoted below say their eradications help ranchers. While a majority of ranchers, and many agency personnel may believe this, they are mistaken to put it mildly that eradicating coyotes is helpful to wildlife and habitat – or for that matter even possible.

Why have coyote numbers exploded? Because we have taken out the wolves which formerly controlled coyotes. Absent wolves, it is well-established that the more you kill coyotes, the faster they breed. Biologists conclude you would need to kill 75% of all coyotes every single year for 50-years to achieve even a momentary regional population reduction.

The wasted cost of the eradications is exceeded only by the scale of its failure. After 100-years of wolf and coyote eradications there are more coyotes alive than ever before in history and now they are found across the continent, whereas before government funded wolf and predator eradications, coyotes were only desert animals.

A fine book on the subject of the federal government’s attempt to eradicate the coyote is Dan Flores’ “Coyote America: A Natural and Supernatural History, reviewed here.

NOTE: this article was originally published to JHNewsandGuide.com on January 25, 2021. It was written by Mike Koshmrl.

A branch of the U.S. Department of Agriculture tasked with killing coyotes, foxes, jackrabbits and other “nuisance wildlife” in the Equality State has completed a years long planning process and will continue its business-as-usual lethal methods. 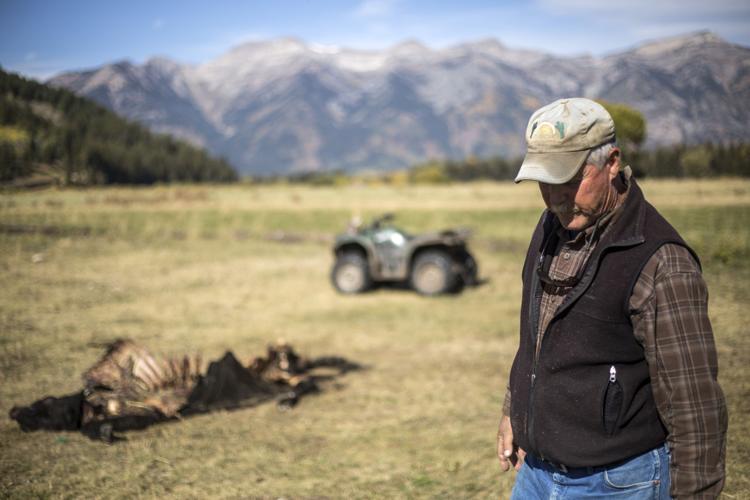 Retired Walton Ranch cowboy Terry Schramm shows a cow that was attacked by wolves near Spring Gulch Road in 2016. The federal agency that responded to the conflict and killed wolves to stem the problem, the U.S. Department of Agriculture’s Wildlife Services program, will continue with its status-quo lethal operations into the future.

The USDA program Wildlife Services had been sued by environmental groups for relying on outdated science and going more than two decades without analyzing the environmental effects of its operations. In 2019, federal attorneys agreed to a settlement that required final Wyoming operating plans no later than Jan. 8, 2021, a deadline that the agency made good on during the closing days of last year. Keith Wehner, Wildlife Services’ Western Region Director, signed off on a “finding of no significant impact” document that OK’d taking “no action,” which is to say continuing the status quo.

Out of four alternatives considered, the status quo was considered the option that best met Wildlife Services’ “purpose and need” to reduce conflicts with predators that prey on or harass livestock and wildlife, damage other agricultural assets, impact wildlife, and threaten human health and safety. Other alternatives weighed included ceasing operations, only responding correctively when wildlife caused damage and providing only technical assistance.

Wildlife Services did not allow a verbal interview for this story and responded to most emailed questions by citing sections of the documents that were released in conjunction with the agency’s decision.

A 294-page environmental assessment was among those documents, and it outlines the species-by-species damage that Wildlife Services’ field staff are able to confirm in a typical year. The most injurious species, by far, to Wyoming’s farmers and ranchers is the coyote, which caused an estimated $132,000 in damage annually over a recent 5-year period — 71% of the total damage assessed.

Canis latrans, in turn, is on the receiving end of the brunt of Wildlife Services’ lethal operations. From aircraft and on the ground, some 6,333 coyotes were killed on average by Wildlife Services agents annually over a recent 5-year period, which equates to about 9% of the statewide population. In its environmental assessment, Wildlife Services anticipates an increase in its kill of coyotes: up to 15,000 animals plus another 400 dens, which is a toll the agency says will have “minor short-term” impacts on coyotes locally and “no impact” on statewide numbers.

When it settled with the Center for Biological Diversity in August of 2019, Wildlife Services agreed to interim changes to its operations, such as a statewide prohibition against “quick-kill” conibear-style traps and using only breakaway neck snares that release larger non-target animals.

Other measures included a ban of a cyanide-propellant device called an M-44 on National Park Service and U.S. Forest Service lands, and an end to aerial gunning in wilderness and wilderness study areas.

Wildlife Services did not continue any of these prohibitions in its operations going forward, which was to the disappointment of Center for Biological Diversity senior attorney Collette Adkins.

“We had hoped that some of those measures would become the new baseline for the agency,” Adkins said. “But that did not happen. They chose the alternative that maintains what they’ve always had, and they explicitly talk about how they’ll continue to use M-44s.”

Forty-seven comments were submitted to Wildlife Services when plans for its Wyoming operations were in the draft phase. In response, the agency tweaked its language about trapping best-practices and placement and notice of M-44s, but the public feedback had little effect on how the agency operates.

“It’s incredibly frustrating to see them turn a blind eye to all the public comment that asked for a more science-based and humane approach going forward,” Adkins said.

Center for Biological Diversity is not continuing to challenge Wildlife Services’ Wyoming operations, but the organization will be turning its attention to federal legislation, she said.

Wyoming Stock Growers Association president Jim Magagna’s concerns with Wildlife Services have less to do with its policies and more to do with funding.

“Their capacity has been reduced,” Magagna said. “They haven’t had the funding to maintain the same level of services on a statewide basis that they have historically.

“I hear second-hand that some of the predator boards have felt that the level of service that Wildlife Services is providing was not as effective or adequate as it’s been in the past,” he said, “so they’ve turned to looking other places for assistance.”

Roughly two-thirds of the agency’s budget for Wyoming comes from cooperators like the State of Wyoming, county-level predator boards and livestock producers, state director Mike Foster said in an email.

Teton County does not have any agreement in place for predator management, though the agency does periodically operate here at the request of the Wyoming Game and Fish Department, typically in response to wolf conflict.