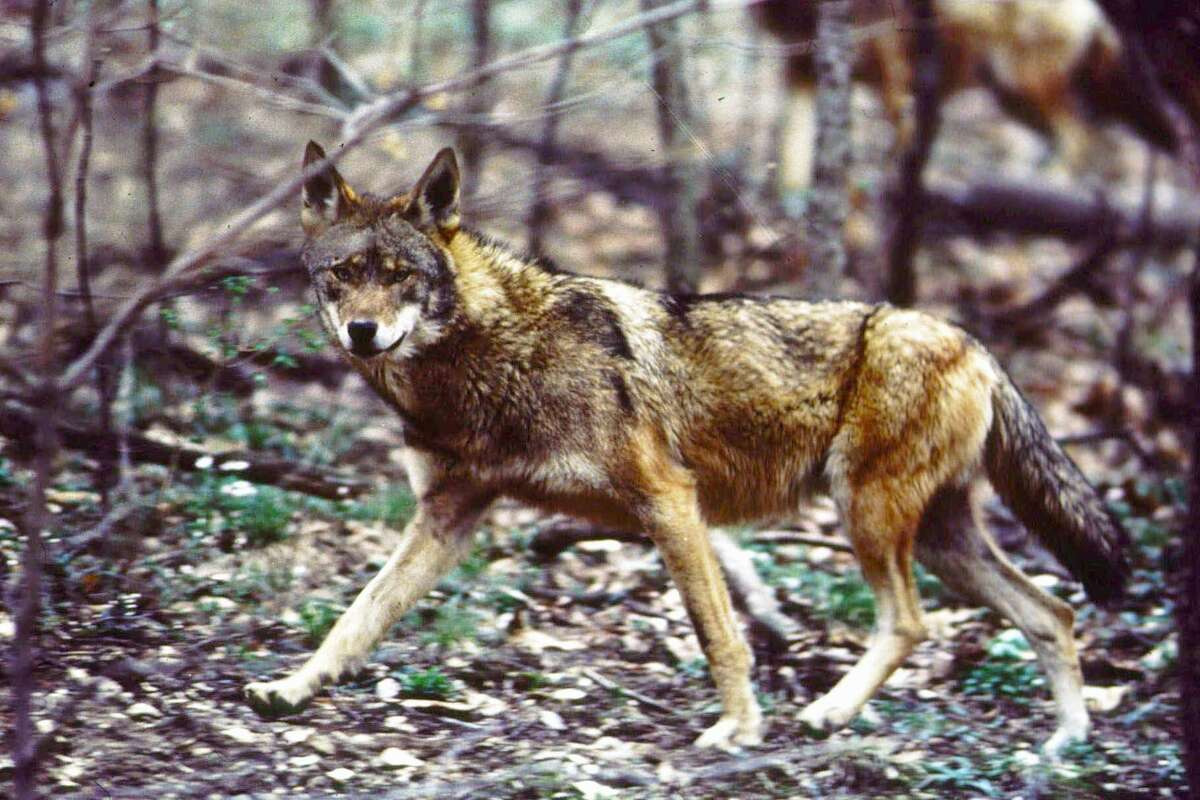 More on the “discovery” of Red Wolves in Texas.

The real hero is “Wil E. Coyote,” the indomitable little wolf of our Southwestern deserts. Taking a cue from “The Roadrunner,” his cartoon adversary, the coyote has run circles around the “conservation” scientists and their publicly funded, 100-year eradication campaign. The eradication campaign’s waste is exceeded only by its spectacular failure.

This story begins as all the Native American coyote stories do: “Coyote was going along when…” Coyote encountered the lady wolves. They married  and created a new species.

NOTE: this article was originally published to HoustonChronicle.co on January 19, 2019. It was written by Shannon Tompkins.

The voice came across a seamless night sky, travelling to our ears from maybe a half-mile away, where an unseen chenier stood a couple of feet higher than the sea of coastal marsh and prairie surrounding it. The sound was nothing like the short series of high-pitched, modulating canine yips and warbles we’d heard and recorded at earlier stops when we cranked an alarm siren carried in the back of the pickup roaming backroads and muddy tracks in a corner of southwest Louisiana.

This was a low, powerful, unwavering moan, piercing the darkness and the most primitive part of my brain for what simultaneously seemed forever and only a moment.

Then it was gone.

“That didn’t sound like a coyote,” I remember someone among the small group clustered around the truck’s tailgate that night 45 years ago saying.

“Red wolf?” someone else whispered.

“Maybe,” said the leader of the group, a mix of experienced wildlife scientists, graduate students and one lowly undergrad, who had talked his way into being allowed to tag along on.

The nighttime “siren survey” operations in the mid-1970s were aimed at trying to map locations that potentially might hold remaining pockets of red wolves. Using the siren to trigger vocal responses, researchers recorded the howls and noted the location of vocalizations that sounded like they came from what might be red wolves.

Mostly, we heard coyotes. Or, sometimes, what sounded like feral dogs or some jambalaya mix of canine howls. But occasionally the siren would trigger a response that was so distinctive and so primeval and just plain powerful that it obviously was from some creature very different from the others.

The locations where those low, long and, yes, mournful howls were noted were marked as locations for traps aimed at capturing wild canids alive. Red wolves were the target, and the trapping was part of a desperate effort to collect and try to save what few of the animals remained.

Most figured it was already too late for that.

Once a major player in the natural world stretching across the Southeast from eastern Texas to the Carolinas and maybe beyond, red wolves were in dire straits. Long persecuted, shot, trapped, poisoned and their habitat and food base evaporated or so altered that it could not support them, red wolves had by the late 1960s seen their range and number shrink to near nothing.

Red wolves’ final stronghold — and it hardly seemed a stronghold — were the marshes and prairies, woodlands and oak-studded cheniers in the far southwest corner of Louisiana and Southeast Texas.

The wolves were, in 1973, offered protection from indiscriminate killing when they were declared an endangered species under federal law. But red wolves faced a problem that seemed even more perilous to their species’ survival than the one poised by humans — coyotes.

For millennia, red wolves had owned the Southeast’s wildlands. At 45-80 pounds, long-legged, standing 27-30 inches at the shoulder with a wide face and snout, red wolves were smaller than their gray wolf relatives to the north and west. But they were as much as half-again the size of the coyotes whose native range abutted the red wolves’ in places such as Central Texas. Where red wolves’ ruled, coyotes feared to tread.

Evidence indicates red wolves and coyotes maintained their distinct and separate ranges, overlapping only at the edges, until the red wolf population began shrinking under relentless human persecution.

That threat was behind the efforts in the 1970s to locate, capture and remove from the wild as many pure-strain red wolves as possible from the heart of the wolves’ remaining population, then limited to a couple of parishes in southwest Louisiana and three or four counties in the southeast corner of Texas.

Between 1973 and 1980s, about 400 wild canids were captured from those areas. Of those, 43 met morphological standards set for pure red wolves. Breeding experiments whittled that number to just 14.

Those 14 red wolves became the heart of a captive-breeding program that eventually saw an experimental red wolf population established in coastal North Carolina, where that population currently struggles to survive, beset by the same forces of hybridization with coyotes and human-caused mortality.

Any remaining pure-strain red wolves in Texas and Louisiana were figured to be doomed to being hybridized out of existence. In 1980, the red wolf was declared to be extinct in the wild. A rich piece of the nation’s natural history written off as forever gone.

But that may not be the case.

Over the last 40 years, reports of sightings of wild canids with red wolf physical characteristics and behaviors have come from the wolves’ old stronghold in southwest Louisiana and Southeast Texas. But hard, scientifically defensible evidence that red wolves, or something more like them than the coyotes that had replaced them, remain on the landscape has been absent.

That has changed with the publication lastmonth of a pair of studies focusing on the genetics of wild canids living in red wolves’ old home grounds.

One of the studies — “Rediscovery of Red Wolf Ghost Alleles in a Canid Population Along the American Gulf Coast” — published in the journal Genes, involved genetic testing of two road-killed wild canids from a population on Galveston Island, comparing their DNA to that of coyotes, gray wolves and captive red wolves from the “rescued” population collected in the 1970s.

The results show the Galveston Island canids share considerably more genetic material with the captive red wolves than with coyotes or other canids. The DNA work also showed the Galveston canids carry genetic material found only in red wolves but not found in the red wolf population descended from the original 14 animals captured in the 1970s. These “ghost alleles” suggest the canids have ancestry from other lines of pure red wolves.

“It’s really pretty incredible to know these animals are a reservoir of red wolf DNA,” said Ron Wooten, Galveston resident and trained biologist who has watched and photographed the pack of canids and submitted the tissue samples for the study. The animals, he said, have physical characteristics of red wolves — broad face with thick snout and nose, long ears — as well as behaviors different from coyotes.

“You can tell they are something different,” Wooten said.

The other study also offers evidence that some wild canids in southwest Louisiana carry significant amounts of red wolf DNA. The study, published in the journal Conservation Letters, involved genetic testing of 54 scat samples and 16 hair samples collected from southwest Louisiana in late 2015 and early 2016. That testing identified the scat and hair as coming from 32 individual canids.

Researchers conducted genetic testing on those samples as well as 90 coyotes from Alabama, Georgia, Kentucky, eastern Louisiana and Mississippi. The results showed 19 of the canids from southwest Louisiana had at least 10 percent red wolf mitochondrial or nuclear DNA. Several had higher percentages, including at least three with DNA makeup that suggested they could be F1 hybrids — half red wolf, half coyote. And one animal had 78-100 percent red wolf ancestry.

The two studies suggest that, 40 years after red wolves were declared functionally extinct in the wild, the genetic ancestry of those wolves persists, sometimes in significant amounts, in the wild canids living in some pockets of the wolves’ former range.

The significance of these findings can and will be discussed and argued. Red wolves long have been a contentious subject. This is especially true among scientists, where there is with no consensus on whether the red wolf is a species unto itself, a subspecies of gray wolf, a subspecies of coyote or something else.

But the evidence suggests red wolves, perhaps through some combination of biology, behavior, isolation from coyotes or other factors, have been able to maintain and pass along considerable amounts of their genetic identity in the face of considerable challenges.

That means red wolves, or a wild canid very much like red wolves, still walk the species’ ancestral homeland where they belong, and still offer low, long, powerful howls declaring their presence to the night sky.