CREOSOTE BUSH (Larrea tridentata) is generally misunderstood as an invader plant.  In fact creosote is a symptom –  but not the cause –  of dying desert grasslands. Creosote will predominate as grasslands decline but eventually it also dies. 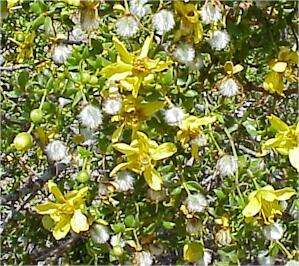 Creosote bush is one of the most common and important plants of the warm deserts (Sonoran, Chihuahuan and Mojave Deserts) of North America, but cold winters exclude it from the Great Basin Desert. Four closely related species also are found in South America (Southern Peru. Bolivia and Argentina), which is the region where creosote bush originated and from which it spread to North America at some time during the Pleistocene (from 1 million to 10,000 years ago). Today, it is often the dominant plant over miles of dry, low-lying, flat terrain where rainfall averages as little as 8-10 cm per year (images 2, 3). It looks remarkably similar wherever it occurs. But this belies the fact that it actually exists as three distinct populations. In South America and the Chihuahuan Desert of North America the plants are diploid (with two sets of chromosomes in each nucleus), whereas in the Sonoran Desert they are tetraploid (4 sets of chromosomes) and in the Mojave Desert they are hexaploid (6 sets). 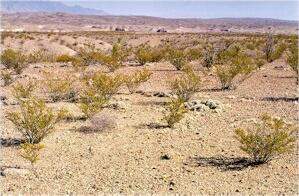 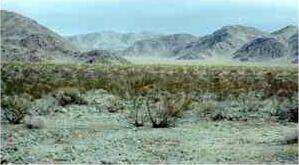 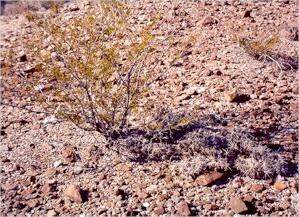 4. A single creosote bush, in the shade of which (right-hand side) is a clump of the grey, spreading, mat-forming cactus termed clavellina (Opuntia schottii) The cylindrical stems of this plant – a cholla similar to the large, erect chollas) grow to only about 10 cm high. Many cacti in deserts grow in the shade of shrubs, to minimise exposure to intense sunlight.

Creosote bush is the most drought-tolerant perennial plant of North America. It can live for at least 2 years with no water at all, by shedding its leaves and even shedding branches. But usually it is an evergreen plant, retaining its thick, green, resin-coated leaves (image 5) or allowing them to dry down and turn golden-brown in periods of seasonal drought (image 6). In this condition the leaves can still synthesise some sugars – enough to keep the plants alive. The extreme drought-tolerance of the leaves is due to several factors: the leaves are small with a low surface area for water loss (image 7), the leaf cuticle is very thick and waxy, and the high stomatal resistance. Coupled with all this, the tissues of the leaves can have very high water potentials, caused by high levels of chemicals, so they can withstand drought conditions.

Creosote bush is also remarkable for several other reasons. The individual plants live an extremely long time – often 100-200 years. And they produce clonal colonies (all plants having the same genetic make-up). This happens over a period of many centuries, as new shoots are continually produced from the outer edge of the root crown, and the older stems die in the centre of the bush. The result is that these plants gradually move outwards in a circle and then become separate plants, all derived from the original one. In contrast to this, the seeds which are produced quite abundantly by creosote bushes (image 1) germinate poorly and the seedlings show very low survival in natural environments.

In almost any area dominated by creosote bush the plants are seen to be spaced with a remarkable degree of uniformity (image 2). This has given rise to speculation that the roots secrete alleopathic chemicals – those that might inhibit the growth of nearby plants. Although there is some evidence of this, it is more likely that the plant spacing reflects the availability of water. Creosote bushes have extensive fibrous root systems, typically extending up to 4 metres from the plants. Most of these roots are shallow, to intercept any water that falls on the soil surface, but in deep sandy soils the plants can also produce tap roots to obtain water from deeper in the soil profile. 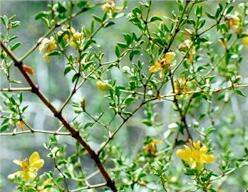 7..The tiny leaves, each with two leaflets, resemble the cloved hoof of a deer

Creosote bush gains it name from the resinous odour of the leaves. In fact, these plants are natural chemical factories – they produce a wide range of compounds that protect them from damage by insects and pathogenic fungi and that also prevent them from being eaten by herbivores. For example, an anti-oxidant compound termed nordihydroguiaretic acid (NGDA) is present on the leaf surfaces and can account for 5-10% of the total weight of the leaves. This and other resinous phenolic compounds can form complexes with proteins and prevent digestion of the leaf tissues in an animal’s gut. Jackrabbits are the only mammals known to eat the leaves of this plant – and then only in times when little else is available. There are, however, more than 60 insects associated with creosote bush, including 22 species of bee that feed only on its flowers, and a creosote katydid and creosote grasshopper that are specialised to use it as a food source. 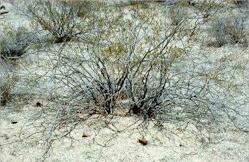 The soil mounds around creosote bushes are favourite places for the burrows of desert rodents, including kangaroo rats (image 8). When rodents abandon these burrows they become occupied by lizards and invertebrates.

The vast tracts of land dominated by creosote bush have almost no commercial value for recreation or grazing of livestock. In recent years the creation of irrigation canals, drawing water from the major rivers of the southwestern USA and northern Mexico, have led to the ploughing up of large areas of this “natural wasteland” for commercial irrigated agriculture.

The belief that degraded grasslands have no value for recreation or grazing is as incorrect as it is widely-accepted. Below is an 11-minute video on a fast, cheap, effective way to restore these dying grasslands in which creosote bush is the last survivor. This restoration of grass and weeds does no harm to creosote or the many creatures and other plants that depend on it.

Desert Grassland Restoration Without Poisons from Christopher Gill on Vimeo