Returning large grazers to grassland is a basic requirement to reverse desertification. This is an environmental research project worth funding.

NOTE: This post initially appeared on WSJ.com on September 20, 2016

Cowboys are adding algorithms to their saddle bags.

Drugmakers, startups and cattlemen are betting that sensors and data-sifting software can help keep cattle in Western U.S. feedlots healthier than cowboys can alone. New tags clipped to animals’ ears aim to monitor movement and feeding patterns for early signs of sickness.

With low cattle prices pinching ranchers’ profits, developers believe they can save feedlots money on drugs like antibiotics and avoid treating healthy cattle. The tactic also appeals to some health officials and consumers who say antibiotics are overused.

Startups like Southfork Solutions Inc., Precision Animal Solutions LLC, Quantified Ag and GrowSafe Systems Ltd. are jockeying to get their sensors and tags into cattle pens, seeking to carry a data revolution in U.S. agriculture into livestock operations.

Animal pharmaceutical companies like New Jersey-based Zoetis Inc.also see the technology as a way to diversify as restaurants and food companies push to reduce the level of antibiotics used in meat production. Food regulators also have sought to curb some uses of the drugs.

The widespread use of antibiotics to raise chickens, hogs and cattle has drawn criticism from government and consumer groups who say it hastens the development of hardier bacteria, putting human health at risk.

Developers say their monitoring systems can reduce medication costs by about 15% per animal and save more sick cattle from death. But longtime cattle hands remain leery that a computer program could tell them more about a steer than they can glean from horseback.

David Sjeklocha, who helps oversee about 240,000 cattle as operations manager of animal health for Kansas-based Cattle Empire LLC feedlots, had to persuade one cautious cowboy to stick to recommendations provided by Southfork, an Idaho-based developer of cattle sensors.

Southfork’s system monitors the trips steers and heifers make to the feed trough for signs they aren’t eating enough and might be getting sick.

Early in a pilot that began in late 2013, one cowpoke thought Southfork’s system was missing some sick animals and called Mr. Sjeklocha from horseback: “He said ‘Doc, this ain’t right, if these cattle are sick, they need to come out,’ ” said Mr. Sjeklocha, who holds a doctorate in veterinary medicine.

Mr. Sjeklocha persuaded him to follow Southfork’s system. Out of the 12 animals the cowboy wanted treated, only two wound up being ill; Cattle Empire saved money on labor and unneeded pharmaceuticals.

Quantified Ag, which analyzes animals’ mobility and temperature, invested more than $1 million to develop its system and currently charges around $18 an animal for the service, according to Vishal Singh, chief executive of the Lincoln, Neb.-based company.

Southfork and Precision Animal Solutions are testing their systems ahead of wide-scale commercial release, and have yet to settle on pricing. Officials say the savings on drugs and labor could be meaningful as feedlots face immense profit pressure. 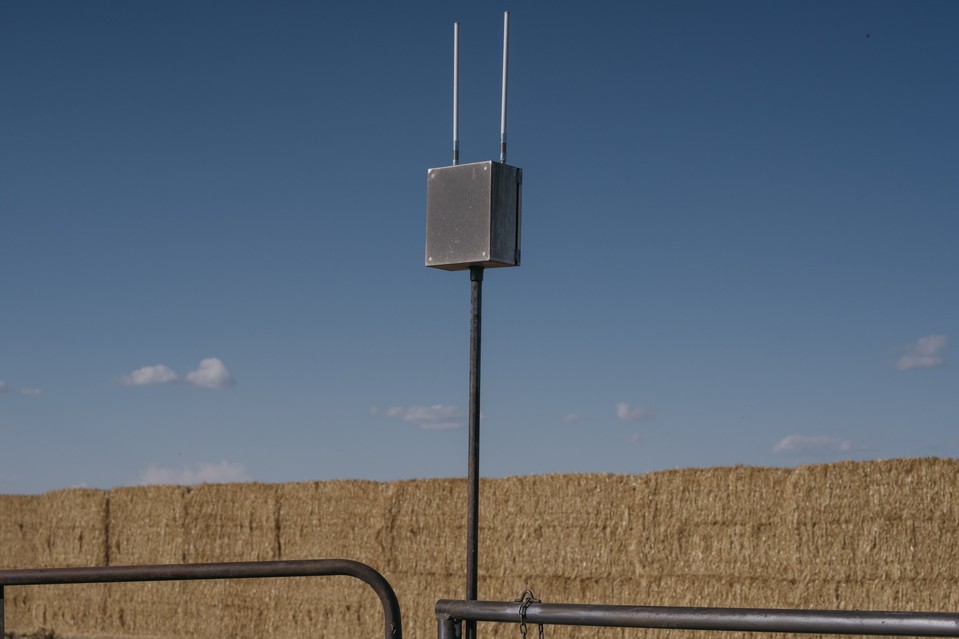 Above, the antenna used to transmit information on livestock sits in the corner of a feedlot at the Johnson Livestock feedlot in Idaho Falls, Idaho. 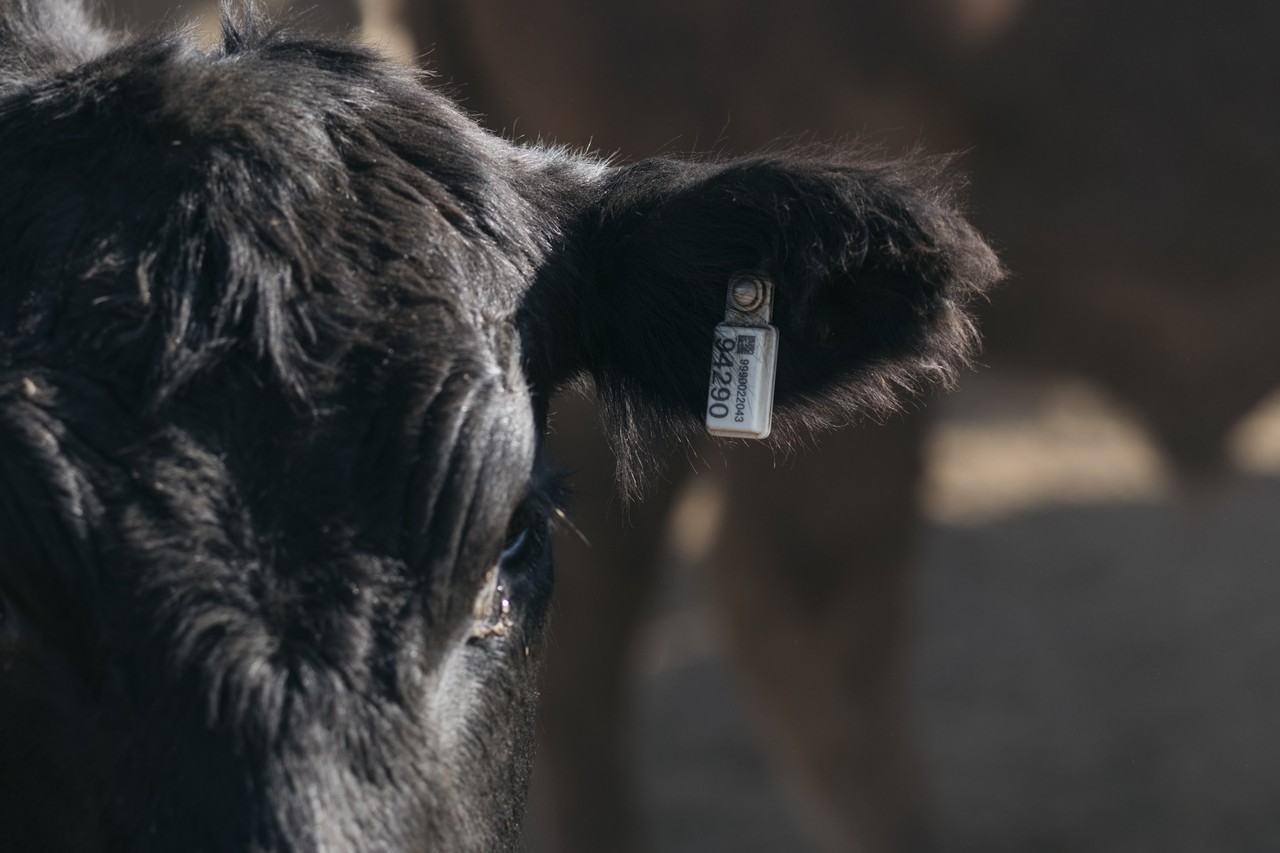 A high-tech ear tag on an animal at the Johnson Livestock feedlot in Idaho Falls, Idaho, earlier this month. 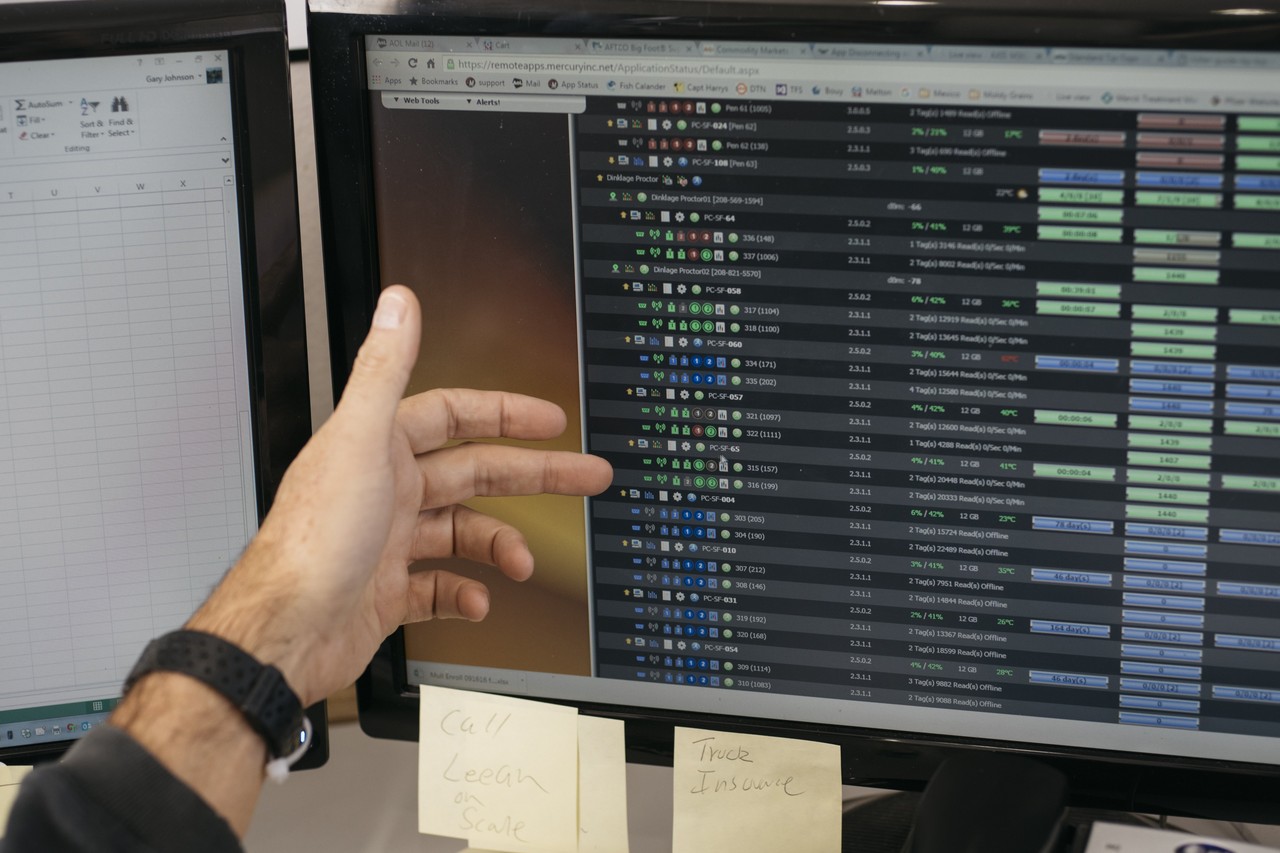 Rapid expansion in the U.S. cattle herd has sliced wholesale beef prices by 17% over trailing 12 months and caused the average feedlot to lose a record $307 an animal in 2015, according to estimates from data provider Livestock Marketing Information Center. U.S. feedlots are on track to lose about $90 an animal this year. Those estimates don’t include financial hedging strategies or the use of growth-promoting feed additives, which can improve profitability.

Zoetis, the world’s largest animal drugmaker by sales, began investing in Southfork several years ago and earlier this year acquired its technology. The companies didn’t disclose terms of the deal.

Jon Lowe, Zoetis’s head of cattle business, acknowledged that widespread use of the technology could cut some animal drug sales. But he said Zoetis sees that trend as inevitable as livestock and poultry producers scale back antibiotic use in response to consumer demand.

“I don’t think we ultimately lose in the long-term,” he said.

‘Technology is going to be imperative for our business in the future.’

To monitor cattle health, feedlots typically rely on cowboys to ride through pens, watching for lethargic animals that are having trouble breathing. Bovine respiratory disease, similar to pneumonia, is among the most common ailments afflicting beef cattle.

“They want to hide their symptoms from us because they perceive us as predators, and rightfully so,” said Quantified Ag’s Mr. Singh.

For some feedlots, the systems could help fill empty saddles. While the technology isn’t aimed at replacing cowboys, it might make them more efficient, developers say. Instead of scouting for sick cattle across dozens of pens, they will ride out with a checklist identifying the right steers.

“Technology is going to be imperative for our business in the future, for the simple fact that labor is so difficult to come by today,” saidTodd Sigmon, a Colorado-based manager for Dinklage Feed Yards. “Cowboys are somewhat of a dying breed.”