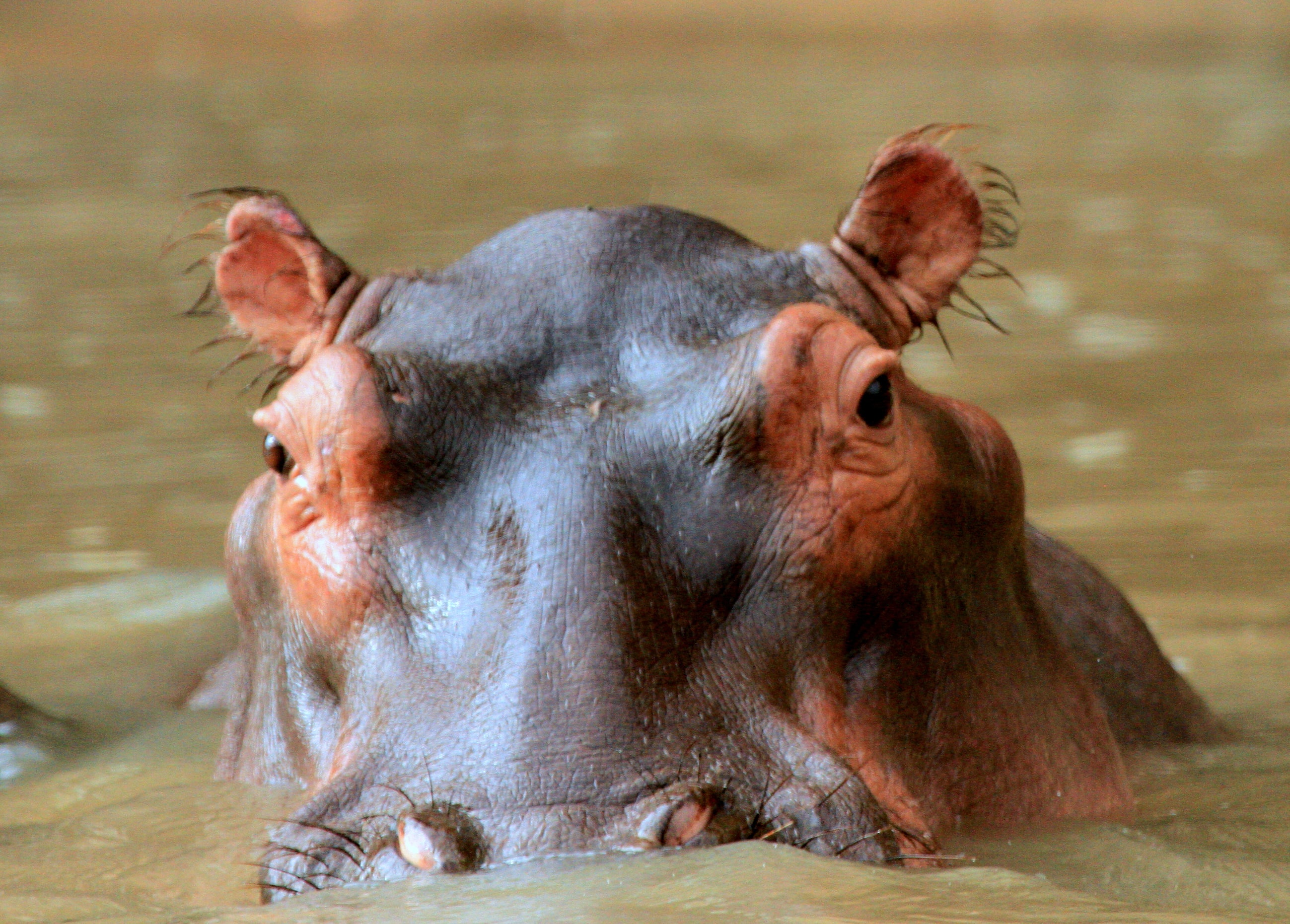 Just 10,000 years ago there was a mind-boggling variety of wildlife on the American continent. There may not have been hippos literally, but there were most definitely animals that occupied their ecological niche.

10,000-years before Columbus, 80% of America’s large animal “types” (genera) – consisting of countless species and their predators – abruptly vanished as ancestors of Native Americans populated the American continent and hunted unsuspecting wildlife that, for the most part, had no genetic fear of humans.

What Europeans found in the Americas around 1492 were remnants of what early Native Americans destroyed. Then, even more damage was done to these remnants.

Natural history shows that increasing biodiversity usually benefits ecological systems, even if some of that comes from so-called “invasive, exotic” species.

And so, depending on how we look at the same set of facts, the accidental release of hippos into Columbia’s rivers and jungles is either a human-caused invasion of an animal that does not belong, or the fortunate though inadvertent restoration of an animal that would already have been there except for human impact. That a horrible drug war led to this proves the old saying, “It’s an ill wind that blows nobody good”.

NOTE: this article was published to NationalGeographic.com on September 26, 2018. It was written by Christie Wilcox.

Some scientists think Colombia’s “cocaine hippos” could help fill-in for long extinct megafauna, while others argue that they should go.

WHEN THE NOTORIOUS drug lord Pablo Escobar was shot dead in 1993, the Colombian government took control of his luxurious estate in northwestern Colombia, including his personal zoo. Most of the animals were shipped away, but the four hippopotamuses—of which Escobar was especially fond—were left to fend for themselves in a pond. Now, there are dozens of them.

For over a decade the Colombian government has been pondering how to best curb the growing population, a strategy largely supported by conservation experts. But not everyone is on board. Without direct evidence that the animals are doing harm, some ecologists argue that there’s no reason to cull or relocate them. Indeed, the hippos could fill in for species that humans pushed to extinction thousands of years ago—an idea known as rewilding.

When the hippos were left behind, it accidentally kicked off a rewilding experiment that’s now been running for 25 years. The first results of this experiment are trickling in and much like the large animals, they’re muddying the waters.

Known Unknowns
The hippos have escaped Escobar’s former ranch and moved into Colombia’s main river, the Magdelena. Spread over a growing area, nobody knows exactly how many there are—but estimates range from a total population of 40 to 60, says Jonathan Shurin, an ecologist with University of California San Diego who studies the animals. Every year there are many babies, but it’s unknown how many reach adulthood.

The hippos present quite a problem for the government. David Echeverri, a researcher with the Colombian government’s environmental agency Cornare, which is overseeing management of the animals, says he has no doubt they act like an invasive species. If allowed to remain unchecked, they will displace endemic animals like otters and manatees, he says. They also pose a danger to local residents since they can be territorial and aggressive, though no serious injuries or deaths have occurred as yet.

After one hippo was killed in 2009, there was a quick public outcry, quashing any plans to cull them. Instead, the government has been investigating ways to sterilize the creatures, or to move them out of the wild into captive facilities, Echeverri says. But the animals weigh thousands of pounds and aren’t exactly fond of human handling, so relocating or castrating them is both dangerous, difficult, and expensive. One juvenile hippo was successfully moved to a Columbian zoo in early September, but it cost 15 million pesos, or about $5,000 USD.

For scientists and conservationists, the ultimate question is how these hippos impact the environment. The animals are foreigners, and in their native habitats they can have dramatic impacts on the landscape. Because they feed on land but excrete their waste in water, they funnel nutrients from terrestrial to aquatic environments. And when they alter water chemistry, they can make fish more vulnerable to predators. By simply moving their massive bodies through muddy areas, they can create channels for water flow that alter the structure of wetlands.

In fact, they affect local ecology so drastically that they’re considered “ecosystem engineers.” And while that makes them key members of African communities, it also means they could have strong effects on their introduced habitats.

What Effect?
To further understand the animal’s environmental impacts, Shurin teamed up with Nelson Aranguren-Riaño from the Universidad Pedagógica y Tecnológica de Colombia, in a project funded by the National Geographic Society. They compared man-made lakes where the hippos hang out to ones they don’t frequent, looking at everything from the area’s ecological diversity to its microbes and productivity.

The project found some slight but detectable differences. Hippos are essentially fertilizing the lakes they frequent with their feces, for example, which is generally seen as a negative for the environment, because it can lead to toxic algal blooms and even die-offs (something that hippos have caused in human-impacted watersheds in Africa).

But, Shurin emphasizes, the differences are really slight—“measurable, but not dramatic,” he says. “It wasn’t like going from a super clean, clear-water lake to a super green lake; it was like going from a very green lake to even greener lake.” And some scientists have suggested nutrient pulses and even fish kills from hippos are actually a feature—not a flaw—of their presence. The addition of nutrients or oxygen-poor waters may subtly influence which species dominate in aquatic communities, or perhaps even increase the total species diversity by creating variable habitats within the river, some researchers suggest. Even large fish kills might have once served as a regular food resource for scavengers.

Jens-Christian Svenning, a biologist with Aarhus University in Denmark, doesn’t think people should assume the worst. In a letter last year in the journal Perspectives in Ecology and Conservation, he and a colleague argued that Escobar’s hippos are one of several species introduced to South America that might provide “ecosystem services” provided by large herbivores that are now gone.

In the case of the hippo, these might include: funneling nutrients from land to water; altering the structure of wetlands; and keeping grassy plants in check (by eating them).

South America lost dozens of giant herbivores in the last 20,000 years or so, including the somewhat hippo-esque toxodonts, which may or may not have been semi-aquatic. “Hippos could likely contribute a partial restoration of these effects, likely benefitting native biodiversity overall,” he says. He’d let the hippos be for now, while monitoring the creatures to ensure they don’t become a problem.

Shurin, however, isn’t convinced that the animals are filling a niche vacated by extinct megafauna. “Certainly there were a lot of other large animals, but none of them were really quite like hippos.”

A Story of Survival
To Arian Wallach, an ecologist with the University of Technology, Sydney in Australia, whether they can perfectly fill a lost niche or not isn’t really the point. She stresses that hippos are considered vulnerable to extinction, and considers having a refuge population outside of Africa to be a boon. “The fact that there are wild hippopotamuses in South America [is] a wonderful story of survival, of agency, of pioneering,” she says.

Wallach is not alone in her positive feelings; the animals have many fans. “There’s a local contingency that sees value in them and wants them to stay,” explains Shurin. “The charisma of the hippos and the fact that they are such celebrities creates quite the complex situation,” Echeverri adds.

They also attract tourists and tourism dollars, which my help offset some concerns about the animals. Upwards of 50,000 tourists visit Hacienda Napoles every year, according to some estimates, although of course not everybody is drawn by the hippos.

For now, without immediate plans to relocate or sterilize all the animals, the creatures will continue to fend for themselves. Only time will tell if Colombia’s “cocaine hippos” will become a permanent fixture of the landscape—or a failed experiment.