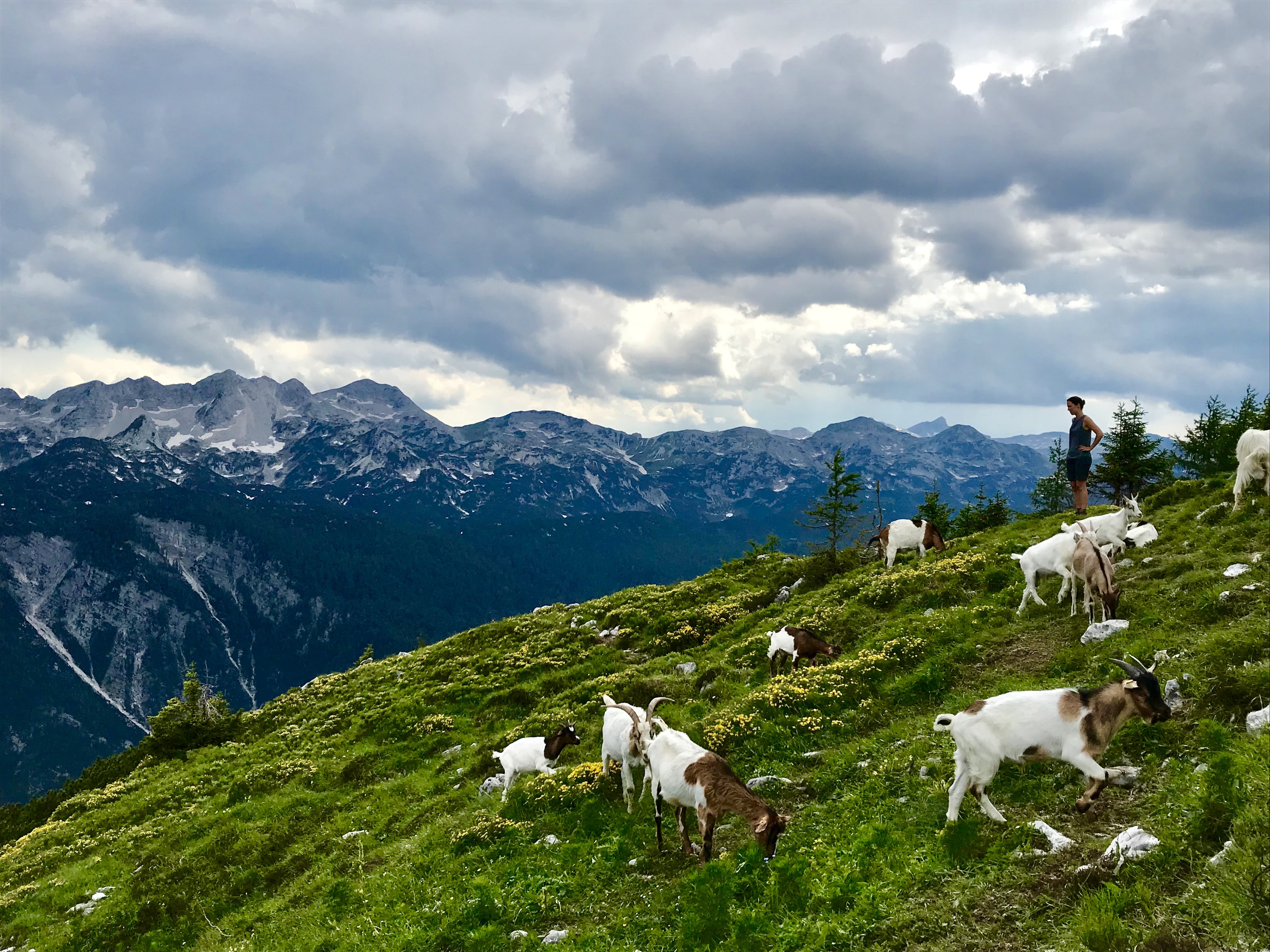 As discussed below, grazing of domestic animals – cattle, sheep and goats – is an effective way to prevent wildfire and improve habitat.

Another species that has great potential for wildfire control is the wild horse.

NOTE: this article was originally published to CivilEats.com on July 8, 2021. It was written by Anna Guth.

In California and across the drought-parched West, programs are springing up to help goats, sheep, and cattle eat down the plants that would otherwise become fuel for wildfires.

As you read this, there are about 150 goats grazing their way through the grass and woodland areas surrounding Fitch Mountain, a local open space preserve in Healdsburg, California, an hour north of San Francisco. The goats will be there for the next few months, eating down the grasses and shrubs that would act as fuel for wildfires across 90 acres.

In a historically dry year, when nearly everyone in the West is bracing for another destructive wildfire season, these animals could be playing a key role in preventing the worst-case scenario. They get rid of the the “ladder fuels,” reducing the potential for burning ground cover to spread to the trees. And they also help protect the people and property in Healdsburg, which has seen major wildfires to the east and the west in recent years.

“We need to create defensible space for residents that live around the mountain: If the preserve catches fire, it will cast embers down into the city,” says Healdsburg Fire Marshal Linda Collister.

It’s the first time the city of Healdsburg has undertaken a large-scale grazing effort, and it received a grant to try it out. There are a range of benefits to having grazing animals do the work, according to Collister. “It’s steep terrain and we would worry about injuries to firefighters. They eat the fuels, whereas we would have to make all that material into chips to burn, which we can’t really do so close to peoples’ homes,” she said. “Plus, they are aesthetically pleasing—everyone loves the animals.”

The goats on Fitch Mountain will be managed by Chasin Goat Grazing, a local company that spends the year helping manage land and reduce fire risk in the area using grazing. But that’s not possible everywhere, so some land and grazing experts—in collaboration with Indigenous partners—have recently found themselves playing matchmaker in an effort to connect property owners looking to get grazing animals on their land and ranchers whose animals could benefit from the extra forage.

“I finally said, ‘Enough!’ [We’ve had] four catastrophic fires and we’re not doing enough with the livestock owners in the areas where vegetation has grown back to continually manage it,” said Stephanie Larson, who directs the University of California Cooperative Extension in Sonoma County and served as a consultant to the Fitch Mountain project.

The Value of Grazing

By the time the sun rose on an October day in 2017, Sarah Keiser could see flames on the horizon and hear a voice over a loudspeaker mandating an evacuation in her home of Penngrove, California. After a sleepless night, Keiser opened the gates on her ranch, releasing the flock of 25 sheep she hoped would survive a low grassland fire. Then, she loaded the dairy goats, which need daily milking, into her pickup.

Fortunately, the Tubbs Fire stopped several miles from Keiser’s property, Wild Oat Hollow Farm, running out of fuel on the surrounding well-grazed ranchlands. Before the fires that ravaged Sonoma County, Keiser had operated the farm and a community grazing project with her neighbors without considering the wildfire mitigation benefits her animals could provide. Now, she advises landowners on fuel reduction— i.e., reducing the amount of plant material that can burn in a wildfire.

Keiser has also worked as a consultant with Larson at the U.C. Extension in Sonoma to keep up with the growing interest. Then, last fall, the extension launched a new online mapping tool called match.graze, which allows landowners and ranchers to make profiles and connect with one another.

California is the second state to offer the online matching tool. Larson collaborated with the South Dakota Soil Health Coalition, which first developed a similar mapping website for South Dakota in 2018 with funding from the U.S. Department of Agriculture (USDA). The hope, says coordinator Cindy Zenk, is that the model spreads nationwide.

Research is still underway on the impact of grazing on wildfire behavior in California, but preliminary results from one recent study showed that grazing can keep fuels low enough for flames to stay below four feet high—a critical threshold that allows firefighters to safely access an area from the ground without heavy equipment.

On the ground, it appears that all grazing animals appear to have the potential to help, but the study only focused on cattle, pointing to the need for their strategic use in overgrown areas, on public lands, and along the wildland-urban border. Ranchers see an opportunity to ramp up grazing in California, where today the number of beef cows are around 57 percent of their peak numbers in the 1980s. There’s also the potential for keeping more cattle on pasture longer and “grass finishing” them for consumers rather than sending them to feedlots after the first six months.

And there is some encouragement from state legislators: A new state-level bill, AB 434, encourages state land managers to offer extended leases to grazers specifically to mitigate wildland fire.

Sheila Barry, a U.C. Extension livestock and natural resource advisor and a contributor to the cattle study, highlighted that as long as land managers use practices, such as rotational or “managed” grazing—which involves regularly rotating the animals between separate pastures or “paddocks”—there can be myriad additional ecological benefits besides addressing wildfire. Barry’s research has shown positive impacts for special status species, such as the California Condor. She also found evidence that the managed grazing can help control non-native plants, providing habitat for pollinators, and sequestering carbon.

According to Barry, around half of the beef cattle in California leave the state during the dry months to graze, a strategy employed by ranchers to keep their livestock on the best forage. A program like match.graze could help facilitate more movement within the state, she said.

In South Dakota, the impetus for creating the online matchmaking tool was multifaceted. On the one hand, integrating livestock on cropland is one of five key pillars of soil health identified by the South Dakota Soil Health Coalition, founded in 2015 by agricultural producers. The nonprofit says grazing can reduce the need for tillage, balance key nutrients such as carbon and nitrogen, relieve weed pressure, and deliver better-quality feed for livestock.

At the same time, livestock managers in South Dakota struggling with drought and fire—the Windy and Divide Fires burned thousands of acres of agricultural land just this year—are in need of forage for their animals.

“California and South Dakota are two different places, though there are similar aspects,” said Zenk, who coordinates the South Dakota program. “We saw the need in places without livestock but with good forage available and ecological opportunities. Also, during drought, we want producers to keep their assets and not get rid of their livestock.”

The matching programs have attracted nearly 5,000 users each in South Dakota and California.

Steven Pozzi, a fifth-generation rancher from Tomales, California, recently graduated from California State University, Fresno with a degree in agricultural business; he has been hired by several landowners through match.graze to graze his growing herds of cattle and sheep on their properties. “It’s really difficult as a young agriculturalist to build up your own herd, and this has been a big opportunity for me,” he said. “It’s a good way to get experience on a small scale on how to run a business.”

This year, Pozzi plans to set up a small number of beef cattle to eat the tall grass around a housing development in nearby Petaluma. Transporting his cattle, securing drinking water for them, and setting up fencing all take time and effort, but Pozzi said the contracts were helping his bottom line.

Making a good match involves understanding which species are right for which properties, underscored Larson, the U.C. Extension director. The general rule of thumb is that cows are best for tall grasses, while sheep take down the grasses lower to the soil; goats, which are browsers, can tackle brush and navigate steep, wooded terrain.

Larson is offering education through the extension, and looking to Keiser and Indigenous partners who were hired last year by a consortium of local groups to offer their expertise in a three-year pilot program called Intersectional Land Stewardship.

At home, Keiser operates the Penngrove Grazing Project and rotates her sheep and goats on seven neighbors’ properties—a model she is seeking to replicate for landowners in other Sonoma neighborhoods. The community grazing projects not only make hiring grazers more affordable, but it has also attracted willing livestock owners, for whom larger projects are more enticing.

Sometimes, the benefits for the livestock owners are lower, Keiser said, considering the quality of forage can be low and they still have to buy supplementary feed for their animals while they work. Terrain, access to water, and fencing all vary, meaning that the cost to landowners can range from around $1,000 to $1,500 per acre.

One of Keiser’s advisors is Clint McKay, an enrolled member in the Dry Creek Rancheria Band of Pomo Indians and the Indigenous education coordinator for the 3,200-acre Pepperwood Preserve. Another is Dr. Peter Nelson, a tribal citizen of the Federated Indians of Graton Rancheria and an environmental science professor at University of California, Berkeley. McKay and Nelson are providing consultation on Indigenous land stewardship practices including prescribed burning and grazing.

“Grazing is something we look at to try to mirror what would have been done here pre-contact,” McKay told Civil Eats. “We don’t have the open mountains and plains here like we used to, and there are a lot of properties that need grazing and ground disturbance—the deer can’t do what they want anymore, and there are no longer elk roaming Sonoma.”

Often, an ideal scenario is for grazing animals to reduce fuels prior to a prescribed burn. When done together, McKay says the two strategies provide a range of ecological benefits in addition to wildfire mitigation. Since the disasterous 2017 Tubbs Fire, McKay said interest in Indigenous methods of land management in the region has increased tenfold; his phone has been ringing off the hook.

“Every piece of land is different: There is no protocol or cookie-cutter format. A lot of study goes into it, looking at what wildlife is there, what impact is there, and what our goals are,” he said of the practices he grew up learning. “What I’m bringing is Indigenous knowledge from a people who have stewarded this land since the beginning of time.”

As the goats in Healdsburg graze across Fitch Mountain, Stephanie Larson is planning ways to engage the public in the effort, including a potential youth training program in partnership with a local Future Farmers of America chapter. “They might take on working with the goat owner, learn the trade, and start their own grazing project,” Larson says.

She also plans to start a fund to offset the grazing project in future years.

For Collister, the fire marshal, a lot of the benefits of using grazing is the fact that they make her team’s prevention work more visible to the city’s residents at a time when many are on edge, bracing themselves for the first scent of smoke. In a typical year, she would send teams of firefighters out with chainsaws and other tools to reduce the fuel, but their work would mainly go unseen.

“At this point, just seeing goats out there will make people more relieved because they are going to be right along the perimeter, [grazing] right up against where people live,” said Collister. “We did that purposely because people need a break and they also need to know that we’re doing something.”