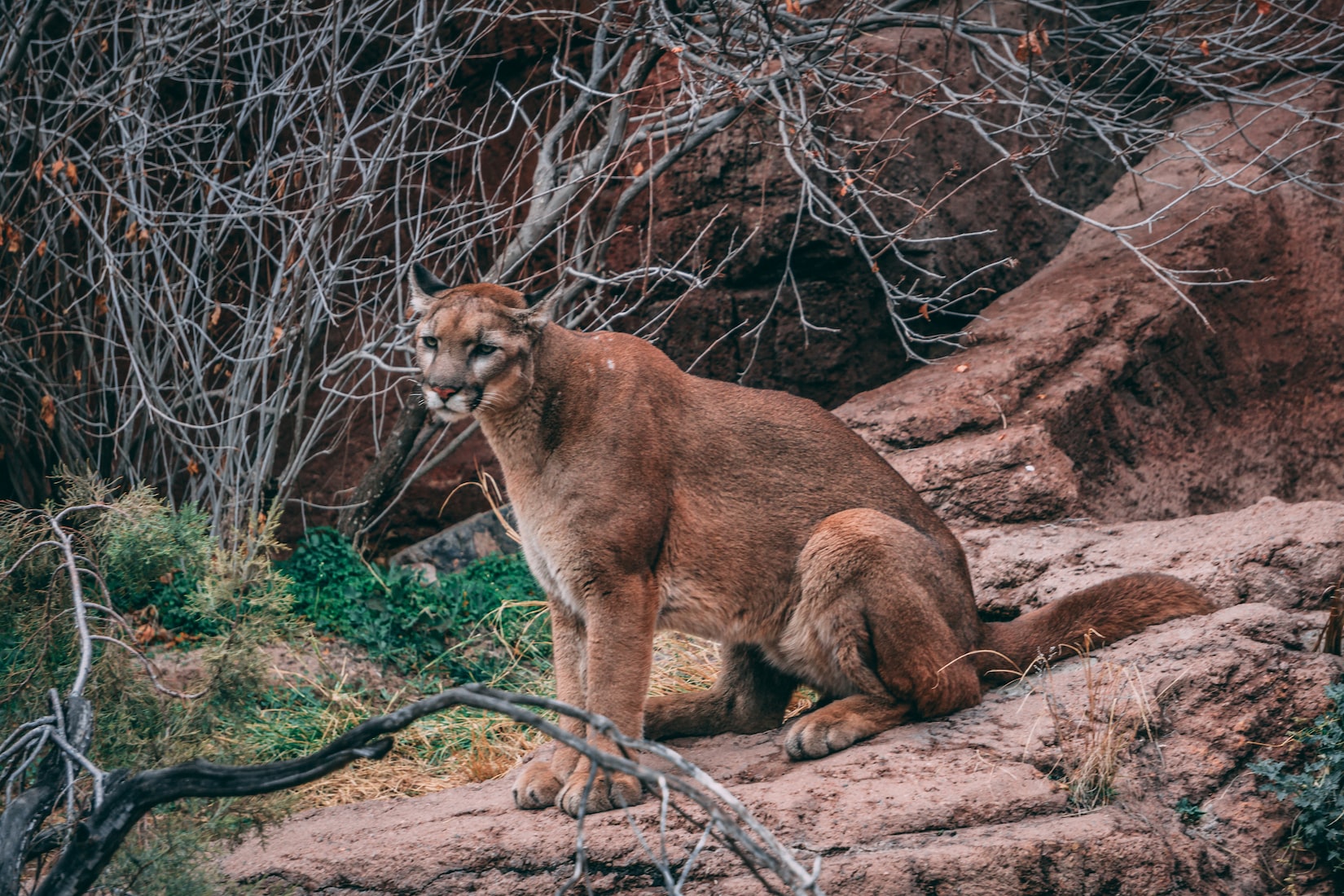 Our public lands, parks, forests, and the wild animals that live in them seem increasingly unhealthy and disease prone. However, the cougar disease discussed in the National Geographic article below is a symptom of a larger problem.

About 70-years ago, Dr. William Albrecht, who has since been dubbed “The Father of Soil Fertility,” wrote, “It is not the overpowering invader we must fear but the weakened condition of the victim.”

Professor Albrecht was mocked when he warned that reliance on chemical farming would lead to “Malnutrition, attack by insects, bacteria and fungi, weed takeover, crop loss in dry weather, and general loss of mental acuity in the population, leading to degenerative metabolic disease and early death.” It turns out he was right, and that epidemics of people and of animals are two sides of the same coin.

For 70-years, industrial agriculture has increasingly assaulted ranges and farmlands with chemicals, poisons, antibiotics, additives and unhealthy, unsustainable practices. In general these harm the health of the system of which all life is a part; specifically, they reduce soil health.

Despite advances in medicine and technology which treat disease, natural resistance to new — and old — illnesses has been reduced. And so we recently have suffered novel epidemics from AIDS to SARS to Covid-19, and outbreaks from diseases that have been around for years but were not problems for healthy populations.

Dr. Albrect’s warnings also apply to the wild animals with whom we share this world. Their habitat is decreasing and most of what remains is far from natural, and, it suffers from what is done elsewhere. Wildlife “management” of these animals and their habitat shares the mentality of industrial agriculture and uses many of its practices. Increasingly, it attacks biodiversity with poisons, eradications and other harmful actions – and equally harmful inactions.

The result? Almost everywhere, we find new and old diseases attacking wildlife populations, – including in wildlife management’s crown jewel: Yellowstone National Park. Consider the inexplicable and seemingly irreversible decline of so many species on land and sea. These trends are “mysterious” only to the “experts” who assume their accepted practices do not harm systems and everything living in them, and spill over to everything else.

Albert Einstein is said to have remarked, “Insanity is doing the same thing over and over while expecting a different outcome.” We change outcomes by recognizing that these wildlife illnesses are symptoms of a much larger issue, and destruction of habitat health is the root cause.

Healthy soil, which is the quickest measure of system health, is the basis of healthy, diverse vegetation that is the foundation of healthy habitat; therefore, a good first step would be reevaluating all farming, ranching and wildlife actions by asking: Does this help or harm soil? Then, taking a page from medicine, redirect our vast knowledge, technologies and science to managing our natural resources by doing no harm to soil or the life that depends on it.

NOTE: this article was originally published to NationalGeographic.com on April 3, 2020. It was written by Jason Bittel.

While the world reels from coronavirus, big cats of the U.S. West are succumbing to their own pathogen, which can be spread to people.

In the winter of 2006, researchers studying cougars in Wyoming got a ping from the collar of a cat known as F018. According to the collar’s mortality sensor, the female hadn’t moved for eight hours or more—usually a bad sign.

By the time someone tracked the signal to the base of a large tree, F018 was dead. Worse still, she was not alone. There in the snow, tucked up against the larger cat’s side, was a younger cougar known as F063, who appeared to have passed away some time after her mother.

“Everyone assumed it was starvation,” says Mark Elbroch, cougar program director for Panthera, the global wildcat conservation organization. After all, “it was the middle of winter.”

But tissue samples sent to Wyoming’s Game and Fish Department revealed another fate. “We were as surprised as anyone to learn that the cats had died of plague,” Elbroch says.

Most people associate the plague with the Black Death, a pandemic that killed between 50 million and 200 million people in Europe and Asia in the 1300s—at least half of Europe’s total population at the time. But the disease is still around today. Caused by a soil-living bacterium known as Yersinia pestis, plague can infect small hosts, such as fleas, and then jump to ground-burrowing rodents, and so on up the food chain.

On average, the bubonic plague—the most common form of the disease—infects seven people each year in the United States via rodent-riding fleas, usually in rural areas. However, larger outbreaks do still occur, such as the one that claimed the lives of 202 people in Madagascar in 2017. Luckily, modern antibiotics can easily treat the disease, and it is not necessarily fatal.

After finding the dead big cats, Elbroch and his team spent the next nine years getting blood samples from living and dead cougars in the Greater Yellowstone Ecosystem, an area of more than 34,000 square miles that extends outside the national park in Wyoming and into Montana and Idaho. (Read more about the secretive lives of cougars.)

In all, the scientists discovered that nearly 50 percent of the 28 cats tested had plague antibodies in their blood, meaning they’d been exposed to the bacteria at some point in their lives—likely from eating rodents or other predators that eat rodents. Seven percent of the adult and juvenile animals studied died from the plague and the pneumonia symptoms it causes, according to the scientists’ new study, published in the journal Environmental Conservation.

“It highlights that the Greater Yellowstone Ecosystem is probably an area with far more plague prevalence than anyone thought,” Elbroch says.

Cougars are not considered threatened by extinction, but such research is crucial for creating conservation and management plans for the species, which is rebounding in parts of its former range.

In 2008, a Connecticut teenager contracted plague after visiting Yellowstone National Park with his Boy Scout troop. Fortunately, the boy recovered, but no one knows how he got it, highlighting the disease’s elusive nature.

The curious case of M021

For all the damage plague has done to humankind over the centuries, much about the pathogen remains a mystery.

“We don’t exactly know how it persists or why it persists in certain areas in the soil longer than others,” Elbroch says. (Read how the spawn of the Black Death bacteria still live on.)

And while the bacteria have been found in more than 200 mammal species, it’s not clear which animals act as reservoirs and spreaders. Canids, like dogs and wolves, seem to be more resistant to its ill effects than felids, like cougars (also called mountain lions and pumas), bobcats, and Canada lynx.

One cat, known as M021, particularly illustrates the enigma of the plague, says Elbroch.

When this male was first caught, he tested negative for plague. Two years later, he tested negative again. The third time, his blood showed plague antibodies. The fourth and final time he was captured, the animal appeared healthy and tested negative, and when he died in 2012, it was likely from exposure to rodenticide. Apparently, the big cat had recovered from his bout with the plague. (Read about the threatened species bouncing back in Yellowstone.)

While the fact the animal survived is fascinating, it also means that researchers studying the outbreak can’t just test a cat once—for accuracy, an intensive sampling effort over many years is needed.

“The most valuable data here are the repeated samples from the same individual over time,” says Sarah Bevins, who studies pathogens that move between wildlife, people, and domestic animals for the USDA’s National Wildlife Research Center in Fort Collins, Colorado. (Learn why cougars are called “ghost cats.”)

“Capturing a cougar even one time is not a trivial effort,” she says.

People at risk of plague

The research also shows “plague is very much a part of the landscape in the western U.S., and wild animals are frequently exposed to it,” Bevins says.

That’s why this research should be noted by people who handle wild animals and livestock, living or dead, the scientists say. In 2007, biologist Eric York died after contracting plague from a cougar he’d necropsied.

“Eric’s death was shocking for everybody. And it rippled through the community and certainly raised awareness,” Elbroch says.

Hunters kill about 3,000 cougars legally each year in the United States, and wildlife laws require that each of those cats be brought to authorities for inspection. Right now, those carcasses aren’t being tested for plague in an organized way—but if they were, Elbroch says, it could help scientists track the pathogen’s prevalence.

“Bubonic plague … is easily treated as long as a medical practitioner has it in their brain that what they might be looking at are symptoms of plague,” he says. These vary depending on the type, but can include visibly swollen glands, fever and chills, weakness, and even blackened tissues on the fingers, toes, and nose.

“Just being aware that it is a possibility is a huge first step [toward] increasing safety for people.”